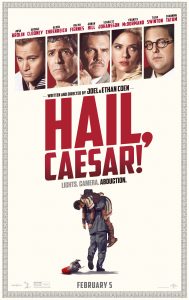 The Coen Brothers are some of the greatest directors alive. Any director with films like Raising Arizona, Barton Fink, Miller’s Crossing, The Big Lebowski, Fargo, O Brother, Where Art Thou?, No Country for Old Men, A Serious Man, True Grit, Inside Llewyn Davis and The Ballad of Buster Scruggs individually would be a director worth keeping an eye on. In 2016, after nearly a decade of serious dramas and period pieces, they returned to the genre of comedy with one of the best films of the 2010s!

Violence/Scary Images: Several characters are slapped.
Language/Crude Humor: Mild language throughout including a**, d***, h*** and g**d***.
Drug/Alcohol References: Lots of smoking and some casual drinking. References to actors requiring rehab.
Sexual Content: References to sexuality; nothing serious described or depicted.
Spiritual Content: The lead character is a lapsed Catholic struggling with a personal crisis. The story follows an attempt to shoot a religious epic; themes of faith, religion, and God.
Other Negative Content: Some irreverence to the concept of God and faith.
Positive Content: Themes of hard work, purpose, and meaning. 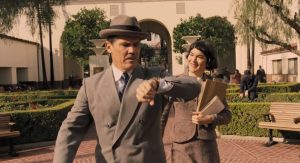 It’s not an original thought of mine to say that the Coen Brothers are among the most spiritual directors working today. Despite being ardent atheists, their films are seeded with a sense of spirituality, moralism, and tragedy that appeals to Christian audiences. In the past decade, their most notable film on this front is their comedy Hail, Caesar! The film was released to initially lukewarm reactions in early 2016, but has progressively earned its status as a cult classic and a minor masterpiece. When judged alongside other Coen’s masterworks like No Country for Old Men, Fargo, and Inside Llewyn Davis it hardly compares, but that’s no fault of the film itself.

If you subscribe to the Aristotelian notion that all stories can either be considered tragedies or comedies, this film definitely falls into the latter category. It’s a classical comedy in the sense that it’s merely a bit of light-hearted fun where little of serious consequence happens and the story ends on a happy ending. As a whole, the film is a bit of a lark that just wants to dance with the ideas it’s having a laugh at their expense; those ideas being Christianity, communism, and the romance of the golden age of Hollywood. 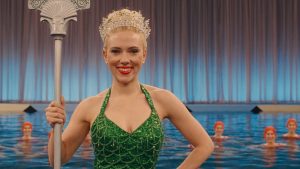 Hail, Caesar! is a day-in-the-life story about the golden age of Hollywood in the 1950s. Our main character is Eddie Mannix, a studio fixer whose job is to harass and beat dissonant voices and keep the chaotic nature of the Hollywood film-making machine working. It’s a difficult job. He’s surrounded by angry artists, actors with insane personal lives, and strict deadlines. He boss—an off-screen presence who we never see depicted—barks strange arbitrary orders at him from across the country without taking into account whether casting a cowboy actor in a prestige drama is a good idea or not. Somehow, Mannix has to work to get all the disparate forces of life in order to keep the movie-making machine humming.

Mannix is introduced as something of a faltering Catholic. He suffers from massive Catholic guilt and visits a confessional booth almost once a day to admit to some minor sin, like lying to his wife about smoking or over-zealously striking one of his workers. We find out that he’s struggling with a crisis of conscience as he’s being offered the chance to start a new career with the Lockheed Corporation which would give him a more legitimate job with better hours and easier work. He’s unable to come to a decision on the offer though because of how busy his work keeps him on a day to day basis. His life is chaotic and he doesn’t get home most days until late at night after his children are asleep. Mannix’s life is happening in tandem with the shooting of Capital Picture’s largest films of the year: a biblical epic called Hail, Caesar! A Tale of Christ. Keeping that film in production becomes Mannix’s primary task in addition to micromanaging the dozens of other productions ongoing at his studio. 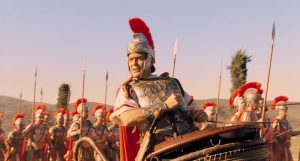 Much of the film’s structure is littered with little moments that exist to tease the characters for their moral seriousness. If the movie is allergic to anything, it is earnest depictions of grand ideologies. This is a film about bumbling characters who need a man like Mannix around to keep them moving in the same direction. The movie further undercuts this with a conspiracy plot that drives the film’s central dramatic arc. The lead actor in Hail, Caesar! A Tale of Christ, Baird Whitlock, is kidnapped by a group of communist screenwriters who want to indoctrinate and ransom him to the studio for money. Mannix is so encumbered by the realities of his job that he doesn’t have time to intimately investigate his disappearance. His honesty and ability to delegate does unintentionally set forth the chain of events that do result in Whitlock being saved though.

The movie’s most consistent joke when it directly depicts old Hollywood film, the Christian faith, and the communist sympathizers, is its tendency to undercut their dignity and legitimacy at every point. The movie does this constantly. At one point, Mannix is watching an early edit of Hail, Caesar! A Tale of Christ, and a scene of Saul having his “Road to Damascus” moment is undercut by a title card saying “Divine Presence to be shot later”, as though God himself is an afterthought or non-existent. When we meet the communists, the dread of their company and power is frequently undercut by their stupidity, or by the presence of a small cute dog zooming around their looming shadows. 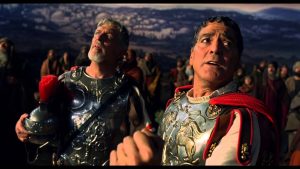 The movie constantly pays homage to older films while highlighting the absurdities of classic Hollywood movies and how they’re made. Western characters are played up like absurd cartoon characters and imbeciles. A musical number involving sailors dancing in a bar highlights the extreme homoerotic undertone of its actors and dancers. Actresses known for their incredible personalities are shown offscreen as angry and petulant fictions. Hollywood is not presented as a deeply romantic place but as one of extremely hard workers, moral louts, and impulsively weak people who are merely hired because they have one aspect of themselves that’s useful to the studio. Despite their weaknesses, they can come together to create moments of transcendental beauty in their work that surpass their own individual limitations.

The movie’s greatest secret weapon in exploring these themes ends up being its breakout role of Alden Ehrenreich as Hobie Doyle. The movie finds its clearest and most moral character in this role as it plays the absurdity of Hollywood against the realities of the arbitrary authorities above them. Doyle is a western actor who is introduced playing an extremely athletic and talented action star, parodying John Ford’s work. Against their better judgement, he’s recast as a prestige actor in a subtle drama film about love and infidelity. In the film’s funniest scene, the world’s most wooden actor tries to deliver genteel dialog, infuriating his director in the process. 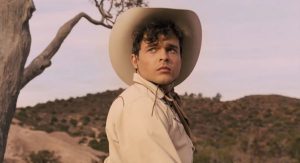 His story ultimately ends up being a contrast to Mannix’s journey, and highlights the importance of being where you’re most needed. Doyle is a great actor when he’s playing the right part and when he’s on point; he’s the most useful character in the entire movie. As a result, the film becomes a story about the importance of being the right person, in the right place, at the right time, and what good that can do for the world when the people with the ability to do the right thing do it by their own volition and ability.

Naturally, the Coen Brothers themselves are more interested in the process and the humanity of its players than the implications of the art itself. As Baird Whitlock’s final scene shows, the one thing they can’t bring themselves to have is faith in something external from human experience or struggle. There is only the beauty of the moment followed by man’s inevitable ability to screw it up. Hail, Caesar! might be considered somewhat offensive given its indifference to faith and Christianity, but the movie seems to suggests a deeper understanding of human frailty and the value of storytelling. By the film’s conclusion, the story finds some relief for Mannix in his realization that there’s honor in doing the right thing even if it’s hard. He finds meaning in his work by knocking the right heads at the right time because it creates something greater than himself: great art! While the film itself may not be a great work of art, it’s a great comedy I find myself revisiting yearly for its clever humor and utterly unique story.