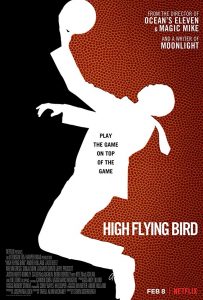 Indie film legend Steven Soderbergh is back once again with his second attempt to shoot a feature film on an iPhone. As gimmicky as that sounds, the acclaimed director of Ocean’s Eleven and Logan Lucky is the kind of experimental director to pull such an idea off. He gives us a sharp, biting drama about the behind-the-scenes workings of professional sports. 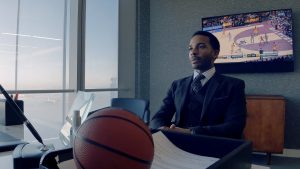 I know nothing about basketball. I do know a lot about Steven Soderbergh, however, and anything with his name on it is something worth seeking out immediately. Soderbergh is one of the greatest voices on the independent film scene. The man broke out onto the independent film scene with his small budget film Sex, Lies and Videotape before beginning a long and diverse career directing films like The Ocean’s Trilogy, Out of Sight, Traffic, Haywire, Contagion, Haywire, and Magic Mike. He technically retired in 2013 with his “final” film Side Effects, but came out of retirement a few years later with his comeback thriller Logan Lucky, a heist film set against the rural American south. His new films have been noticeably smaller and more reserved than his globe-trotting larger scale thrillers like Contagion, but where he lacks scale he makes up for it with depth. Even without the larger budgets of earlier films, he’s a director with immense dexterity and a penchant for selecting excellent and intelligent scripts. He’s also an extremely versatile filmmaker who famously fudges film credits so he can have his hands directly on the directing, cinematography, and editing. His films look rather bare bones at times, but they’re extremely efficient.

Last year, he treated us to the small scale, politically charged thriller Unsane shot entirely on a modified iPhone 8. The movie was a tense, old-school thriller with a lot on it’s mind regarding the healthcare industry and trauma brought about by stalkers. His newest film, High Flying Bird, was announced last year, and I immediately took interest based on his involvement regardless of my disinterest in the subject matter. Lo and behold, the movie got immense buzz at Sundance and was bought by Netflix. Like his previous film Unsane, this one uses his gimmick of shooting with a modified iPhone 8. The visuals of the resulting film are somewhat awkward and stiff at times, but it does have a unique look to it. The movie looks decidedly better than it’s predecessor. He’s getting the hang of learning how to shoot entire films with wide angel lenses and limited color schemes, but High Flying Bird’s look at times is consistently crisp and occasionally dazzling in some scenes.

The story is fairly dense if you’re not a fan of basketball, but it’s got a lot on it’s mind. Set during a college basketball lockout (I.E. the league isn’t letting anyone play until their clients agree to their terms), a group of talent agents are left juggling the interests of their players, the coaches, and their own lives as the tension builds between the different factions. The movie is largely a series of office arguments and negotiation deals between rival talent agencies and the league itself as they try desperately to keep their players in line, make agreements, and go behind one another to get the players on the court with or without the approval of the league. There’s hardly any time in the film actually dedicated to seeing people play on the court. One of the few scenes we actually get to see of young people in the gym ends swiftly with their coach forcing the trope to run laps for the duration of the scene. The film as a whole has more interest in the people who work behind the scenes of the sport than the sport itself.

The movie muses on many concepts, from the exploitative financial side of professional sports to how race factors into the equation as these rivaling factions try to come to some level of agreement without stepping on toes. Forgive the incorrect analogy, but the information can be rather overwhelming at times with its inside-baseball terminology at times. As I said, I’m not viewing this as a sports-ball fan, so my interest in this is entirely based on the filmmaker’s approach to the material. Leave it to Soderbergh to take such a dense topic and sort his way through it effortlessly. Nowadays, Soderbergh very rarely writes his own scripts (although the lack of screen credits for Logan Lucky’s screenwriter suggests otherwise); instead, he prefers to handle every other aspect of production. The script was written by Moonlight scribe Tarell Alvin McCraney who guides the viewer through the complexities of the league and its financial class effortlessly. He’s a very talented screenwriter and his nuanced writing is a good pair for Soderbergh’s formality. One of Soderbergh’s largest influences as a director is All the President’s Men, and it’s clear he has a love for the complex, wordy, and intelligent thriller that shines even in his more overtly audience friendly films like Haywire.

High Flying Bird might not be the film audiences will care most about, but it’s an essential one for fans of Soderbergh and basketball who will love it’s sharp story and attention to detail. There’s a reason the film hit it huge at Sundance. Of his recent post-retirement trilogy of Logan Lucky, Unsane, and this, I would wager this is probably the strongest piece of filmmaking of the three. However, I personally prefer Logan Lucky for it’s crowd appeal. The film is a great indicator of where Soderbergh’s head is at right now and how passionately he’s jumping back into film. His next film The Laundromat is a political thriller due to release on Netflix later this year with a screenplay by Scott Burns (who also wrote the screenplays for Contagion and Side Effects). I’m excited to see what he conjures up next! 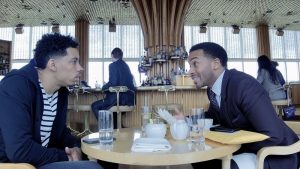 + Continued and clever attempts to film features with iPhones + Sharp, intelligent script that finds drama in the financial side of sports + Empathetic characters that drive the story

High Flying Bird is essential viewing for fans of basketball and Steven Soderbergh's filmography as a whole. It's an intelligent and thoughtful drama that finds interesting things to say about professional sports.