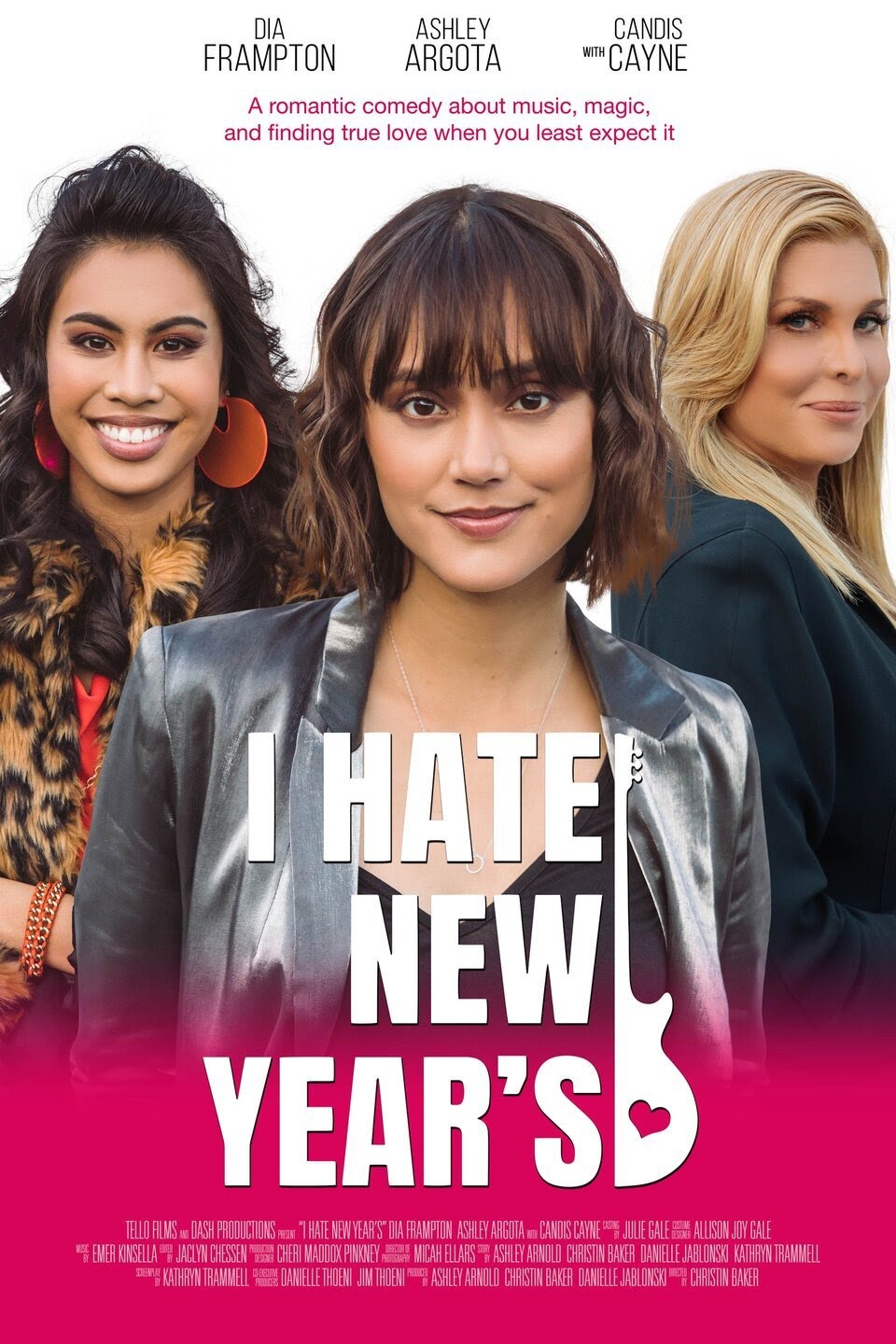 Tello is a smaller streaming service that has carved out a niche for itself producing independent, female-focused and LGBTQ+ films for a nominal monthly fee. Their newest film I Hate New Year’s is a holiday flick in the grand tradition of the Hallmark indie romantic comedy that uses the cozy framework of that kind of genre to tell a story about two successful women finding love. 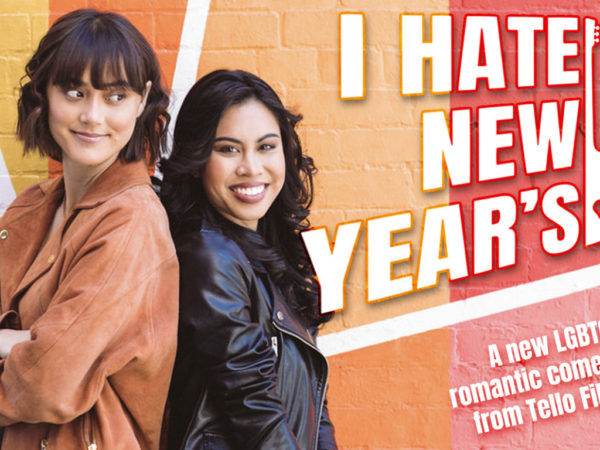 Disclaimer: Geeks Under Grace received a screener from Tello to review the film prior to its release date.

One of my great film critic immortal sins, besides enjoying the Transformers movies, is that I quite enjoy Hallmark romance movies! I recall watching Broadcasting Christmas (starring Dean Cain) and The Lost Valentine (starring Betty White) and feeling quietly smitten by these low-key, cheaply made romantic comedies.

As far as I can tell, my fascination was purely reactionary. I kind of enjoyed seeing these very complacent dramas about normal people with normal problems and families who attend church find love. The drama in these movies is very pedestrian and the solution is always for the high-profile man and the strong, confident businesswoman to put aside their differences and find the love that clearly existed between them right from the start.

Most Hollywood romance movies are required to have graphic sex scenes (Call Me By Your Name, Blue is the Warmest Color, The Favourite) or to be purposely transgressive and anti-heteronormative (The Shape of Water, Brokeback Mountain). There are more movies nowadays about why marriage and traditional relationship stories are a damaging social construct than sincere romance films (The Lobster, Marriage Story, Little Women, Happy Go Lucky).

There are exceptions of course (See: La La Land) but new Hollywood is far more interested in being casually transgressive than old Hollywood, for good or ill. That’s a shame because you’re going to see a lot less classical love stories like His Girl Friday or The Lady Eve in modern Hollywood. It would be nice if Hollywood could deliver on both ends of the discussion of normative human relationships at once. 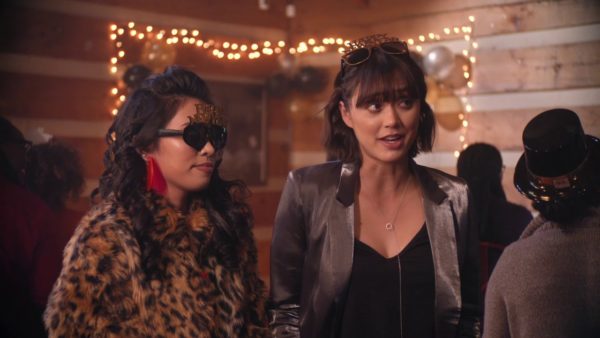 Thus my fascination with Hallmark. These films aren’t transgressive at all. They’re a cozy blanket of domestic comfort and order in a world of transgression and constant change (for good or ill).

As such, I went into I Hate New Year’s expecting something along these lines. As a low budget romance film, I’m perfectly happy to grade on a curve if I get my quick shot of romance and dopamine for the experience of 90 minutes of light drama.

I Hate New Year’s isn’t a traditional Hallmark romance drama though. Let me get the elephant in the room out of the way: it’s an independently produced lesbian romance film.

This is a Christian website after all and I’m sure there are arguments to be had about how we ought to engage with that sort of material but I’m going to go ahead and limbo under that discussion. I have no interest in relitigating that culture war. I was pretty much game for the film so long as I got some cutesy romance and light drama to make it all feel worth it.

That’s pretty much what the film delivers. It’s pretty straightforward and inoffensive so far as most rom-coms go. There’s not heavy petting or sexuality outside of kissing and romantic proclamations. Even the overt LGBTQ+ elements of the story are toned down and don’t feel too campy or exploitational outside of one or two of the performances. If you’ve seen a Hallmark film though, you basically know what you’re getting into. 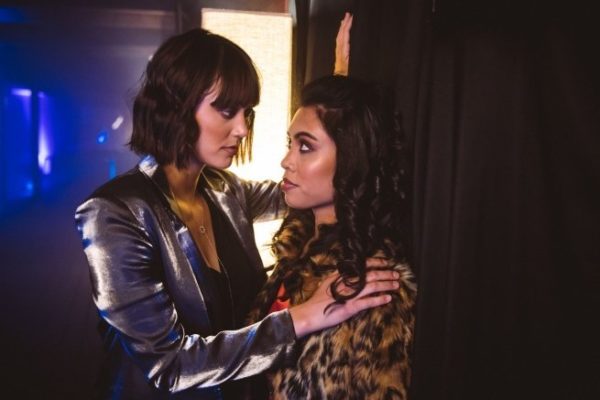 Our main character, Layne Price, is a highly successful queer singer/songwriter living in California who has hit a period of creative stagnation. After consulting a fortune teller who gives her flamboyant advice, she flies to Nashville, TN, for New Year’s Eve to spend time with her best friend, Cassie, whom she hopes can inspire her to get her work done. Cassie is also a queer musician who works as a country singer and has very strong romantic feelings for Layne.

While Layne wants to downplay her trip and stay under the radar, Cassie has made it her mission to take her out on the town to all of the local New Years’ Eve parties with her friends. While she’s out, Layne ends up performing some impromptu concerts that start trending, creating a social media buzz that these two stars are secretly in love and about to drop a new album with the start of the New Year!

Layne’s aggrieved talent manager Toni, initially frustrated by the fact that she’s not doing her job, calls her and encourages the two to keep up their improvised publicity tour because of all the positive attention it’s bringing them on social media from fans who are ravenous at the thought of a new queer celebrity couple. As the two complete their night’s festivities, they quickly go on something of a personal journey and discover their mutual feelings for one another.

Nothing about I Hate New Year’s is especially shocking. The veneer of being a self-proclaimed LGBTQ+ Rom-Com does carry some expectations with it but it really doesn’t translate to much on-screen besides allowing some relatively no-name gay actors and actresses a chance at a feature film role.

Being what it is, it’s quite cozy and laid back. Some of the original music for the movie are solid acoustic love songs that play well as comfortable lounge music. The actors mostly do a good job holding their own in their performances for a film of this caliber, although there aren’t many standouts. Dia Frampton does the best work in the film with her titular role, giving a very naturalistic performance that feels the strongest of all the ones on the screen.

I could comment about some of the over-lit cinematography that’s clearly shot on someone’s DSLR camera but this is hardly the worst offender I’ve seen in that regard in this genre. The final film pretty much comes together even though there are a few scenes that feel dramatically undershot and poorly performed. The concert scenes definitely come to mind as it’s pretty clear they had to make do with a small crowd, a small location, and a single dolly camera bouncing around in the audience which looks awkward in execution.

Cheap production and melodramatic performances are part and parcel for the genre though and I’m not inclined to punish a film that sets out to be a corny, low budget romance flick for being exactly what it wants to be. I’m not exactly sure how well it would play to the traditional Hallmark audience of wine aunts and Baptist grandmas who like inoffensive chick-flicks but I could definitely see this working with some of them given how tame the content is.

I Hate New Year's is a solid little romantic comedy in the vein of some of the most popular indie rom-coms currently in vogue! If you like laid back, low stakes romance flicks, you could do worse than this!