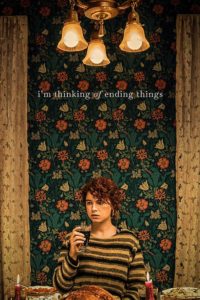 Charlie Kaufman movies are always intricate puzzles with complex themes brewing under the surface. Of any screenwriter working today, he has one of the most authoritative voices and distinct visions informing his writing. His voice is that of an avid neurotic existentialist who seems befuddled by the very nature of existence and the implications of what it means to be a human. Most of his movies are about self-loathing artists or loners struggling with the reality of their inability to capture the human experience or express meaning authentically. With his newest film, he continues his nihilistic journey into the self with one of his most abstract and bickering films to date!

Violence/Scary Images: A person is stabbed bloodlessly.
Language/Crude Humor: Moderate to excessive language throughout the film.
Drug/Alcohol References: Characters frequently drink and smoke casually.
Sexual Content: Nothing depicted but characters make infrequent references to their sex lives and relationships. An old man is seen fully naked from the back.
Spiritual Content: Characters talk briefly about God but both characters seem to be implicitly non-religious and somewhat bleak in their outlooks about life.
Other Negative Content: Some crass discussions of God, meaning, sex and life.
Positive Content: Themes of self-reflection, relationships and needing honesty. 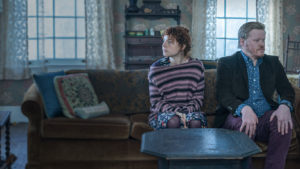 I frequently find myself left somewhat cold by Charlie Kaufman’s films. Don’t misunderstand. Kaufman might be one of the best screenwriters alive! I just don’t relate to his distinct air of malaise and nihilism. His films can be brilliant, such as how Adaptation satirizes his own inability to adapt a challenging book into an effective screenplay, or how Being John Malkovich uses a gimmick premise to tell a story about body dysmorphia and true (lesbian) love, or how Anomalisa captures middle-aged anxiety, discontentment and inauthenticity.

His films though are undercoated with a layer of self-loathing and self-doubt I don’t appreciate. Synecdoche, New York and Eternal Sunshine of the Spotless Mind may have been two of the best written films of their decade but the depression and moral emptiness that informs their premises about lost time and love is pungent. To date, I don’t believe I’ve watched the majority of his films more than once. Still, I’m always fascinated by what he’ll do next if only because I know I’m aways in for something different and highly original even if, as a Christian, I don’t share his particular brand of depression.

So what kind of movie are we dealing with given its unwieldy title? Truth be told, I’m not fully sure how to explain my thoughts on the movie. Of his entire filmography, this is probably the one that least roots its story in any sort of grounded reality. It’s a surrealist drama from roughly the thirty-minute mark to its cryptic conclusion. This is the kind of movie that’s dripping with small details that inform the greater themes of the whole. It’s almost impossible to interpret on just the first watch since you don’t know where it’s going or what is going to be important in the long run. As such, it’s definitely not a film for everyone. Still, there’s something interesting here.

The movie’s first line is its title and it sets up its story by establishing from the get go that its lead character is contemplating a breakup. The story initially starts quite grounded and somber as we meet our two leads: Jake and the unnamed female protagonist who serves as the film’s narrative and point of view character. The two have been dating for several weeks and Jake proposes taking her to meet his family and check out his home town. She agrees and the two of them drive through a blizzard en route to his parents farm in the middle of the country. 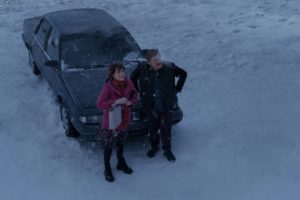 The driving scenes are in many ways the centerpiece of the film. These are the scenes when the characters are talking for long periods of time and internally reflect on their anxieties. You very quickly get the sense that Jake and his girlfriend are a shaky couple as they constantly talk past one another, fail to understand each another, and make one another uncomfortable in subtle ways. Jake is introduced as a nice, sensitive guy but it becomes very clear he carries a lot of resentment towards women and his hometown. At the same time, he’s cripplingly afraid of being alone, failing in his career and being trapped in a place he doesn’t like. The female character is more sure of herself but she’s also less rooted in reality. Her name, identity and personality shift a few times within the film between scenes as though she wasn’t just a single individual person.

You get the sense that time itself in the film is constantly shifting around these characters as they relive different moments of their lives in the past and future, airing their anxieties and ranting about art. The characters’ sense of identity and age seems to shift constantly as well, as if to reflect the characters’ loose grasp of time or the repetitive nature of their lives. At times the film even spoofs the fact that it’s a romantic comedy by contrasting the story with a traditional rom-com movie or a poem, and then having characters from those stories within the movie urgently call the female lead only for them to be ignored. At times, characters even break the fourth wall within the internal logic of the story, alluding that something darker is going on around the edges of the narrative that we don’t see. They encourage the female lead to break the inevitable course of the story briefly before returning to saying all of the things they’re expected to say in front of Jake. 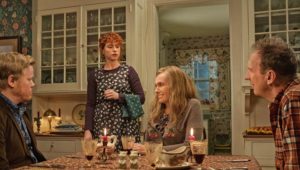 At times the film’s setup seems fit to rapidly transform into a horror movie premise. The first hour of the movie bears more than a little passing resemblance to the setup of Get Out but it quickly becomes clear this isn’t a horror film. The surreal elements are unsettling but it never tries to scare you so much as to keep you from grounding yourself. As the two continue to drive deeper into the night, deeper into the storm and deeper into the country side, the characters are pushed further and further into their worst selves.

Without exactly spoiling what happens… I don’t know how to explain just how the film ends. I can only assume it’s a metaphor for them getting married, declining in their relationship and Jake having a mental breakdown (and possibly committing suicide), but the final scene and shot are the most cryptic and strange in the film. Maybe it’s further spoofing on the artificial and inauthentic nature of the romantic comedy genre or some kind of fever dream but it’s artificiality and the implications surrounding Jake’s survival/identity/future are all things you have to infer by closely following the details of the scenes.

If the movie struggles to make its point clear, the film at least grounds itself in something the audience can understand. The movie is a relationship movie. You understand that from the word go and if you piece the film together thematically I’m sure this all builds into something, even if I can’t fully comprehend what it is without having YourMovieSucks explain it to me over the course of several hours (see: his excellent long-form analysis of Synecdoche, New York). If you already like any of Charlie Kaufman’s films before this I would imagine you’ll find a great deal to like here!

- Some dense abstract imagery and storytelling.

I'm Thinking of Ending Things isn't a movie for everyone. For fans of Charlie Kaufman, the movie is fascinating as his most abstract film to date. While it's a great deal smaller in scale and scope than some of his other movies, it's quite deep and offers a lot to chew on if you're willing to work with the surrealist elements!