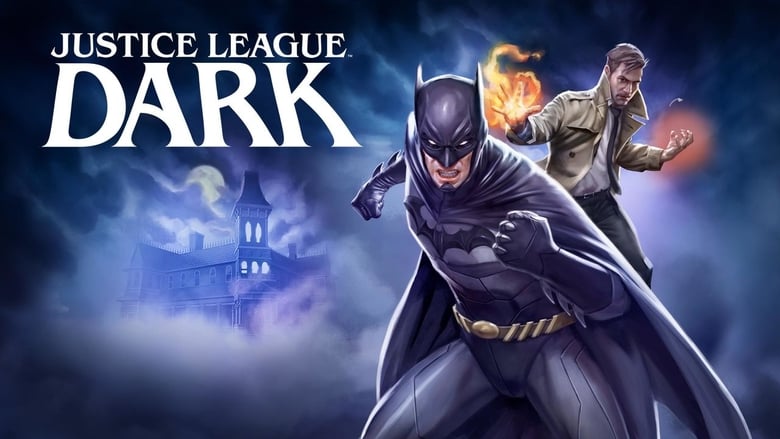 After recently watching Man of Steel, Batman vs. Superman, and Justice League again, I’ve been on a major DC kick. That led me back to playing the Injustice games again and consuming any related content I could get my hands on. Cody, my fellow co-host of the Geeks Under Grace Podcast, also recommended that I watch Justice League Dark: Apokolips War; I knew I couldn’t do that until I watched Justice League Dark. I decided that if I was to continue down this rabbit hole, that I would embrace it and create some content from it.

Justice League Dark is an animated movie that released in 2017, introducing us to the mystical side of the DC Comics world. Being a casual fan of comics as a whole, I knew some of these characters involved, yet I did not have any extensive knowledge of them. This movie included a few familiar faces and introduced me to some new characters that I look forward to reading more about. This movie takes its audience on a tour that is ultimately satisfying if you are interested in the occult themes and lore that it explores. At the same time, other viewers may want to stick to some of the other animated films that DC and Warner Bros. have to offer.

Spiritual Content: The story is centered around dark supernatural themes. Multiple characters in the story use various kinds of magic. Demons are also present during multiple points in the plot. One of the heroes is a man who is bonded to a demon and changes form to do battle. Another character at the beginning of the movie is a Ghost referred to as Dadman, who can possess people. At the beginning of the film, citizens are under an illusion that makes them see their loved ones and other human beings as demons. One of the women who suffer from the illusion is seen with a rosary in her hand and about to throw her baby out of the window.

Violence: This movie is filled with blood, gore, and disturbing imagery. There are explosions and characters are burned. During the previously mentioned beginning scene, a woman tries to run people over, a man attempts to kill his family, and a woman tries to defenestrate her baby. As the baby is rescued, the woman jumps out of the window; her body can be seen on the ground.  Heroes and villains fight one another using a variety of weapons and magical abilities in an attempt to subdue one another.

Sexual Content: One of the ally demon characters is a female that seems to be naked—though no nipples or genitals are showing. Zatanna wears a top that causes her to show cleavage.

Language: Words such as “S**t” and “a**” are present. Minor swear words such as “bastard” and “hell” are also heard in the dialogue.

Drugs/Alcohol: Constantine and Zatanna are seen with mugs of beer, but no drinking is depicted.

Other Notable Content: Early on in the movie, Constantine gambles with a group of demons. 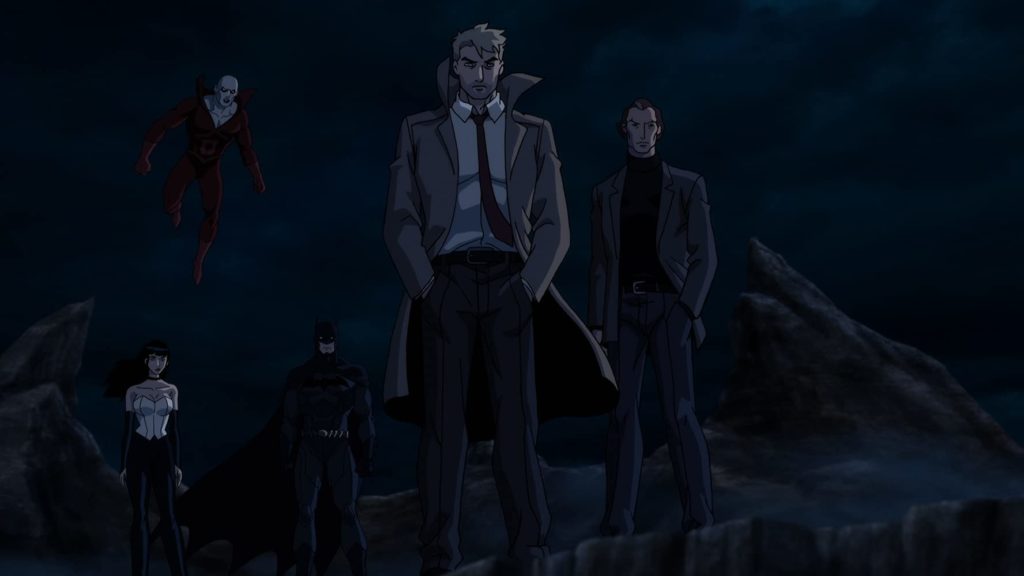 When the film starts, we see the Justice League is dealing with a threat they are unfamiliar with. As the team discusses what to do about the situation, it is decided the best person to call upon is John Constantine, an expert on the occult. The League leaves it up to Batman to track him down, which leads him to recruit a unique team of individuals who can help. This animated movie is based on the comic series of the same name that was started in 2011, and part of the first wave of the New 52 series that revamped the entire DC Universe.

Justice League Dark cleverly sets the stage by showing that our heroes are up to their usual crime-fighting, but encounter an unknown force. With Batman given the task to find help, he is very much a tourist when it comes to the dark world that he must encounter. His interactions with everything that he experiences create some humorous moments, as he continuously reacts as if he’s still trying to debunk the reality of what he is seeing in his mind. One of my favorite moments is when the team encounters a group of reapers, who see Batman and state, “This one has cheated us many times,” as he responds with, “Boo.” 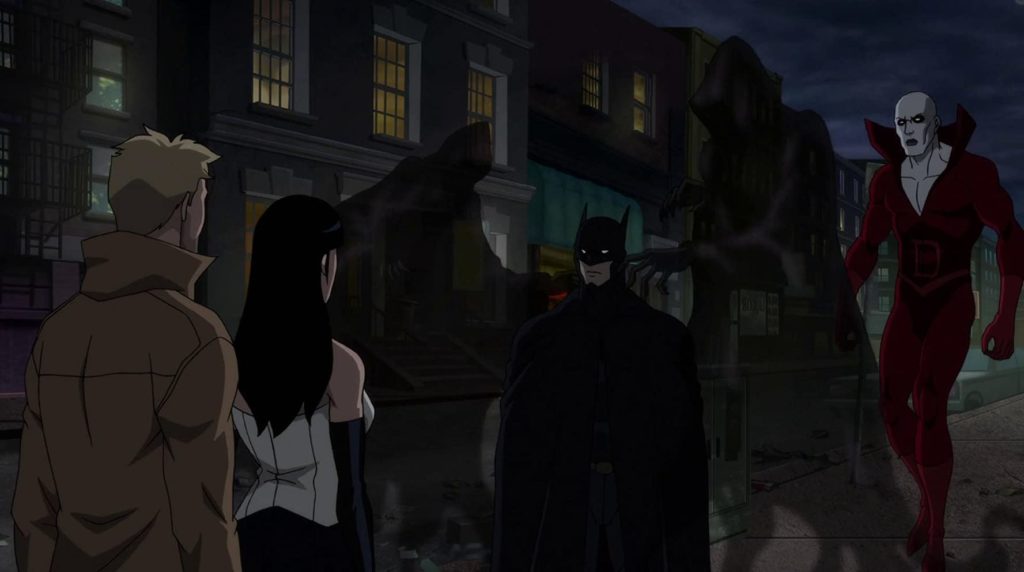 This dark Justice League is made up of Constantine, Zatanna, Deadman, and Etrigan—each gets a moment in the spotlight. We get a backstory for most of the crew, and later get to see each of them in action. Unfortunately, we didn’t get as much time with Zatanna. While she may be the higher profile hero of the group, I don’t know the character well enough, and we didn’t get to see her backstory. Swamp Thing also makes an appearance, who we get even less time with as he only appears in a few scenes. It’s possible that they wanted to introduce less familiar characters such as Deadman and Etrigan, and spent some extra time on them.

Those moments in the spotlight mainly come from the battles that take place in the movie. The fight against Felix Faust especially highlights the skills of each character as it is the first major battle they fight alongside one another. This scene is where Etrigan caught my eye in particular, but where we see Zatanna get to unleash some raw power. This battle was crafted to show the audience these characters are not messing around and that they’ll get the job done at any cost. It’s where the movie begins to go full steam ahead until the end. 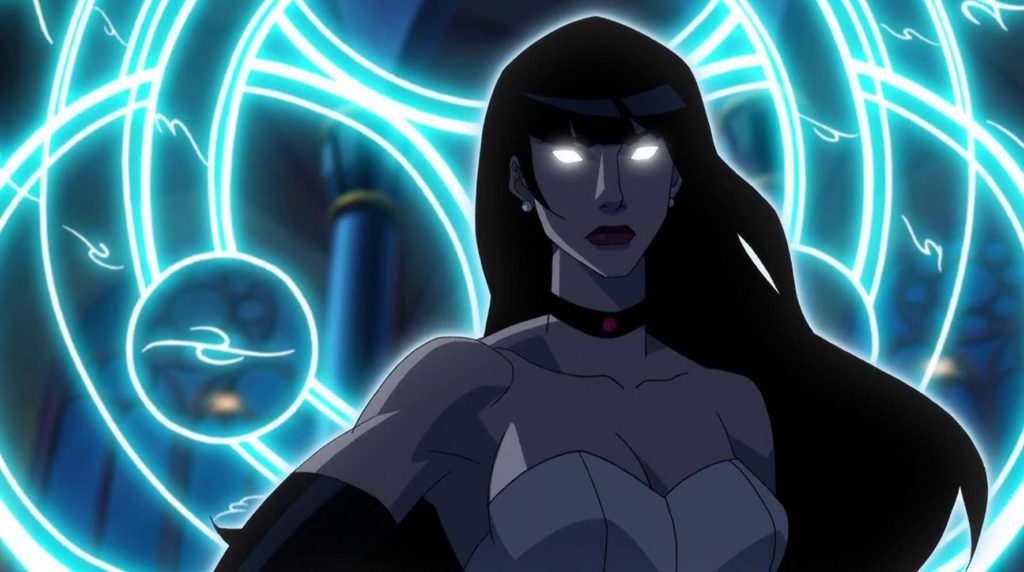 When it comes to pacing, I’ll admit that I had to rewind a few parts as my brain began to tune out early in the movie. I believe this is primarily due to the build-up and unraveling of the mystery feeling a little slow in the first half of the film. The plot itself is also relatively simple to follow, but needed to be for the short 75-minute runtime. These animated films from DC typically have a slightly shorter length, which sometimes holds these stories back. However, Justice League Dark benefitted from it as the significant shift in pace occurred before I got too bored.

With Batman Ninja and a few others being unique exceptions, the animation in these DC animated movies hasn’t changed much. Justice League Dark doesn’t look any different from the films that have come before it and even after. I wish that Warner Brothers animation would be more adventurous and give more of their movies some different style and personality. I get that a number of these films are connected via the New 52 theme, but that does not mean they all need to look the same. Most of these films don’t look far off from the DC cartoons we were watching many years ago, so it’s time for something new. 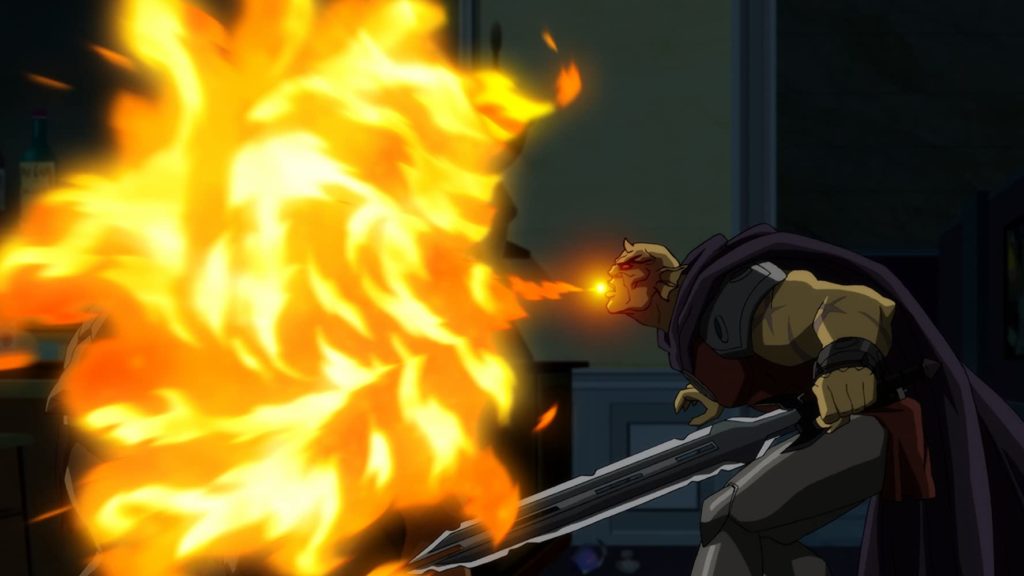 Etrigan became a new favorite of mine thanks to this movie.

Lastly, those who are not comfortable with occult themes may want to skip this movie. There are many references to Hell and demons, while nearly every character delves into the dark arts in some way.  My advice is not to watch it if you feel that it is going to collide with your faith. Some might be in a different place with their spiritual growth and comfortable with watching it, and that is perfectly fine too. As we encourage our audience to use discernment in all content that is consumed, I especially encourage you to do so with films such as this one.

Justice League Dark is a well-crafted guided tour into the mystical side of the DC universe. We are also introduced to an interesting group of characters that know how to take on certain evils that the Justice League can’t. Even with its flaws, this is still a fun adventure that is worth watching if you are prepared to dive into some content with mystical themes. From what I have heard, this movie is only the beginning compared to what Justice League Dark: Apokilips War has in store—and I’m ready for it.

Justice League Dark successfully introduces us to the mystical side of the world that DC Comics has built, though I would've liked a little more light to shine on a few of these dark heroes.