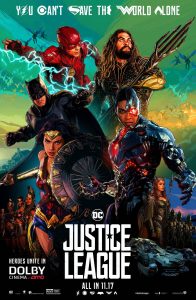 Let me be clear:

I love superheroes. Pretty much always have. So when I find them not given the proper treatment I think they are due, I’m wounded. What’s worse is when the treatment is qualitatively curtailed by both avoidable and tangentially unavoidable circumstances. Desperately trying to work against the cataclysmic failure of its predecessor, shuffling to keep up with the Jones’ of the Marvel hype train by walking a mile in only two steps, and also trying to be a respectable achievement in its own right, Justice League has more riding on it than a Bangladeshi bus ride. Couple that with the shaky production history mired with undesirable delays–reaching its peak in director Zack Snyder suffering a particularly horrible family tragedy earlier this year, subsequently stepping down from the production and Joss Whedon taking the helm in his place with ambitions of reshoots and restructurings to the plot–it would be a miracle for this movie to just be watchable. It’s kind of sad when you think about it…

Violence/Scary Images: Lots of large-scale superhero-movie violence: huge explosions, widespread destruction, battle sequences. There’s no gore (with the exception of certain creatures’ gooey green blood), but a giant monster tosses even the superheroes around like they weigh nothing, kills foes, and destroys buildings. A resurrected character angrily fights with and injures Batman. A family is armed but can’t fight the creatures; they nearly die but are saved at the final moment. Tons of weapons (swords, guns, hammer, trident, lasso, shields, etc.) and hand-to-hand fighting.

Language/Crude Humor: A few smatterings of profanity. No “f-bombs.”

Drug/Alcohol Use: Adults drink in pubs and alone. Aquaman downs a bottle of liquor and then throws it into the sea. Bruce and Diana have a drink together.

Positive Content: The movie’s biggest message is about the importance of team building and working with others for the greater good. Each of the superheroes alone couldn’t defeat the enemy, but together, they’re much stronger. This film also shows how a team’s (or neighborhood’s or society’s) different strengths and abilities are what makes it powerful. 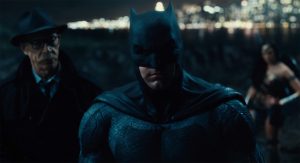 Zack Synder’s Justice League opens with recorded footage from a mobile device of Henry Cavill’s Superman turning away from a public authority figure to give an impromptu interview to a small group of children who are so elated to talk to him for their school project that they’re almost at a loss for words. Superman smiles through it all while answering all their questions with quiet joy and satisfaction until they ask “What’s the best thing about being on Earth?” At this point, Superman is himself at a loss for words as he smiles pensively and drops his head.

This is the approach that movies about Superman should take. Yes, let there be high stakes, life-or-death situations, terrifying villains, and even grievances. But in the midst of it all, let there be the unbreakable beacon of hope that is the Last Son of Krypton–the beacon that all other characters are constantly making him out to be. Unfortunately, due to some critical errors in both conceptualization and execution in the DC Extended Universe (DCEU), it may be some time before we get that beacon of hope in his full capacity. For now? Eh, could be worse. 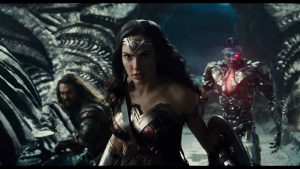 Coming off the heels of the virulent dump fire that was Batman v Superman: Dawn of Justice, Justice League finds itself with far too much to do and far too little time to do it (Warner Bros. put out an ordinance declaring that none of their theatrical releases were allowed to be longer than 120 minutes. Expect an extended version/director’s cut soon.) What’s on the itinerary? We gotta get Wonder Woman (the effervescent Gal Gadot more underwritten this time around) back to Batman (Ben Affleck) to begin a campaign in recruiting certain new key players to ward off the impending threat of Loki–uh, I mean Steppenwolf (Ciarán Hinds in mo-cap). Steppenwolf plans to use the Tesseract…forgive me, the Mother Box (at least there’s three of them this time. That’s different) to re-engineer the world for the coming of Thanos…excuse me, Darkseid.

If you’re familiar with what was being referenced in that little charade, dear reader, then you know how this is going to play out. What you should also know is that it’s not going to play out very smoothly. As should be obvious to all, the DCEU is a project that is absent-mindedly rushing to get to where Marvel is without actually earning its keep. Here, at least three major characters are brought into play without any prior introduction or development, so while The Avengers could actually dazzle us with a cavalcade of awesomeness by bringing together characters that they had properly defined and introduced us to over the course of a few outings, Justice League tries to do the same without doing its homework.

Granted, these characters COULD be incredibly winsome if they were given the chance to do so, but maybe with this $300 mil kickoff out of the way, now we can actually take time to make these mere stage performers into our friends. Even the villain here is more of a blindly destructive force of nature than a well-developed character. 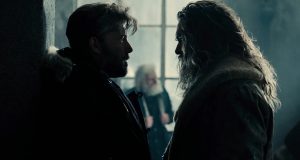 Sure, the movie does what it can to have us empathize with the new players with what little resources it can muster. The Flash (a thoroughly entertaining Ezra Miller) is morbidly anti-social and seemingly more detached from the idea of social interaction than even Batman is–albeit in a more comical fashion. Fans of the CW program will probably feel cheated with what little time is given to his relationship with his estranged father, but stay focused, okay?

Aquaman (a charming but underused Jason Momoa) is killing time doing charity work for a disadvantaged fishing town by bringing home the bacon in a rather unorthodox fashion. There’s also a moment in which he returns to Atlantis, so hopefully, that will be fleshed-out in his solo film. Cyborg (an impressive Ray Fisher) is anti-social to about the same degree that the Flash is but for more grim reasons. In all honesty, I’m quite interested to see how his solo film will build upon his multi-layered resentment.

With all this potential for greatness overflowing in Justice League, it all leaves me a bit hollow for one major reason. I’ve been saying for many years that the effectiveness of a narrative work is severely truncated when it is made out of obligation rather than inspiration.  Genuine inspiration is something that cannot be forced, manufactured, or compelled to adhere to the demands of charts and statistics. With Justice League, I see far too many choices that were made because Warner Bros. HAS to make them. So much of what goes on here is done as perfunctory filler rather than in genuine service to any heart or ethos to the film. Believe me, there isn’t any. 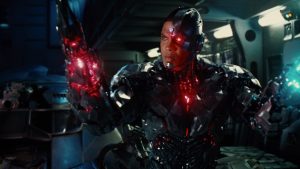 In fact, that same mechanical approach is most likely the reason why the whole pacing of the film is so choppy and inconsistent. I honestly believe that Snyder is an incredibly gifted filmmaker with a real eye for cinematic aestheticism. The major issue is that he’s incredible at directing MOMENTS, but not SCENES. Justice League is a 2-hour long sequence of some very impressive moments with little in the way of tangible cohesion between them. Couple that with the broken editing and surprisingly cheap-looking production (especially early on), and we have a film that might be better suited as a bunch of GIFs posted on a Tumblr blog rather than a theatrical release.

That’s heartbreaking to have to say about a movie featuring some of the most iconic and widely known characters in all of fiction. If nothing else, Justice League served as a healthy reminder that the quality of a work is not determined by what’s being worked with, but how it is used. Halfway through the film, a major character is introduced in a way that reminded me of The Vision’s introduction in Marvel’s Avengers: Age of Ultron. I recall that when The Vision made his appearance, there was light but widespread applause in the theater I was in. Here when the major character is introduced in a similar fashion, there was one quick and timid golf clap with a smattering of awkward laughter as a response. Once you know what character and scene I’m referring to, dear reader, you may find that nearly impossible to believe. I can’t blame you. 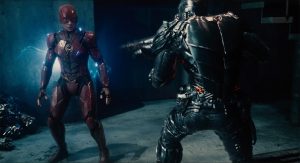 There are some notes of praise to give here. The overall tone of the film is a lot more lighthearted and comical than the apocalyptic and funereal tone of Dawn of Justice. It’s somewhere between that and Thor: Ragnarok. The humor is solid, the dialogue is snappy, and I found myself enjoying the characters’ company. It’s quite clear that there was a bifurcated handling at work here. Since Snyder stepped down from the production (due to suffering an incredibly grievous loss in his family) and was succeeded by Joss Whedon (the same guy who, ironically, wrote and directed the two Avengers movies for Marvel), it’s clear that some opportunities were taken to spice up the characters’ squabbles and dialogue in a way that only Whedon could do.

I was also quite intrigued by the focus on a single Russian family that was constantly under threat by Steppenwolf’s minions. Of all people, it was Stalin who said that one death is a tragedy, but a million deaths is a statistic. No matter how functionally unsound it may seem to see only one family in what seems to be a functional village, the precision in focus on a singular entity of humanity made the threat more immediate and palpable than it would have been otherwise.

Currently, Justice League 2 has neither a release date nor production crew. That’s a good thing, in all honesty. Now we can take time to actually acquaint ourselves with these characters who have just put on such a show for us. There’s a world of difference between a performer on a stage and a character that we get to empathize with in their personal struggles. Now that the show is over, let’s go out for a bite, shall we? Shawarma sound good?

The DCEU is still crawling while wounded by past failures to a respectable point in its run. I’m desperately hoping they get there sooner rather than later. There’s too much talent here to go to waste.