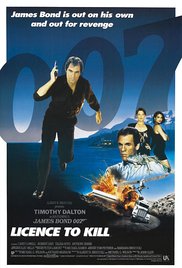 We turn to another Bond movie that contains revenge: this time Timothy Dalton as Bond in Licence to Kill, a sober version of Bond in a grounded world and story. Grounded by Bond standards that is – there’s only one shark attack. Though it was a commercial failure and stalled the Bond franchise for years, this is often considered one of the best Bond movies.

Violence/Scary Images: People are killed in a variety of violent and inventive ways. A man is put through a crusher; another is exploded in a decompression tank.

Spiritual Content: A fake televangelist who takes advantage of his position is depicted.

Sexual Content: Characters are shown naked from behind. Sex is frequently implied.

Other Negative Content: Personal revenge is shown as a good and necessary response to violence.

Positive Content: A strong friendship between a married couple and a friend is shown.

Licence to Kill is a straightforward revenge movie. Drug kingpin Franz Sanchez mutilates Bond’s friend Felix Leiter and kills Leiter’s wife. So of course, 007 defies orders to seek revenge on Sanchez. He gets revenge. Movie over.

This movie uses that basic plot as the shortbread pastry upon which it builds an action movie cheesecake that includes sharks, gunfights, underwater chase scenes, a drug lab inside a meditation retreat inside an Aztec temple, women being interested in James Bond for poorly defined reasons, and a high-speed chase in tanker trucks.

Like most cheesecakes, Licence to Kill is just a little too much – too long to be breezy and light, not complex or rich enough to be a star dessert. But perfect as a shameless pleasure on a rainy day, or shared with a friend. Any movie where I can say that the narcotic detective ninjas were underused has its own kind of glory.

The movie’s straightforward nature extends to Bond’s revenge. He wants to avenge Felix and his wife so he does. No doubts are raised about the justice or propriety of his revenge – only about how he will achieve it. This gives the movie a brutal and unapologetic tone. Like a medieval duel or a CIA-orchestrated coup. And this tone carries over even when Bond is doing deeply silly things like tilting a semi-trailer to one side to dodge a missile.

This serious tone is achieved by the slow and steady opening, where Leiter and Bond arrest Sanchez together. This gives us a strong sense of the friendship between Bond and the Leiters, and Sanchez’s escape from custody and brutal treatment of the Leiters shows him to be not just evil but effective. Revenge is about loss; an effective revenge movie must give the audience a sense of what is lost. Licence to Kill does this by taking its time.

The whole movie is slightly slower and more intricate than you might expect. Bond has a straightforward plan to kill Sanchez but it is interrupted by Hong Kong narcotics detectives (who are ninjas, because of course). This begins a chain of improvisation that takes Bond to the heart of Sanchez’s operation, to kill him and accidentally prevent a massive expansion of drug production.

It’s all a matter of loyalty. Loyalty to the Leiters is what drives Bond towards revenge, as he reveals to Sanchez just before killing him. The elimination of a major narcotics cartel is just collateral damage. And Sanchez prizes loyalty above all else. Bond infiltrates Sanchez’s operation by using the kingpin’s fear of betrayal.

Evil is both an effect and a cause of self-absorption. Sanchez is so focused on the possible weak loyalty of his underlings that he doesn’t consider a strong loyalty that has nothing to do with him – a personal bond that drives 007 to disobey procedures, laws, and orders. Another example of how action movies are a thoroughly Romantic genre. What is personal and emotional is good, and what is abstract and legal is bad (or at best inconvenient). When will the bureaucracy have a hero of their own?

The romantic side of Bond’s character is not so well-served. Both love interests could have interesting dynamics with him – a tough smuggler pilot (Lowell) and Sanchez’s girlfriend who wants to be free of this life (Soto) – but writing and delivery give these women’s relationship with Bond the sizzle of a lukewarm pizza.

The movie has plenty to distract from its weak points. Q (Llewellyn) appears in one of his largest roles to provide comedic relief and there are too many good action scenes to list. Keep an eye out for a young Benicio del Toro as a random henchman. But if you have any sense of what the Bond franchise does, nothing in this movie will surprise or thrill you. Watch it if you like competent action movies and you can stomach a tinge of sexism. Otherwise, skip it.

If you can stand Bond movies, this is a pretty good one. It will not change your mind about the franchise and it doesn't offer anything particularly compelling on its own.