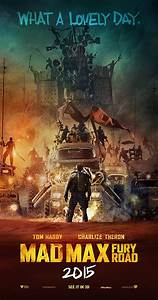 Nobody believed when George Miller released his fourth Mad Max movie in 2015 that he was going to be delivering to Hollywood one of the greatest contemporary action films of the decade. To everyone’s shock, the film turned out a masterpiece!

Sexual Content: Scantily clad women are depicted throughout the film.

Spiritual Content: Characters worship their leader as a God and believe they will ascend to Valhalla in his service.

Other Negative Content: Significant violence and implications of sexual violence.

Movies are miracles. As someone who’s made his fair share of terrible student films, I can tell you it’s a miracle when a movie comes out that is merely good. Films are a convergence of elements that all have to work in tandem in order to function. Thus when a movie defies the very odds of its existence and thrives, it’s something to be more than celebrated. That’s why so many filmmakers hold up something like Mad Max: Fury Road as a modern masterpiece. When great filmmakers like Tarantino and Soderbergh are in awe watching it, you know you’ve made something miraculous.

Mad Max: Fury Road is without reservation the best contemporary Hollywood blockbuster to come out in the past decade. While I’m somewhat hesitant to call it the best film of the past decade, period, I am inclined to say it stands in the category of all time great genre films and easily gets to stand among the strongest auteur works of the 20th century like There Will Be Blood, No Country for Old Men, and Lord of the Rings. 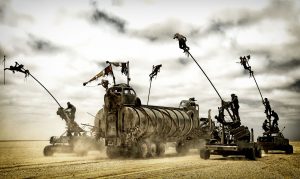 The then 70-year-old director George Miller had wanted to shoot the film for decades as a late-in-life passion project since he hadn’t touched the Mad Max series since the bloated third film in 1985. Since then, his films scaled back their style and content to mostly focus on humanistic dramas like Lorenzo’s Oil, and kids’ films like Babe: Pig in the City and the surprisingly atheistic Happy Feet films. Miller had been trying to produce the film since the late 1990’s and ran into stumbling blocks on multiple occasions. Nobody expected in 2014 that the director’s in-development passion project was going to amount to anything more than an over-produced box office flop.

The movie dropped like a rock on May of 2015 while society as a whole was still processing Avengers: Age of Ultron. I didn’t even see it opening weekend until I’d heard from most everyone I trusted that it was something everyone needed to check out. Mad Max: Fury Road is a sustained high. It’s persistently energetic and exciting from start to finish and attains what George Miller had wanted to accomplish with it. Ever since Mad Max 2: The Road Warrior, Miller has wanted to make a movie that was nothing but one unrelenting action scene. In that, he succeeded beyond his wildest dreams. The film won 10 Oscar nominations (losing Best Picture to Spotlight), earned $374 million at the box office, and was universally held up as one of the best films of 2015. 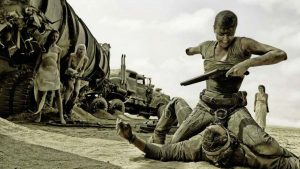 What makes something like Mad Max: Fury Road work, though? After five years, what makes the film feel so fresh and exciting?

The answer is propulsion. The movie strikes a high note almost immediately within the opening action scenes at it slowly undoes its yearn of story and world building in the background of action scenes. We meet characters as they dart in and out of action scenes and their motivations are swiftly put into perspective. We meet the titular Max as a feral survivalist who has gone insane after decades of wandering the post-apocalyptic wasteland who is abruptly captured by a tyrannical warlord named Immortan Joe. Joe is a cruel, dictatorial patriarch who maintains a crushing grip on a small enclave in the wasteland due to his access to a limitless supply of water which he parses out to the people in small doses. When his “Breeders” have decided they’d had enough life under his rule, they conscript Joe’s most respected Lieutenant, Furiosa, to help them daringly escape across the wasteland to a rumored paradise ruled entirely by female warriors.

There’s a lot going on thematically with this setup. Immortan Joe’s domineering and brutal rule over the wasteland, his resource hogging, and control over the women under his rule set him up as a symbol of everything perceivably wrong about society from Miller’s perspective. He’s the patriarchy, the wealthy 1%, a hierarchical tyrant, and maybe even a God, all in one person; thus the women’s desire to flee to a possible paradise in the far distance, away from his control. Joe has an army of thousands of “war boys” who worship him in the likeness of a Norse God. The only chance Furiosa, Max, and the women have is to viscerally put their interests aside long enough to keep Joe’s pursuers at bay until they can put enough distance between them to escape the long arm of his grasp. Only through egalitarianism and self sacrifice can the forces that oppress society be escaped and possibly uprooted. 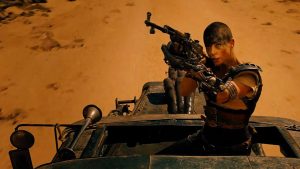 Interestingly enough, the film was story-boarded without a script initially so George could focus on the visual storytelling aspect of the film first and then built the film’s story around that vision. You can see the effect it has on the flow and structure of the film. The movie has the same push and pull of a Buster Keaton silent film as Furiosa, Max, and her allies are forced to shove off consistent threats at high speed. Each scene is an individual problem they have to overcome one at at a time while still maintaining their distance from their pursuers.

Focusing on the visual storytelling first paid off. Visually speaking, the film is a masterpiece. The movie’s shot composition is immaculate and its color grading manages to make desolate wastelands of sand look lush, warm, and jaw-droppingly beautiful. You could write an entire book about the way the film’s shot composition builds its visual language and many film critics have. There’s a lot to be said. It’s all immaculately framed so the eye is drawn exactly where the viewer needs to look to grasp the information of the shot. From a cinematography perspective, it’s film making 101, but for a film to maintain its focus for this long is insane.

A film like this shouldn’t work. It should’ve been a bloated and unwatchable mess. It should’ve stayed in development hell for another decade. Films this troubled rarely turn out as merely good films. Against all odds, it turned out a miracle. After nearly five years since its premiere, Mad Max: Fury Road remains fresh and exciting from start to finish. While its rumored sequels have largely floundered under the weight of a series of lawsuits between Miller and Warner Brothers, the film stands alone as a perfect action movie.