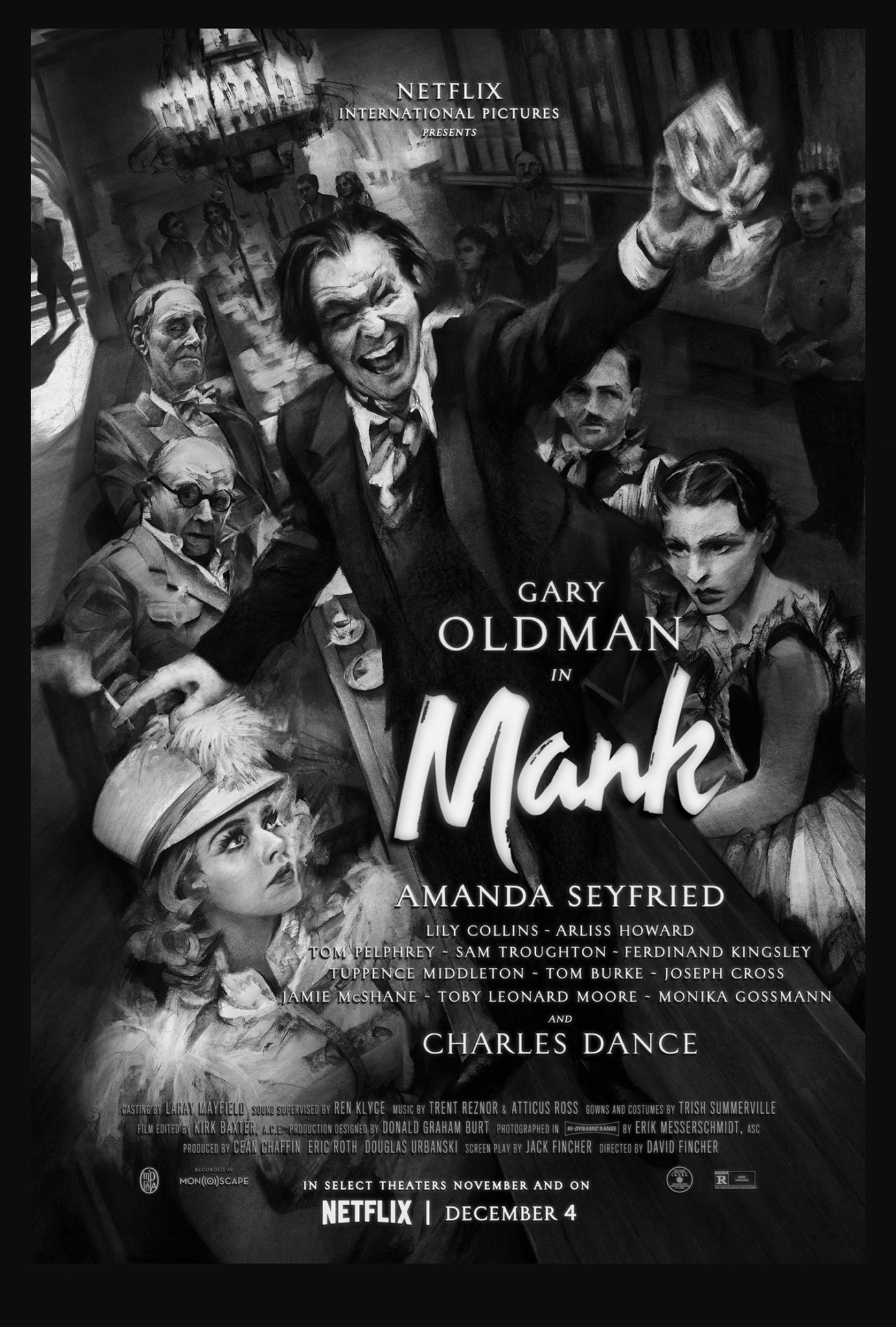 David Fincher hasn’t directed a theatrical release since his 2014 mystery thriller, Gone Girl. Since then, he’s been preoccupied working on the two seasons of Netflix’s popular series Mind Hunter. Following its premature cancellation, Fincher moved on to direct his first film in more than half a decade. Based on a script from his father, Jack Fincher, he’s returned with a new drama for Netflix based on the life of the screenwriter for Citizen Kane!

Violence/Scary Images: A car crash happens offscreen—we see a man pulled out of the crash. A man violently pukes on screen. A man commits suicide offscreen.
Language/Crude Humor: Some coarse language and references to sexuality.
Drug/Alcohol References: Characters drink and smoke heavily throughout. Alcoholism is a prevalent theme.
Sexual Content: A man’s wife undresses her drunk husband but nothing is shown. A person describes how a man named his wife’s private parts with a nickname.
Spiritual Content: None.
Other Negative Content: Themes of corruption, addiction, suicide, self-destruction and betrayal.
Positive Content: Themes of justice, honor, idealism and telling the truth. 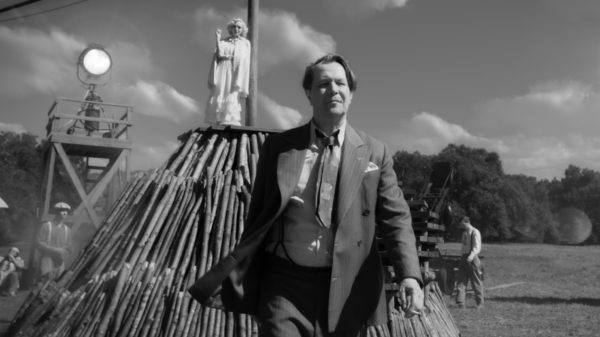 Mank can’t help but feel a bit gimmicky. Even just at a glance, the movie wears its influences on its sleeve a little bit too clearly. Then again, if you’re going to try to imitate a classic you might as well go big or go home.

Mank is coming on the wings of Hollywood’s recent resurgence of interest in Orson Welles. His long-forgotten films like Chimes at Midnight and The Other Side of the Wind finally received wide releases in the past half-decade, and documentaries about Welles like Magician, They’ll Love Me When I’m Dead and Hopper/Welles have been getting a lot of attention of late.

As such, Mank can’t help but feel a little subversive. Mank is a film about the creation of Welles’ most famous masterpiece, Citizen Kane, but it’s primarily interested in exploring the biography of a different individual involved in the film’s history: screenwriter Herman Mankiewicz. Welles does show up several times in the film and he is a key character in the story’s setup, but Mank is more interested in exploring the parts of the story that don’t directly involve Welles.

The film comes to us from Hollywood darling David Fincher (Gone Girl, Zodiac, Se7en) who is fresh off his recent Netflix collaboration, Mindhunter. The script for this film was actually conceived by his father, Jack Fincher, based partially on Pauline Kael’s infamous work of polemical film criticism, Raising Kane.

Kael was a famous bomb thrower and tried to use Orson Welles as an example to prove her theory that the auteur theory (that being the director ought to be seen as the singular creative voice on a film project) was wrong-headed. As such, she blasted Welles in a massive essay for The New Yorker and claimed his screenwriting partner, Herman Mankiewicz, was actually the genius responsible for Citizen Kane‘s literary feats. The essay has since been widely discredited.

That’s not to say that Herman Mankiewicz was irrelevant to the process. As Mank makes clear, he was actually an essential voice in creating Citizen Kane. Many of the script’s best moments clearly poured out of his very specific perspective and ideas. That said, the 300-page script—tentatively titled American—Herman turned in to Welles wasn’t filmable. It took Welles’ impressive ability to condense complex materials into their essential aspects to create the 120-page script that was ultimately filmed. 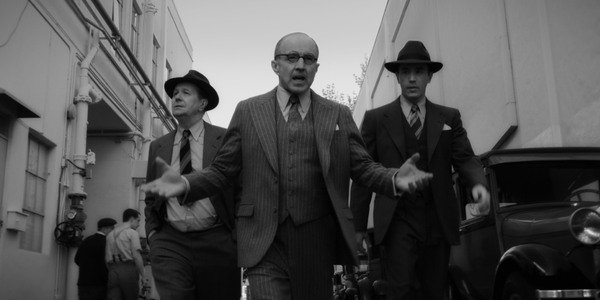 I feel compelled to front-load this review with a great deal of information because I have no earthly clue how someone who isn’t already invested in the mystique of Orson Welles and his complex personal history will interpret this biography. I certainly don’t know how someone will perceive it if you haven’t seen Citizen Kane. The movie echoes the themes and ideas of that film in its structure, cinematography, and themes so completely that the homage would probably feel hollow without that knowledge.

Then again, David Fincher is a legitimately talented filmmaker so maybe someone going into this blind would like it. I’d be interested to hear from someone who actually tried that.

Regardless, Mank’s structure borrows the jumbled timeline of its progenitor to craft a story that functions as a series of snippets into the biography of its key figure. Herman was a complicated fellow in real life. He was an extreme alcoholic with gambling issues and an infamously self-destructive personality. He doesn’t seem to have been afraid to speak his mind even when doing so was dangerous. He was also a deeply contentious idealist who spoke out against the treatment of his fellow German Jews during the rise of Hitler.

Mank balances the complex personality of its subject to double as a biography of the man and an exploration of how his life experiences and relationships wound up in the script for Citizen Kane. It splits the bulk of its plot intercutting between two timelines.

In 1934, we meet Herman as he’s working as a writer at MGM and struggling to fit in among his mostly Republican coworkers in Hollywood as a political progressive who sympathized with the likes of Upton Sinclair. This part of the timeline serves to introduce most of his relationships to people in Hollywood, his relationship to the media mogul William Randolph Hearst, and his floundering screenwriting career.

In 1938, we follow Herman being hired by Welles to write a treatment for a possible political drama while Welles is busy working on his infamously doomed adaptation of Joseph Conrad’s Heart of Darkness. At this point, Herman is a washed-up, barely functional alcoholic who could only function by being shipped off to a house in the middle of the Mojave desert where he could dry out and focus on the screenplay for two months while laid up with a broken leg. 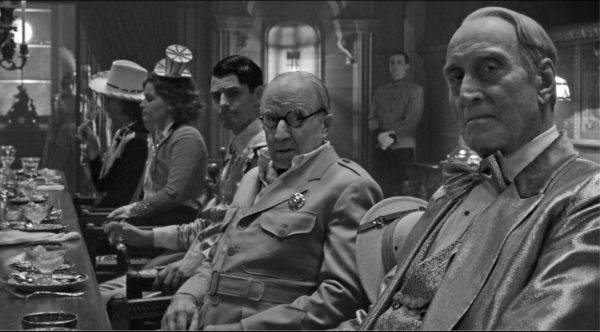 Bouncing between these two timelines allows to film to comment on itself by highlighting moments that emphasize the nature of these characters’ relationships. Citizen Kane would famously become known as an overt critique of the corrupt practices of William Randolph Hearst’s tabloid empire. Mank‘s purpose in setting this up is to explore why exactly Herman was so determined to satirize his former friend.

As becomes clear, it’s a combination of Herman’s hubris and idealism. Herman just couldn’t seem to help but to undercut himself at every turn by taking dangerous bets, indulging his vices, and burning his bridges. He honestly does care about human rights and usurping political corruption but he just doesn’t seem to have the ability to control himself. Some of the personal details he weaves into his script are underhanded slaps at his immediate friends and colleagues that couldn’t possibly read as anything but venom spitting.

As interesting as this character study ends up being, it’s hard to think of the film as something that isn’t a compromised act of hubris itself. Despite toning down some of the overt anti-Welles stances of Raising Kane, Mank feels like an act of self-sabotage. It’s homaging a film that the script declares to have been a false start for the great Orson Welles. It doesn’t do enough to offer Welles’ perspective on the script. You can tell where the script’s heart belongs despite how much Fincher clearly loves Welles and the film in question. 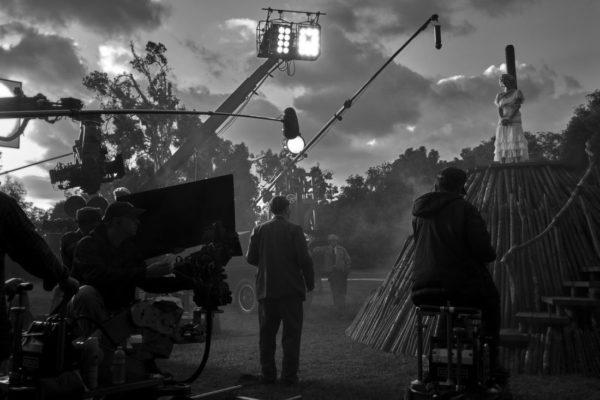 The compromised nature of the script bleeds into other elements as well. I’d heard some critics talk about how dark the high contrast lighting is in some of the scenes and they weren’t kidding. Almost all of the 1938 scenes blur the faces of the characters to the point where it’s impossible to see their expressions. Fincher’s formalism and talent as a visual storyteller are thankfully on full display so the transitions and individual shots are lovingly crafted in spite of the lighting mistakes.

The whole project reeks of misplaced effort. Any talented Welles historian could poke a hole through half of the film’s plot points and point out the ways it gets tiny details wrong. I certainly don’t hate Mank of course. It’s an intelligent and introspective drama from start to finish. You’ll know going into Mank if it’s a film whose subject matter interests you based on all of the history necessary to understand the nuances of his portrayal. Sadly, I’m not sure the film totally works out those nuances. The film just doesn’t seem to know whose side it’s on because Jack and David Fincher clearly don’t see eye to eye on the issue of Citizen Kane‘s authorship.

More to the point, what’s the point of relitigating the already disparaged arguments of Raising Kane sixty years after they were debunked in a Netflix drama?

Mank is a film you'll like if you understand the references it's making to history and classical film. I'm not sure what you'd get out of it if you don't already like Citizen Kane. That said, fans of the classic film will find an interesting and nuanced drama that engages from start to finish!