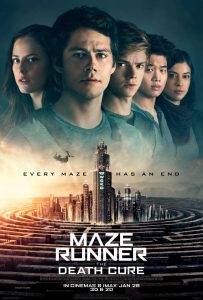 Writers: T.S. Nowlin, Based on the novel by James Dashner

After a long delay due to Dylan O’Brien’s injury, the final film of the Maze Runner trilogy is finally here! What with the massive plot divergences from the original novel in the Scorch Trials (Our Review Here! Also check out our review of the first film.), as a Maze Runner fan since high school I was a bit wary of changes made in the Death Cure, but I’m happy to say that I actually welcomed many of them.

Violence/Scary Images: The content is far less disturbing than in the Scorch Trials. Cranks (zombie-like people infected by a disease called the Flare) are still included but are much less of a focal point. There are a few jumpscares of cranks being pressed up against the window of a car. A middle school-aged child and a teenage boy turn into Kranks. A character is ripped apart by Kranks but this is only implied in a short chaotic shot. A character who fans will know as “No-Nose” is included in this film and as his nickname suggests he has no nose and also oozing veins going up the side of his face which can be a little unsettling.

Characters are shot with guns and turrets, characters are also blown up and burned to death. One character gets a severe gunshot wound to the stomach which is shown up close and another one is stabbed in the chest. Some mental torture of a character.

Drug/Alcohol Reference: A character drinks brandy to the point of feeling slightly buzzed.

Other Negative Content: As expected out of villains, they can be heartless and they disrespect the sanctity of life.

Positive Content: The main themes of the film are never giving up on your friends and remembering those we’ve lost without regret. Thomas will stop at nothing to find Minho no matter what it takes and while another one of his friends is turning into a crank he never gives up on him/her (No spoilers). He loves his friends unconditionally and there’s no limit to what he would do for them. Brenda also shows this when no matter what she never gives up on Thomas. She refuses to leave him behind.

Across the movies, Thomas has lost so many people he’s loved and those deaths weigh heavily on him. During the film, he has to learn to think of the happiness he had with those people instead of all of the regret he has surrounding them.

The Scorch Trials was so different than the book that I knew I had to go to the theater for the Death Cure with an open mind or I wouldn’t enjoy it at all. From the opening scene, it was starkly different from Thomas waking up being captured by WCKD like in the novel. However, the film didn’t completely diverge from the books and some of the changes actually helped the story.

For example, in the novel, the rebel leader Vince actually turned villain in the end, but in the movie, he doesn’t. This was a refreshing change because having the rebels actually just be as evil as the villains is a trope used too many times. At the time the book was written it wasn’t, but now it has become so. Another example is one certain characters’ death that seemed like a cop-out in the books was far more emotional and justified in the film. Fans, you know what I’m talking about. There’s also many other events from the book put into the film and the tone of the series is kept, so it isn’t completely diverging from its base.

Dylan O’Brien did a terrific job as Thomas. He’s brave, daring, and loyal. I enjoyed his performance and his character. Kaya Scoledario did a great job with the complex character Theresa. I’m glad the film had several scenes devoted to her. These made her reasons for what she did to Thomas and his friends make sense and you understand from her point of view why she did what she did. Aiden Gillen made for a menacing and sinister villain as Janson, yet not one dimensional. He was complex but formidable.

Rosa Salazar got a chance in this film to really flesh out her character Brenda. I loved the father-daughter relationship between her character and Giancarlo Esposito’s character Jorge. But the best acting of the film has to go to Ki Hong Lee (Minho) and Thomas Brodie-Sangster (Newt). Their performances gave me chills and brought me to tears.

One of my favorite parts of this film were the sets. I love how they seemed so natural and really captured the post-apocalyptic feel. There were so many details such as trash being left on the street, stripped abandoned cars, and cluttered shelves that made me feel that I was truly peeking into this world ravaged by the Flare. The score really carried the emotional weight of the film as well. Some argue that having too much of a score controls too much of how the audience is supposed to feel. I politely disagree. The score adds to the emotion given off by the actors and strengthens their delivery. John Paesano does it again.

The only few things that make gripe were some time jumps. Sometimes it felt like I didn’t know how much time passed or it seemed like too much time passed like when a new settlement had new crops or the characters abruptly changed clothes. Also, some of the WCKD people had almost Stormtrooper bad aim. But these still didn’t stop me from enjoying the film as a whole.

With the history I have with the series, I really had to think of the Death Cure as an alternate universe from the book. It was a stretch for me, but overall I enjoyed this film and I plan on seeing it again. Also, James Dashner’s cameo almost had me laughing out loud and clapping in the theater. It was great to see him on the big screen!

Though The Death Cure isn't as loyal to the books as fans would like, I believe it even have improvements from the original plot and is a satisfying conclusion to the Maze Runner series.