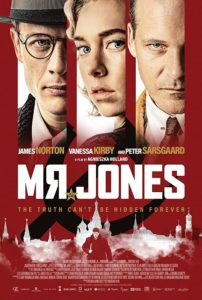 Polish director Agnieszka Holland is most famous for her 1990 film, Europa Europa, but her career has been long and successful. Her newest film, a Polish-English production, Mr. Jones, was released in Poland in October of last year but has slowly made its way through international cinemas. It was scheduled for an April release in theaters before COVID-19 canceled its premiere. With the film just recently dropping on Video-on-Demand, Americans are finally getting a chance to watch it. While some have criticized its middling filmmaking, others have praised its depiction of one of the 20th century’s most underreported human rights atrocities.

Violence/Scary Images: Scenes of dead bodies and screaming people. A man is chased by soldiers with guns and fired upon. A man is kidnapped. PG-13 level gore and violence.
Language/Crude Humor: Moderate language.
Drug/Alcohol References: Frequent drinking and smoking. Brief drug use.
Sexual Content: Full female nudity at a scene during a party, and partial male nudity.
Spiritual Content: None.
Other Negative Content: Themes of hopelessness and a lack of justice.
Positive Content: Themes of justice, hope and truth in the face of totalitarianism. 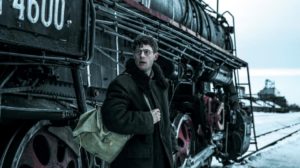 There has been a minor renaissance of anti-Soviet films and TV shows in the past few years. It’s nothing major but it seems that there’s a greater desire of late to try to come to terms with the nature of Soviet communism and Soviet totalitarianism in a modern context. Maybe it’s a loose reaction to the rise of modern political extremist movements, a rebuke of Chinese human rights atrocities, or some kind of late European desire to re-evaluate the atrocities of the 20th century. Regardless, it’s given us a handful of excellent indie movies and miniseries that reexamine some of the most overlooked crimes of the 20th century.

The Death of Stalin (2017) eviscerated the Soviet ruling party as a parade of power-hungry clowns. Never Look Away (2018) contrasted the Soviet rule over East Germany with the fascism of Nazi rule and finds cause to reject both ideologies. Cold War (2018) explored a story of a decades-long romance set against the occupation of Poland. Chernobyl (2019) explored Soviet corruption and egotism by showing how the lies we tell to protect our narratives cost lives. Now Mr. Jones is here to burst the bubble on the Soviet Union’s worst human rights atrocity.

Most people are familiar with the holocaust but few people are as familiar with the Holodomor. In the mid-1930s, while the Soviet Experiment was still a burgeoning fascination that had enamored the intellectual classes of Europe and America, the Soviet Union under Stalin decided to scapegoat a group of successful farmers in Ukraine by ceasing all of their output and creating an artificial famine. Without food to feed themselves, these rich farmers starved en mass. Between 700,000 to 20 million people died depending on who you ask. It stands behind only Mao’s Great Leap Forward with one of the largest death tolls of the 20th century (20-30 million). 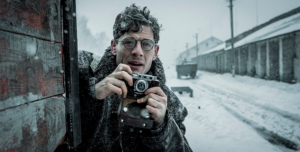 Some Severe Spoilers Ahead: If you’re not familiar with the Holodomor or any of its key historical players, watch the film first if the description of events intrigues you. The film is based on true events.

Mr. Jones begins in the midst of this great atrocity. At of the start of the film, nobody outside of the Soviet Union knows anything about it. All they know is that the country is growing economically at a disproportionate rate to its industrial growth. Western journalists reporting from Moscow all endorse this position but one journalist sees the contradiction. Gareth Jones, a Welsh reporter for English newspaper The Times, takes it upon himself to travel east to interview Stalin and figure out how the USSR is growing so rapidly. What he discovers is something so unbelievable that nobody believes him.

Mr. Jones is not a happy movie. It has moments of deep horror and despair. It’s a story about an artificial famine and at its worst we see streets lined with dead bodies and screaming children. Outside of Ukraine though, life just seems to be normal for most people living in London or Moscow. People have everything they need and people seem to be quite happy and satisfied. The Soviets consistently brag about how their new egalitarian society is producing incredible wealth and prosperity. Everyone has a job, nobody is starving and all public services and healthcare are being provided for free. This success isn’t without a cost though. The new Soviet economy is coming at the sacrifice of an entire nation’s famine. Sadly nobody cares. 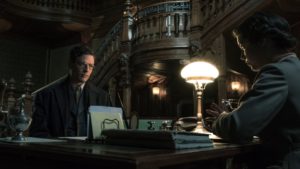 The western journalists who could make a point of informing the world are all too enraptured by the vision of the Soviet Experiment and happily default to the party line. As Gareth Jones prepares to make a move to expose the mass killings, a New York Times reporter, Walter Duranty, releases a piece in the most powerful newspaper in the world declaring Gareth Jones a liar. Jones is forced to take drastic measures and hand the story to the only publication willing to even consider his article. He hands the story to William Randolf Hurst; the same far-right tabloid owner that Orson Welles satirized in Citizen Kane as a corrupt immoral blowhard. Despite the story finally receiving some international attention, it was ultimately ignored. The Soviet Union got away with mass murder because the world simply didn’t want to believe it was true. Duranty, a Pulitzer Prize-winning journalist, never faced career consequences or had his awards rescinded, further burying the truth of Soviet crimes under the credibility of the most trusted names in objective journalism.

There’s a lot that can be read into Mr. Jones and its depiction of real history. It could be read as an excoriation of mainstream journalism, a polemic debunking of the resurgence of modern Neo-Marx movements, and a reflection of modern Europe’s reaction to horrific human rights abuses in China against Hong Kong and the Uygher Muslim minority. Coming from a Polish film studio, it’s hard not to see the film as simply an exercise in spite. Poland took some of the worst side effects of Soviet occupation from 1945 to 1991, and publicly rebuked communism when it regained its independence. Much of Poland and Germany’s film industry in the past thirty years has just been dedicated to working through the trauma of Soviet occupation. 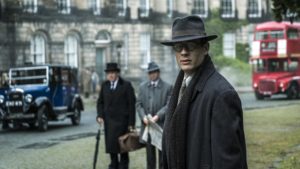 Regardless of what you take away from it, Mr. Jones is a deeply brave historical film. There’s a reason it’s taken nearly 90 years for a major film to be released about the Holodomor. Who at The New York Times or in modern European countries wants to take the blame for ideological mistakes that are still an ongoing part of our political discourse? It should be telling that The New York Time‘s own review of Mr. Jones fails to mention the paper’s complicity in covering up the Holodomor beyond merely denouncing their former award-winning Moscow correspondent.

How many horrific atrocities do all sides of the aisle ignore to protect their precious narratives? The answer is simply as many as it takes. Great visions for change are alluring and beautiful and that is their greatest weakness. Humanity desperately wants to believe it can escape hell or reality but every attempt to create the kingdom of heaven on earth has failed. If anything, the heart of Mr. Jones is confronting the reality of human depravity and the realization that there’s no escaping the fallen nature of man.

The heart of the film is best expressed in a scene late in the movie where Gareth Jones is confronted by, of all people, a young idealistic George Orwell. The future writer of anti-totalitarian masterpieces like 1984 and Animal Farm here looks in horror at the realization that the great hope of Soviet egalitarianism might be a lie. Jones replies and says that the Soviet Union is “the same exploitation but worse.” There’s simply no escaping the reality of human evil. There’s no kingdom of heaven on earth to be created by human hands. The more you lie about it the more people die. Because of this realization, we see the young Orwell turn around and write Animal Farm. Even if the world didn’t believe Gareth Jones at the time, a few people did and they would go on the win the war he tried to fight.

In the end, there’s no punishment to be dolled out beyond understanding the legacies of Gareth Jones, Walter Duranty, and the millions of people who died in the name of Soviet Egalitarianism. All we can do as modern viewers is to ask when we’re complicit to human rights abuses we know are happening right now.

While the reviews for Mr. Jones are generally positive, a number of critics feel that it's a bit underwhelming and doesn't attain its full potential. While I wouldn't call Mr. Jones a masterpiece, it is necessary viewing. It depicts real historical events people need to know about and does so in an informative and dramatic way that speaks to problems we're still dealing with nearly a century later.