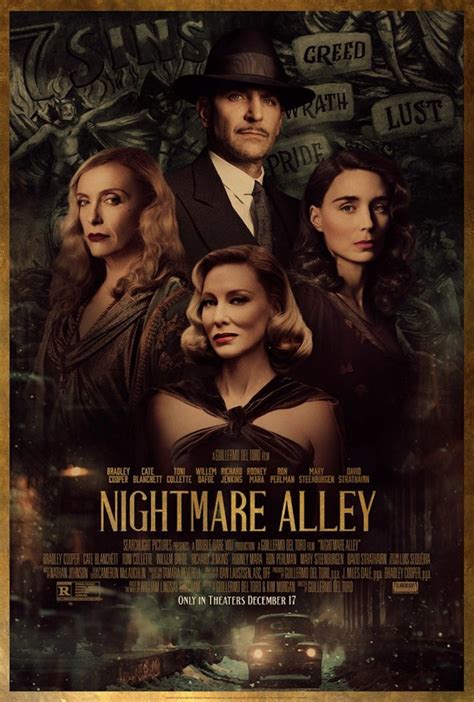 Four years ago, I made a pilgrimage with my best friend since the third grade to see Guillermo del Toro’s newest film while it was in movie theaters. This year, I didn’t want to pass up on repeating this new tradition and saw to it that I was able to see the newest del Toro movie over my Christmas holiday with my friend while I was in my hometown. I’m glad I did!

Guillermo del Toro is on my list of directors I probably shouldn’t love despite the fact that I do. Like many of my favorite directors, he’s a postmodernist and an atheist with an obsession with socially transgressive stories and the grotesque. His most famous film, Pan’s Labyrinth, is a fairy tale about the virtue of lies and disobedience. His most recent film The Shape of Water is an intersectional fairy tale about the evils of Christianity and masculinity that praises beastiality and communists.

Regardless, I love his work. He’s an amazing filmmaker who consistently delivers on imaginative, empathetic, and engaging high fantasy and science fiction films!

Violence/Scary Images: Several scenes of brief but excessive and very brutal violence; characters are gored, shot, and have body parts ripped off or crushed, and a man bites the head off of a (presumably fake) chicken.
Language/Crude Humor: Heavy and frequent language throughout including f***, s***, g**d***, b*******, and more.
Sexual Content: Several scenes of sexuality including partial frontal nudity, revealing clothing, and scenes/descriptions of rape and intercourse.
Drug/Alcohol Use: References of opium addiction. Characters drink heavily. A character dies of alcohol poisoning.
Spiritual Content: The film makes numerous religious references and allusions to religious imagery. The characters regularly compare religious leaders to manipulative con men.
Other Negative Themes: Depictions of murder, adultery, sex, and violence.
Positive Content: Themes of damnation, justice and sympathy for the oppressed.

Guillermo del Toro is my favorite kind of science fiction storyteller; the kind where the conceit IS the thematic purpose of the film. His films are ALWAYS about disenfranchised and freakish people and the humanity deep within them that makes them worthy of empathy and understanding. Add to that del Toro’s amazing production values, beautiful cinematography, and amazing scripts and you get many of the most imaginative and engaging genre films coming out of modern Hollywood.

Nightmare Alley is a fascinating film in that regard if only because it marks such a thematic shift in regards to del Toro’s usual thematic motifs. It’s an adaptation of the book of the same name by William Gresham (ex-husband of Joy Davidman, C.S. Lewis’ wife) which had previously been adapted into a Tyrone Powell noir thriller in 1947. Following del Toro’s financial and critical success with The Shape of Water, 20th Century Fox booked him to direct a remake of the noir film in his distinctly grizzly and bitter style.

If that isn’t a match made in heaven I don’t know what is. Nightmare Alley is a film in the style of a traditional nihilist noir thriller. It’s an ultra-bleak story about human folly and the way bad men dig their own graves through unrepentant evil. Films like Double Indemnity and This Gun for Hire come to mind in their similar hardboiled bleakness.

This film follows an initially unnamed man who is introduced burying a body under the floorboards of his living room before setting the house on fire. This man who we come to know as “Stan” (Bradley Cooper) immediately flees town on a bus before wandering into a carnival freakshow and finding work as a laborer. He ends up joining the carnival and hiding from the law in plain sight by helping facilitate some not-particularly legal sideshows at the carnival for money. Eventually he becomes so talented as a stage performer that he leaves the carnival and begins work as a con-man psychic who deduces stories about people’s lives and decides to use his tricks to perform an enormous con that could earn him an enormous payday.

From the start of the film, we’re told Stan is an awful person. He’s a murderer, an adulterer, and an extremely talented liar who is able to use his charisma to control an audience, or convince a person to let down their guard and think he has a special ability to communicate with the dead. The movie is evenly split between two halves: the first half at the carnival and the second half following his escapades as a con man in a major city. The throughline of the film is his journey as a con man as he learns to be more manipulative, making worse and worse decisions that ultimately come to backfire brutally.

This is the noir formula of course. The evil man commits evil until the consequences of his actions destroy him. The end is predetermined and he could well have saved his soul had he simply not made selfish and cruel decisions. The story though is one of descent and the audience is made to watch this tragic morality play work its way from beginning to end. Images of hellish infernos are a common motif throughout the film. We’re shown scenes of Stan framed against a lit flame or walking through carnival rides inspired by Dante’s Inferno. The moral is always clear. This man is going to get exactly what he deserves.

Naturally, the movie enjoys some of Guillermo del Toro’s most common flourishes and excesses. While its main character is an object of scorn, the movie pours a lot of its empathy into the side cast. They’re depicted as dejected, abused men and women cast down by society. The female carnies speak casually of sexual violence while the men wear their burdens and addictions on their faces. The head carnie brags about spiking their alcohol supply with opium to keep them addicted and loyal to him and even keeps a feral man locked in a cage at all times and fed only live chickens before a crowd.

Thematically the film’s heart is quite clearly on the side of the oppressed while its main story tracks the path of its evil and manipulative protagonist who casually takes advantage of the goodwill of others for his own gain. One can sparsely imagine why a director would want to make a movie about manipulative, charismatic, and evil men circa 2018. It’s almost like there’s a message to the movie.

Naturally, the film also suffers from del Toro’s excesses. There are at least half a dozen scenes of excessive and unnecessary gore: ears torn out, faces crushed in, chickens having their throats ripped out, brutal gunshot wounds, etc. I won’t deny the man his pleasures and these moments certainly do highlight the depravity of its lead character, but they also highlight just how trashy and unfocused some of del Toro’s instincts can be.

Nightmare Alley isn’t a perfect noir film but it is an amazing noir film. It’s an amazing expression of Guillermo del Toro’s core themes as a writer and marks one of my favorite films he’s delivered in the past decade. Considering this is the same director as Pan’s Labyrinth, Hellboy, Pacific Rim, and Crimson Peak, it says something that this feels comparably excellent!

Nightmare Alley is another in a long line of excellent genre pictures by Guillermo del Toro. It's moralist, angry and bleak in its orientation, but it tells a classical story of damnation and hubris perfectly and personally in only the way a true auteur can!