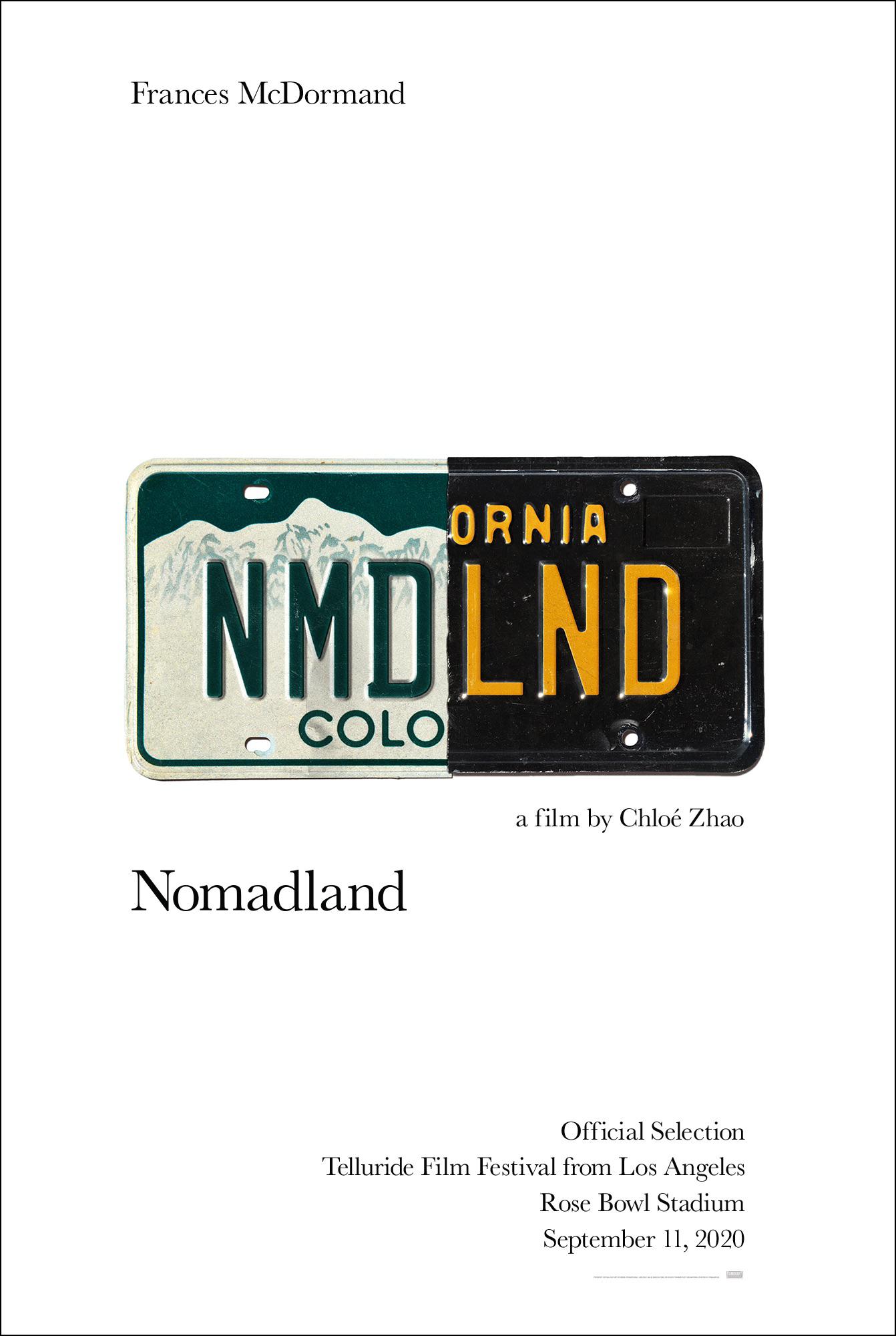 One of 2020’s most critically films was the low budget indie-drama Nomadland. Coming from newly up-and-coming director Chloé Zhao (The Rider, The Eternals), it’s gotten a fair amount of attention in the media. By itself, the film has been extremely well received by critics and is currently nominated and has already won awards at the Golden Globes, Venice Film Festival, Toronto International Film Festival and The American Film Institute!

Since it was just released on Hulu, the film is now more widely available for streaming and we can all talk about it! 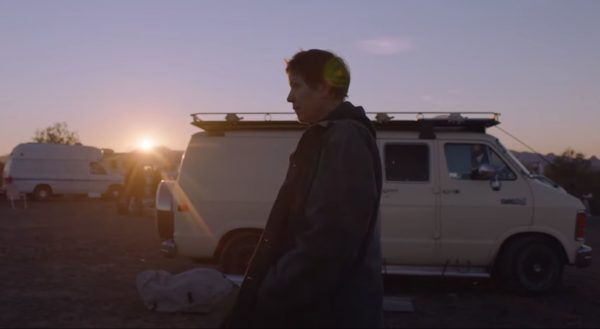 It’s hard to talk about Frances McDormand without talking about Fargo. McDormand’s career defining performance has followed her since 1996. Since then, she married the film’s director, Joel Coen, and has primarily focused on being a supporting actress in his films like Blood Simple, Raising Arizona, Man Who Wasn’t There and Burn After Reading. She has made an interesting career push in the past decade! In addition to working with Joel Coen and Wes Anderson, she’s broken out on her own as a reliable independent film star and producer with films like Three Billboards Outside Ebbing, Missouri.

Her newest film, starred and produced by her, comes to us from writer/director/editor Chloé Zhao. Chloé, late of small neo-western dramas like The Rider and Stories My Brother Told Me, is a Chinese director and is currently the director of Marvel Studio’s upcoming film The Eternals. The film itself based on the book Nomadland: Surviving America in the Twenty-First Century (2017) and built it into a two-hour drama.

The film is based on the real-life phenomena of older Americans who decide to forgo homeownership and a traditional retirement plan by living out of the back of their cars, vans and mobile homes while traveling across the country. Set over the course of a full year in 2012, Nomadland follows the life of one woman named Fern. Just a few years after the 2008 Recession, Fern has sold all of her possessions and began a life of travel, living out of the back of a van and working odd jobs across the United States. She travels everywhere from California to South Dakota, works jobs at Amazon and Wall Drug, and merely struggles to keep moving on a day-to-day basis.

The opening text of the film specifically sets up Fern’s circumstances for wanting to leave and take up this life. She lived in the town of Empire, Nevada (Population 4,000) until the local plant is shut down in 2011 and the entire town economy collapses. By the time of the start of the film, the town no longer even has a ZIP Code.

In addition to these economic devastations, Fern is suffering the grief of the recent loss of her husband. We’re told he loved the town of Empire and loved his job at the plant prior to its dissolution. Without much family to rely upon, Fern partially wants to keep his adventurous spirit alive by traveling the country and scraping out a living by herself. 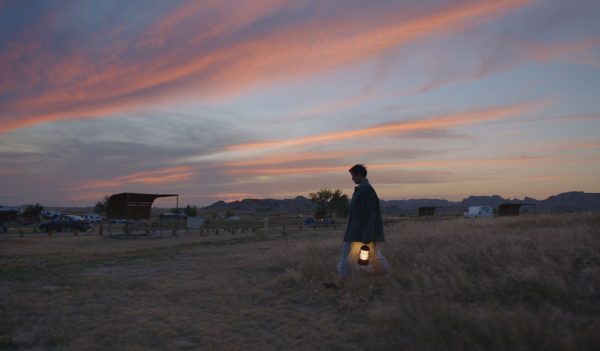 The journey of Nomadland is a pastiche of loneliness and depression. It’s clear that Fern loves people but she has deep trust issues and is pathologically resistant to setting down new roots and trying to build a new life somewhere. She doesn’t have kids and clearly sold her home when Empire was abandoned. She has no attachments and she’s pathologically adverse to finding new ones.

Even when family and friends offer to let her stay with them, Fern packs up and leaves. Driving her van as a new home is clearly her method of escaping her problems. By traveling, she’s able to work hard, provide for herself and meet new people along the way. She is, in a sense, unburdened. Even when bad fortune and intense pain come her way, she still stubbornly refuses to let bad luck impede her lifestyle and take away the meager living she’s found for herself.

Surrounding Fern, the cast of Nomadland is a massive collection of oddballs, screwballs and tortured souls who similarly struggle with the same problems as Fern. Most of the people she travels and lives with are retired, sick and older Americans who are on their last legs. Some of them are dying. Others have had others around them die. Some are merely economically destitute and need to find work wherever it’s available. 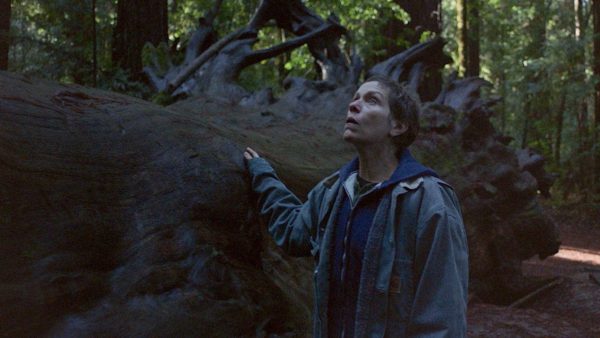 The titular “Nomadland” is a massive trailer park in the middle of the American southwest where thousands of elderly people accumulate in cars and trailers to live together, share time and trade stories. It’s almost a kind of modern “Hooverville” for retired and emotionally shattered baby-boomers sharing Fern’s life circumstances. Most of the film’s best dialogue comes out of these scenes as we get to experience each individual’s stories and come to terms with how they got where they are and consider where they are going.

I’ve had the opportunity to visit famous tourist traps like Wall Drug in South Dakota and it was fascinating getting to see it in a new light! 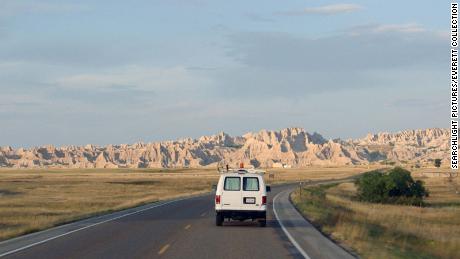 As a performance vehicle for Frances McDormand, the movie works extremely well and lets her gruff personality work on full display in a story filled with subtle anguish and unresolved pain. She plays unspoken sadness really well! Much as she was able to capture those emotions in Three Billboards and Fargo, McDormand shows up to play and really capture the heart of the film in a way most actresses simply wouldn’t be able to achieve.

As a drama, it’s very emotionally reserved and uncathartic. This doesn’t end up being a story about Fern coming to terms with her trauma and sadness. By the end of the story, she’s right back where she starts and then keeps her journey going despite the misfortunes of the past year. She’s still driving into the sunset knowing well that she’ll lose more friends and have more problems to fix. There’s no happy ending where she moves in with her family and lets go of her problems. The movie merely ends with shallow promise that there are no true goodbyes and that you’ll always meet the people you love again at some point.

Much like last year’s Devil All the Time, the film is a great piece of “Dark Side of the American Dream” literature that captures the intense sadness of the lives of those forgotten on America’s backroads. I just don’t think I’d recommend this as cozy family viewing or a good movie night for “the boys”.

Nomadland is one of the most impressive movies to come out of 2020 and it's understandable why it's a clear contender for this year's awards season!