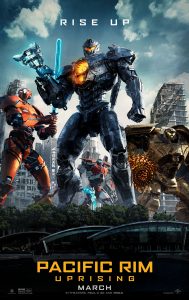 This is turning out to be a rather bizarre year, isn’t it? We lost Stephen Hawking, Toys R Us is no more, Tide Pods have become a delicacy, Ebola-stricken echidnas from Uganda are in desperate search of their monarch, and someone decided to make a sequel to Pacific Rim.  What’s next?

Violence/Scary Images: Strong fantasy violence, mostly between giant robots and giant monsters. Guns, electric swords/whips, and other weapons are used. Massive amounts of large-scale destruction. Minor characters die. A bloody hand is shown. Acid drips onto an arm. Creepy alien-related imagery. Minor wounds. A young girl is in peril during a flashback sequence. Humans punch and shove each other.

Sexual Content: Flirting. Two men both seem to like the same woman, and she kisses each of them on the cheek.

Drug/Alcohol Use: At a party, a main character pours a bottle of alcohol on the ground; empty bottles are littered in the pool the next morning. A main character later sips a beer.

Other Negative Themes: Some depictions of youth rebellion and rule-breaking.

Positive Content: Strong, rewarding teamwork is central to the story; loners and outcasts learn to work well with others and even form what’s described as a “family.”

One of the main characters is a young woman who can build her own robot and wants to become a pilot; she gets her chance. Another character changes from being a black-market dealer to becoming a pilot/inspiring hero. The characters are a diverse group of both men and women.

The global media landscape is a remarkable thing to behold at times. What was once detached esoteric information accessible only to those in the right position in a far-off land to receive such news is now accessible to even the homeless with a simple visit to a public library and a few clicks of a mouse. This has had a definite impact on the economy, as practitioners in the global market now have a much more far-reaching array of demographics to consider and serve. This has both positive and negative ramifications as just about everything does. In this case, it means that because of the virulent demands of Chinese moviegoing audiences, we got a largely unessential, uninspired, and uninspiring sequel to Guillermo del Toro’s surprisingly remarkable 2013 summer blockbuster romp Pacific Rim.

I’ve written before that one of the most effective body blows to the overall merit and value of any creative work is that it is being made out of perfunctory obligation rather than genuine personal inspiration. The results are almost always the stuff of a very poor meal, feeling more like a distraction than a worthwhile experience. In Pacific Rim Uprising, we have a clear and explicit example of filmmaking-on-demand that not only does little in contributing to the franchise but actually does a good deal of detracting from it. What’s on offer here feels like something that would be better suited as a direct-to-video production.  Considering the oeuvre of director Steven S. DeKnight whose best known for the sandal-and-swordplay Spartacus TV series, that’s not really surprising.

Ten years after the great victory of Stacker Pentecost (Idris Elba) and company, the world is quite understandably in a state of disrepair. The skeletal remains of the monstrous behemoths known as kaiju dot the lands and have become popular tourist spots and spring break getaways. In the midst of all this is the hitherto unmentioned estranged son of Stacker Pentecost, Jake (John Boyega), who has taken to a criminal life of selling the parts of the massive battle robots, or “Jaegers”, that have become decommissioned since the end of the war. His black-market career brings him into the company of one young Amara Namani (Cailee Spaeny) who spends her free time illegally building unregistered Jaegers with the conviction that the Kaiju will soon return.

Eventually, the game is up for the both of them as they are arrested by the Pan-Pacific Defense Corps (PPDC) and given a chance at redemption. For Jake, the chance to return to his position as a promising Jaeger pilot is offered on the condition that he also trains the new recruits, and Amara is given the chance to fulfill her dream as a Jaeger pilot by becoming a recruit. A brand new ragtag team of young brazen would-be heroes is introduced, though they are not given the same level of charm and intrigue that the folks from the last bout had.

In fact, fans of the previous film, including the Chinese audiences who demanded this follow-up, will most likely find themselves underserved by the lackluster cast this time around. While the actors give their all with what they’ve been given, the writers here seem to be completely oblivious to what made the 2013 film work on so many levels. It is often the case in tales of massive battles between godlike titans that the lowly human characters are little more than one-dimensional ciphers there to do hardly anything but offer a pittance of a means of engagement with the narrative. What Del Toro and company decided so brilliantly and executed so remarkably well is to make it so that the human characters were, in fact, the heart and soul driving the film. They each had unusually deep and robust arcs and motivations that actually made one want to watch their developments closely.

Equally brilliant back then was a certain plot mechanic that added an extra dimension to the characters’ psyches. In order to pilot the Jaegers, the two pilots functioning as the two halves of the Jeagers’ brains must engage in a neural meshing process known as “drifting”, in which the two pilots’ fears, hang-ups, and emotional baggage are brought into the foreground and put in their proper place so that the drift may be successful. It was a fascinating feature both in terms of mechanics and as a means of character definition and advancement that is thankfully still present in Uprising, though very little is done in the way of bringing about anything new with this feature. Had the filmmakers actually saw Boyega’s character as something other than just a tongue-in-cheek reference to his character from the new Star Wars trilogy, we might have been given some welcome insight into the unknown sides of not only his character but those of the characters from the previous film with which Jake ostensibly had an intimate bond.

In fact, the marginal-to-non-presence of some the favorites from the last outing is a fact about Uprising that raised my eyebrows a few degrees further than my comfort level. I can understand and accept Stacker’s place in the world as a legendary hero, but whatever happened to Charlie Hunnam’s character of Raleigh Becket? Supposedly, Hunnam was originally slated to take a role in Uprising, but a scheduling conflict barred not only Hunnam himself but even his character from any passing mention here.  Instead, Becket is functionally replaced by Scott Eastwood’s character Nate Lambert, whose biggest contribution to the film is that he’s played by Scott Eastwood. Rinko Kikuchi returns as Jake’s estranged adoptive sister and fan favorite Mako Mori, but fans sadly shouldn’t hold their breath. The best example of returns from the previous film are Burn Gorman’s Dr. Hermann Gottlieb and Charlie Day’s Dr. Newton “Newt” Geiszler, the two bickering scientists who developed a wonderfully affecting bond of mutual respect in the first film that translates well in Uprising, until it is upended by a development that I won’t dare spoil here.

As for the newcomers? Sadly, there’s not much to them but a laundry list of gimmicks. There’s hardly anything to them to write home about since the film portrays them so thinly itself. Sure, actors like Ivanna Sakhno and Mackenyu Arata have powerful screen presences, but that alone can’t engage an audience beyond the superficial. These Jaeger pilots function as little more than chess pieces designed to simply carry us to the next overwrought set piece until they get to play with the big toys in a moment of desperation. Said set pieces are availed by the fact that the apocalypse that was canceled in the first movie has seemingly just been postponed until further notice.

That “further notice” first shows itself in the form of rogue Jaegers that do a fine job of wiping out whatever remains of the Pan-Pacific Defense Corps leadership and leaves our heroes with a bevy of questions as to what the nature and motivation of the attacks are. The Jaeger program was continued in secret by Shao Corporation in hopes that remote-controlled Jaeger drones could be developed and provide defense against whatever campaign the kaiju could possibly be mounting. With the corporate conspiracy of Shao, the training of the new recruits, and the growing threats of whatever manifestation the kaiju are supposedly adopting, it can be said that there is a little too much plot going on here for the film’s own good. As many creative writers know, it’s better to be deep than wide, and the plot here is far too wide and not even close to deep enough.

With all that said, the experience was not completely without merit. Again, the actors really do bring their A-game to the table, even though they all are given little with which to make their mark. A number of famous Chinese actors such as Jing Tian and Zhang Jin earn their keep even though they’re really only here to appeal to the Chinese throngs who got this film greenlit in the first place. While the action sequences are certainly blown way out of proportion, they do provide some modicum of entertainment in the same way a fireworks display does. If that’s all you’re expecting in a sequel to Pacific Rim, dear reader, then please enjoy. Though the fact that you were expecting a sequel to Pacific Rim in the first place really gives me pause… 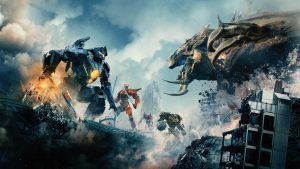 It’s alright, but it’s doomed to collapse if we take this much further.