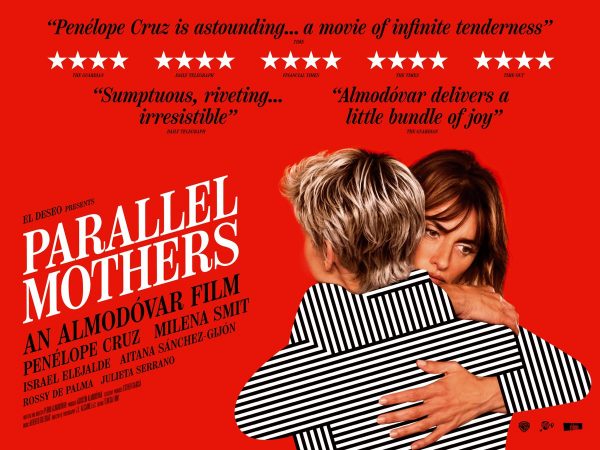 One of 2021’s major awards contenders is a limited-release, Spanish-language drama that has begun slowly releasing by territory over the past four months since its premiere in Spain in October. Prior to that, it premiered at the Venice Film Festival where it received a nine-minute standing ovation.

Parallel Mothers is a work of intense melodrama, energy, and humanity, that explores motherhood through a twisty, cliche story but grounds itself with its realistic characters and tone.

Parallel Mothers is a salacious little movie founded on coincidences and sweeping melodramatic moments of drama.

It starts out rather modestly. A female photographer approaches a married anthropologist and asks him to investigate the graves of her deceased family who were killed outside of Madrid in the Spanish Civil War. Before long their connection results in a sexual affair, a pregnancy, and a long drama of intrigue, tragedy, and surprises.

The title refers to its nominal lead characters, Janis and Ana, who are two single women who find themselves pregnant and giving birth in the same room on the same day. It’s an almost comic setup that in another movie could come off as contrived, but here it’s grounded in its deeply human characters.

Parallel Mothers comes from director Pedro Almodóvar, a filmmaker from Spain that made his mark in European art-house cinema with films like Women on the Verge of a Nervous Breakdown and The Skin I Live In, and is a prominent voice in Spain’s post-Franco counter-culture.

Americans will know him best as the director who popularized Antonio Banderas and Penélope Cruz prior to them becoming international stars, the latter of whom stars in his newest film.

Parallel Mothers has been slowly releasing over 2021 following a very successful tour on the awards circuit, which included receiving a nine-minute standing ovation at the Venice Film Festival. It’s slowly starting to release in North American markets following Christmas.

It’s not hard to see why the film has gotten popular attention. It’s a wonderfully written and directed work of drama that manages to be a contemplative and entertaining Spanish language drama.

The buzz-word swarming around the film is “melodrama”, with some critics even describing the film as a soap opera. Frankly, it’s probably more of a soap opera than many critics would care to admit. It’s a low drama packed with sex, scandal, adultery, and lies, and shot to emphasize bright pastel colors in its setting and costume choices.

The film never fully feels like a soap opera though. It’s an art-house drama first and foremost and its story is rooted in the very human and emotional struggles of its two women carrying the weight of single motherhood. The film plays out a series of accidental tragedies that compound into an emotional climax, before switching gears one last time to lament the human cost of Spain’s former fascist government in its epilogue.

It’s strange which elements of the story it decides to condemn and which it takes for granted. The movie is absolutely sacrosanct about the horrors of Spanish Fascism, to the point of moral certitude, but it hardly blinds at the immorality of its lead characters. It doesn’t comment on the adultery of its characters, the intense breaches of trust they commit, and how its central character, Janis, takes feminist pride in her single motherhood and her family’s tradition of raising their daughters without a man in the house. It’s morally libertine when it wants to be and strident at other times.

There’s a lot to Parallel Mothers and its stylized story and subtextual implications. Its rapid tone and grim melancholic story shift with precision by the hand of a very talented director. Regardless, its cavalier approach to sexuality will likely turn off more religious viewers.

Parallel Mothers is a lovely film if one with a lurid and mildly transgressive premise. It plays very loosely with moral concepts that should have major consequences but merely go uncommented upon, while the movie condemns other moral issues with absolute certainty. Regardless, it's not an overly pornographic film and many will enjoy its depiction of motherhood and loss.