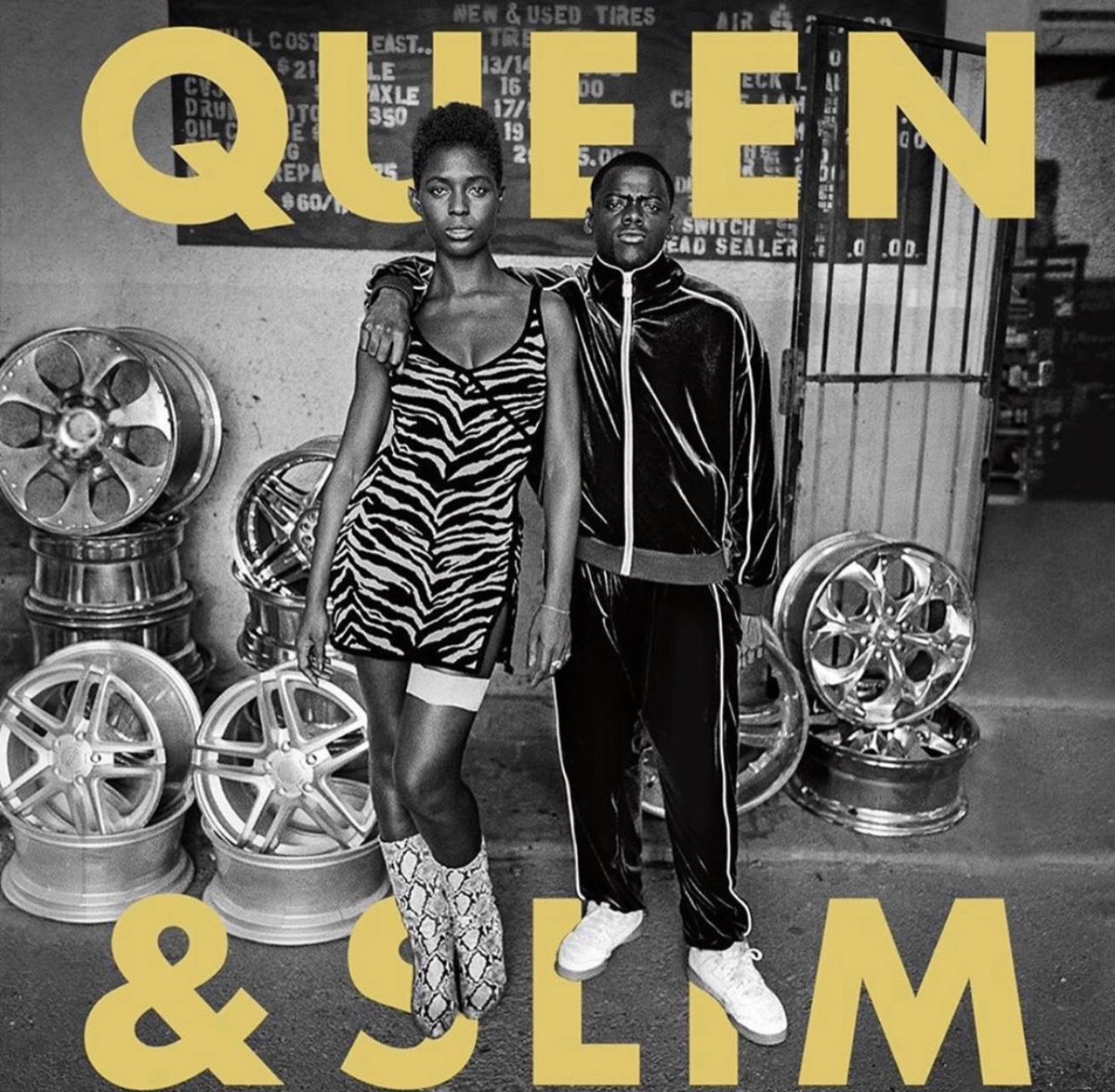 Yes, Geeks Under Grace is hosting a review for this movie. Even I feel compelled to disclose that when I was being spammed with previews for this film during Thanksgiving weekend of 2019, I wondered who would be interested in seeing what appeared to be a train wreck. And then I forgot about it.

Just a few short months later came The Photograph. After hanging out with some associates who praised it for not being a film that wallows not in black trauma, but instead, black love, I decided that I would double-back and watch Queen & Slim. After all, what kind of critic would I be if I did not watch it myself?

A pimp and his…uh, employee.

Queen & Slim demonstrates for modern viewers the aged, almost-forgotten genre of the picaresque. The anti-heroes in question assemble a ludicrous quantity of crimes in the name of liberty because justice failed them. Among their offenses are: resisting arrest, murder, fleeing the scene of a crime, kidnapping, identity fraud, grand theft auto, petty theft, and assault with a deadly weapon.

Expect to witness the consumption of alcohol, the smoking of substances both legal in all fifty states and others that are legal in most. Usage of vulgar four-letter words is abundant, and most of our readership at GUG will be less accustomed to hearing racial slurs.

Despite the presence of a pimp and his… employees, a sex scene takes place not in a brothel, but in a car, juxtaposed with a protest scene.

Yeah, that blue-tinted feeling when your heart feels like it leaps out of your chest.

Imagine that in 2004’s Academy Award Winner for Best Picture, Crash,  when Matt Dillon’s character, John Ryan, pulls over Terrence Howard’s Cameron Thayer and his wife, Thandie Newton’s Christine, instead of Dillon sexually assaulting Newton by groping her in her buttocks and vaginal area and telling Howard that she “Has a mouth on her…but I bet you knew that already,” a slightly different scene transpires. Instead in this hypothetical scene, Sturgill Simpson, as Officer Reed, pulls over characters played by Daniel Kaluuya (Get Out, Widows) and Jodie Turner-Smith (British TV shows Last Ship, Nightflyers) for the petty crime of failing to turn on an indicator before switching lanes. Their Tinder date had already turned as cold before Kaluuya had swerved to snatch his phone back from Turner-Smith.

This introduction to who will become the titular characters is one of Queen and Slim‘s highest points despite being an opening scene. I attribute this compliment to the fact that the film correctly assumes its audience to be intelligent socially-conscious beings. Here we go again, percipient viewers will be inclined to think, readily recalling victims like Philando Castille, Sandra Bland, and Patrick Harmon, a major subtext of The Hate U Give, or the scene from Crash above—all familiar and wretched manifestations of driving while black. Without this social and cultural literacy, this scene and the entire film is nonsensical.

“Are you a good lawyer?”

“Why do black people feel the need to be excellent? We should just be ourselves.”

Thus, after tolerating Officer Reed’s intentionally prolonged harassment, Kaluuya maintains his cool while Turner-Smith loses hers. A passenger, she exits the vehicle with the intent to intervene, exclaiming that she is a lawyer and demanding to know the officer’s name and why they are being detained (Kaluuya’s character apparently has not read Michelle Alexander’s The New Jim Crow, nor did Turner-Smith’s character bother to inform him of the wisdom in demanding a warrant for seizure and search). She refuses to return to her car despite Officer Reed’s warnings, and so he shoots her. The wound is not mortal, though during the shock and confusion, Kaluuya wrestles away the gun, and in turn, fatally wounds the policeman. Again along with the audience, Kaluuya and Turner-Smith’s characters fully comprehend the implications of what has transpired. Rather than wait around to get the Freddie Gray treatment or worse, they elect to become fugitives. 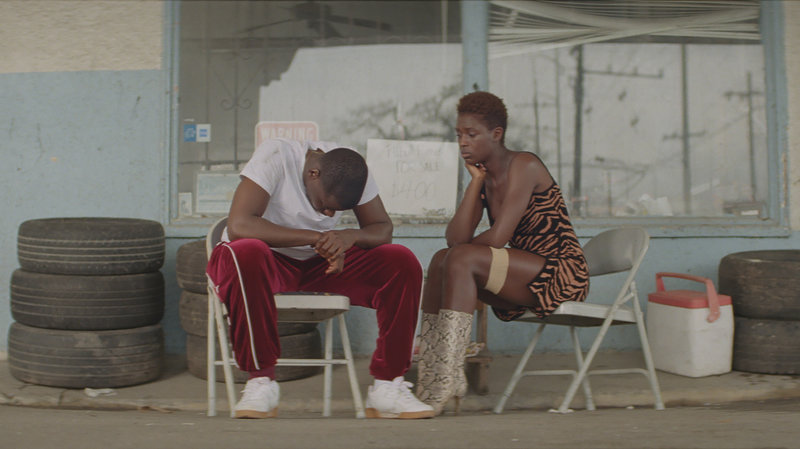 A (Black) (Power) fantasy, Queen and Slim brazenly embraces its function as the black Bonnie and Clyde, challenging viewers’ familiarity with the legends. In contrast, I know more about Looney Tunes Bunny and Claude, or Rocky & Bullwinkle‘s Boris and Natasha rather than the referent duo. Instead, my cultural capital consists of familiarity with movies such as Set It Off, from which Widows is a modernized spiritual successor. Queen and Slim, however, is not a heist, but pure escapism: what if we could get away with what they do so often?

Importantly, Melina Matsoukas intentionally violates the suspension of disbelief of this possibility as the film winks and nudges at the improbability that Kaluuya and Turner-Smith’s characters could be Running 1000 Miles to Freedom while undetected. The audience’s warnings to NOT try this at home come by way of extras  communicating lines directly to the central figures like, “Drinks are on the house”; “Don’t worry, you’re safe here”; and “I know who you are—I’m old, not blind!” These not-so-subtleties reinforce the possibility of living out a (Black) (Power) fantasy without encouraging real-life actions.

This scene reminds me of Will Smith’s Pursuit of Happiness, where the whole movie is sad until the end. Our protagonists’ relationship follows a similar trajectory, so all that happens here is just plain incongruent.

The conveyance of this message while maintaining good pacing rocks the Queen & Slim with turbulence. What begins as Jordan Peele-like induced horror when Kaluuya shoots Reed transitions into suspense when a sheriff assists the stranded Kaluuya and Turner-Smith, who have run out of gas. They ride with this sheriff to a gas station where he hears about their crimes on the radio inside the convenience store.

From this point, the film becomes a mood roller-coaster. From fear to rage to fear to peace to fear to stupidity, to wait—what? Fear picks back up again, then huh? Kaluuya and Turner-Smith lock the sheriff in the trunk of their original getaway car before commandeering his truck in a gesture demonstrating that they are capable of mercy where law enforcement does not.

This non-violent gesture is a potent statement, and Lena Waithe litters Queen & Slim with these intellectual interventions at the expense of the art; the result is an unevenly-paced film with convoluted messaging. A gas station clerk sees Kaluuya’s Glock in his waistline, and an intense moment morphs into comic dementedness. What is the point of this scene that could not have been accomplished in so many other “blown cover” encounters? Later, a child idolizing Kaluuya and Turner-Smith’s infamy stomps to the front line of an anti-police protest, and takes things way too far. In another setting, a pimp engages in a physical fight with one of his… talents over misplaced jewelry. What do these scenes have to do with the film’s focus with its renegades? Waithe gave director Melina Matsoukas too many subjects for her skill set to handle.

This scene is one giant “but why?”

If Issa Rae and Lakeith Stanfield demonstrated good chemistry in The Photograph, Kaluuya and Turner-Smith excel at getting along like oil and glue, electricity and water, or well-done steaks served with ketchup. The opening scene appropriately illustrates what a date looks like when an irreconcilable couple goes on one. After their encounter with Officer Reed, their relationship develops into something between cabin fever and Stockholm syndrome; the psychological equivalent of nails scraping on a chalkboard. So throughout Queen & Slim, when they figure out how to gaslight each other into a dysfunctional relationship, their unhealthy,  fatalistic tolerance of each other’s company undermines the otherwise progressive undertones of Waithe’s writing.

Is Queen & Slim a story about rebellion? Bucking the system? Injustice? An evocation of women’s lib? Love that blooms amidst chaos? I could not even say in good faith that the characters who would be dubbed “Queen and Slim” by the end of the film lived their best lives, because I would not describe their multi-day experience as living at all. The way that communities interact and rally around them amplifies the (Black) (Power) fantasy, but if this film is a shout-out to a figure like Assata Shakur, why not just make a film about her and jettison the excess?

A profoundly excruciating tragi-romance, Queen & Slim is the kind of film that one watches only to discuss among interested parties its bizarre attributes.