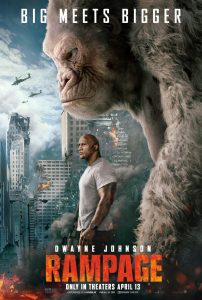 We live in a post-Castlevania world now. That means that someone broke hearts on the claim that video games and cinema can’t work well together. Obviously, this means that any attempts at a video game adaptation from here on out are going to face higher expectations than what was on offer previously. The guy behind movies like San Andreas and Cats & Dogs: The Revenge of Kitty Galore taking a stab at adapting a series of largely plotless arcade games from the 80s is not what I would select as the best step forward, but whatever.

Violence/Scary Images: Bloody, at times even gory action violence includes seeing the fatal results of genetically modified animals’ attacks on humans: The dead are shown eyeless, limbless, flattened into red goo, and blown up in explosions. People stepped on, crushed, and eaten (in one graphic scene, swallowed whole). Also several scenes of violence against the genetically modified animals, even George, who’s shot at again and again with military-grade weapons. Wide-scale property destruction; people are sometimes shown flying out of cars, buildings, etc. Paid mercenaries go on a mission to kill an animal and retrieve data. The armed forces are willing to risk a few casualties–and mass destruction–to wipe out the killer animals.

Sexual Content: Flirting and a few moments of touching/embracing–mostly out of protection/relief rather than sexual in nature. George the gorilla makes a crude gesture (index finger in and out of a fist) for sex.

Positive Content: Stresses the importance of teamwork, communication, courage as Davis, Dr. Caldwell, and even Agent Russell work together to come up with plan after plan to defeat the Wyden siblings and their evil scheme. Also explores how well-meaning research findings can be used for good or evil, depending on who’s controlling information, tools, and technology.

Davis and Dr. Caldwell are flawed but heroic characters who team up to save George–and the rest of humanity–from the out-of-control super predators. Agent Russell breaks some rules in the interest of the greater good. The Wydens are portrayed as pretty unambiguously evil. Viewers will empathize with the one animal (George) who’s most human-like; Davis’ ability to connect with animals is important to the story.

Of all the director-actor duos working in summer blockbuster cinema right now, the union of Canadian director Brad Peyton and not-Canadian film star Dwayne Johnson is not one of my personal favorites. The affairs are usually disposable romps of mindless action rife with awful dialogue, unconvincing and overwrought catastrophes, and little payoff for all the mayhem. Couple that kind of demonstration with the next major attempt at adapting a classic video game to the cinema, and you have a situation in which I had to conduct a private investigation to ensure the Uwe Boll wasn’t anywhere to be found on the credits.

With that suspicion thankfully laid to rest, I drummed up some optimism by noting that the director is certainly playing to his strengths in many ways. There really wasn’t much of a plot to be found in the Rampage arcade game series that was making the rounds in the 80s. The player was cast as a human who was transformed into a giant destructive animal through twisted genetic science and opts to respond to this turning point in life by wreaking havoc upon the nearest cityscape until the school bell rings. That’s about it.

To the screenwriters’ credit, an honorable attempt was made at embellishing this tale with actual arcs, characters, developments, and pathos. The plot opens with some shady illegal experimentation being conducted on a space station to further the recent technology of genetic editing into new and more profitable frontiers. As these things tend to go, the serum being developed has been unleashed on the Earth below thanks to a horrible accident, and the growing threat of catastrophe becomes ever more imminent. 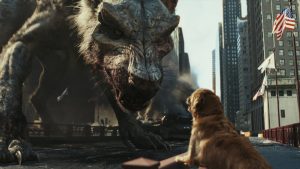 This threat is made more immediate by the focus on one Davis Okoye (Dwayne Johnson), an expert primatologist and former special operative who specialized in confrontations with poachers. Davis’ most fulfilling relationship is his friendship with George, a rare albino silverback gorilla who communicates via American Sign Language a la the recent Planet of the Apes prequels. This relationship has a surprising amount of depth to it, with both characters sharing some convincing tragedy to their backstory and palpable humor to their interactions. While the dialogue throughout the movie is honestly rather awful most of the time with inordinate amounts of unwarranted profanity scattered about, the jokes usually manage to land quite handsomely.

Also surprising is how engaging the buildup to the big showdown at the end was. Some might have been disappointed that the giant-creature-tearing-up-Chicago extravaganza took quite a while to show up to the party and opted to leave rather soon, but I never found myself disengaged with what was going on in the meantime. Sure, the twists and turns of the plot were both rather predictable and miraculously convenient, but the acting and direction kept the pace crisp and efficient. In the second act, Jeffrey Dean Morgan shows up as federal agent Harvey Russell, a quasi-villainous variant of The Walking Dead’s Negan with more sass than the movie knows what to do with, and he brings a welcome extra layer of awesome to this shindig. I’m pretty sure virtually all of Morgan’s performances from this moment on are going to be variants of Negan, to be honest.

With regard to the characters, the weakest link would have to be the central villains of Claire and Brett Wyden, a money hungry sibling duo and the heads of the corporation “Energyne” that manufactured the monster serum as part of “Project: Rampage.”  These dorks have virtually nothing to them that couldn’t be found in a cheaply made Saturday morning cartoon. That’s not to say they’re not entertaining–just kind of empty and perfunctory. George was inarguably the most likable and memorable of the bunch, played with finesse by motion capture artist Jason Liles, and Dwayne Johnson nails some impeccable chemistry with the CGI ape. The camaraderie they share was genuine and engaging, bringing highly appreciated catharsis to their team up and showdown with the other two beasts.

Thinking on the matter, I wonder if the team didn’t miss an opportunity at some fetching thematic strains by making the monsters just enlarged mutant animals this time around instead of mutated humans as they were originally. That certainly would have made the moral difficulties of attempting to eliminate these beasts that much stronger. Then again, I shouldn’t expect such a direction to be so believable in a mainstream format like this.

It’s not Netflix’s Castlevania. Not even close. But it could have been so much worse. I can say for all intents and purposes, Peyton and company delivered where it counts a lot more than I expected. Due to the surprisingly intense and gory violence coupled with the unnecessarily crude dialogue and frank, I’d strongly suggest hiring a babysitter. Actually, I’m kind of surprised this got away with a PG-13 rating. Great, now I gotta conduct another investigation. I’m pretty sure it’s Uwe Boll this time… 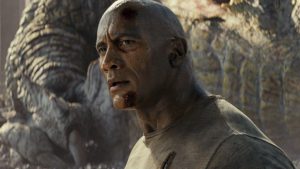 As far as video games movies go, this is one of the far better ones, but that’s no longer a worthwhile excuse. That’s being said, I probably liked it a lot more than I should have.