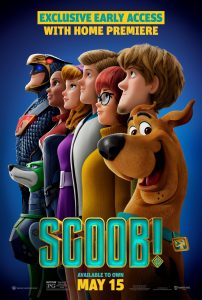 The trend of remakes shouldn’t be frowned upon as a concept.  The most profitable movie franchise of all time is naught but a series of reimagining IPs for a modern audience.  As I’ve stated in previous reviews, a great movie can be made out of anything.  Regardless, a diligence in actually figuring out basic principles of story is required no matter the initial material.  The announcement of a new feature-length Scooby-Doo movie was one that elicited little more than rolling eyes and passing sighs from me, but I was willing to give it a chance at least.  I honestly am at a loss for words as to how Scooby-Doo as a franchise ever managed to gain its initial fanbase or maintain such continuing popularity over the decades.  Guess I’ll wrestle with that along with whatever this movie purports to be…

Violence/Scary Images: Early scene in which a “ghost” chases the young Scooby gang. Shape-shifting robots can look both cute or like vicious, menacing creatures that shoot laser beams and sport threatening claws and teeth. A gigantic, glowing, scary Cerberus dog intimidates and tries to eat the gang. Several pursuits/crashes involving Dick Dastardly and the Falcon Fury ships. Dick Dastardly snags Scooby. In a sad scene, it seems like a long-lost friend is beyond saving; in another, Shaggy seems to be permanently parted from his friends (spoiler alert: both situations turn out OK).

Sexual Content: Comments like “she was pretty hot.” Scene in which an attractive cop stops the Mystery Machine; her hair tossing and (minor) cleavage briefly leave Fred speechless. Joke in which someone thinks Tinder is an app that delivers firewood.

Shaggy discovers his inner strength. The entire Scooby gang is devoted and loyal to one another. Scooby realizes his place is with Shaggy and the gang, not the Falcon Fury team. Brian has to let go of his father’s expectations to become his own Falcon. His sidekicks are clever, brave, and helpful.

For entertainment purposes, not education, but viewers will learn a bit about the mythological Cerberus, as well as Alexander the Great and his dog, Peritas. 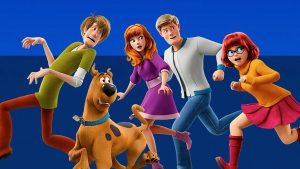 The 1970s are widely considered among animation historians as “The Dark Ages of Animation”.  There are a number of reasons for this.  Following the death of Uncle Walt, the loss of great talent at many of the flagship studios, and the rise of many efforts to impose tighter regulatory censorship on “children’s programming” (which, by this point, was considered synonymous with animation), the overflowing barrel of creativity and daredevil storytelling that animation forged from the ether was more or less no more.  Instead, what passed as “quality TV” was Duckman’s “steady diet of innocuous, childproof, flavorless mush.”

There were exceptions to the rule, of course.  For all his damning flaws, comedian Bill Cosby delivered a worthwhile and wholly entertaining experience with the Fat Albert series, and for whatever reason, the hallmark of Saturday morning cartoons for that decade was the consistently entertaining Scooby-Doo Where Are You? (which actually premiered in the late 60s, but whatever). With a simple premise of regular American teens and their titular Great Dane getting mixed up in various ordeals of ostensibly paranormal activity (only to be later revealed as an elaborate charade by some scheming con artist), Scooby and the gang managed to establish quite a fanbase for itself, and the franchise has carried on in various formats for over fifty years now. 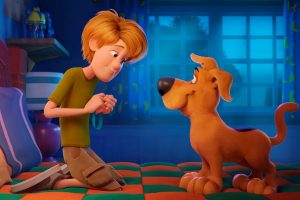 As a personal aside, I could never see the appeal in the whole concept.  Perhaps it was just “before my time”, but neither the original show nor its bevy of sequels, spin-offs, and film adaptations ever managed to resonate with me or anyone I’ve known personally.  Even one of my own animation professors admitted that it was anything but acceptable to be a cartoon fan during the decade of the 70s.  How then has Scooby managed to keep such a strong presence for all these years?

A full answer to that will require a better-informed mind than my own.  It truly leaves me at a lack of words in figuring out what fans of this franchise are getting out of it or how that appeal has been so ceaselessly maintained for over half a century now.  Even the live action Scooby-Doo flicks from the first decade of the twentieth century somehow gained something of a cult-classic following, so I suppose it’s only fitting that we’d take another crack at refurnishing Scoob and the gang for a whole new audience.

The screenwriters (all four of them) also think it’s fitting to take more than their fair share of cues from modern popcorn filmmaking and try shoehorning those tropes into a story that isn’t in any way suitable for so humble a production.  Atop the challenge of attempting to embellish what is meant to be an episodic series of contained vignettes into something resembling a sensible feature film, we also have a paper-thin origin story that no one really asked for and adds very little (if anything) to the experience.

The 2020 web-released film directed by Tony Cervone opens with a comically lonely Shaggy (played as a child by Iain Armitage) coming across an abandoned milk chocolate-colored Great Dane on the run from authorities after the latter made off with a stolen wheel of sandwich meat.  It doesn’t do much in the way of embellishing any new gravitas or empathy to the characters, and I found myself forgetting about it quickly.  The rest of the Scooby gang gets introduced in this flashback through a chance encounter during a bout of Trick-or-Treating that also presents a sample of the somewhat cringe-inducing comedic writing to be seen throughout. 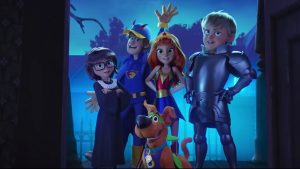 The bespectacled and intellectually prodigious Velma (Ariana Greenblatt as a child), announces herself dressing up as Ruth Bader Ginsburg, which Shaggy mistakes for a Harry Potter character.  When Shaggy asks “What house is she from?  Gryffindor?”, Velma shoots back “She’s a Supreme Court justice” in bewilderment.  “Oh, Slytherin” is the response.  Later hackneyed pop culture references include jabs at Tinder and other social media platforms.  Just a heads up.

Upon reflection, I realized that many of the handicaps found in Scoob! find parallels in Tartakovsky’s Hotel Transylvania trilogy.  Both are plagued by plots too thin to warrant a 90-minute sit-down and frequently stumble over themselves as they trek from one half-baked distraction to the next.  The key difference is that where Hotel Transylvania was aware of its own limitations and sought to make the most of them without biting off more than it could chew, Scoob! threatens to shoot for the moon by rushing straight for the end zone of a cinematic universe project without doing its homework.

Yes, friends, what feels more like a threat than a promise is suggestion of a “Hanna-Barbera Cinematic Universe” on offer here.  Among the peaks and troughs of the somehow overwritten-and-yet-underwritten plot are various appearances by many characters that made up the brunt of Saturday morning entertainment during the 70s.  The Blue Falcon (Mark Wahlberg) and his cyborg pooch Dynomutt (Ken Jeong) have had their respective relations as “straight man and dunce” reversed here, with the original Blue Falcon replaced by his irascible and self-absorbed son, Brian.  Tracy Morgan gives an odd turn as the primitive prehistoric superhero Captain Caveman, whose appearance in CGI is more unsettling than I expected.  I was kinda wondering if Hong Kong Phooey was going to show up at some point.

Wacky Races’ Dick Dastardly (Jason Isaacs) operates as the villain of this tale with a somewhat convoluted scheme that still doesn’t make much sense even after all has been resolved.  Rather than the kinds of crime mysteries and underhanded shenanigans one would expect, this involves a globetrotting hunt for some mystical McGuffins that unlock the door to another dimension of friendship or something, and Scooby-Doo himself (Frank Welker, who played Fred in the original cartoon) is supposed to be the last living descendant of some ancient famous dog, and goodness, why is Simon Cowell here???

I remember the first time I saw that Scooby-Doo made a pass at making the monsters real rather than some matchstick man in a fright mask.  This was the 1998 release of Scooby-Doo on Zombie Island, and while it was an appreciable turn back then, the charm was lightning in a bottle.  Ever since then, many other efforts at that sort of approach that came after proved to be more like sensationalist shock value rather than a mature and perceptive subversion of the established formula.  Scoob! doesn’t go for much in the way of shock (except when dropping the oddly placed “F-bomb” that’s not at all what you may be thinking, dear reader), but it does ring with the same generic vapidity as those other follow-ups to Zombie Island in which “the monsters are real”.

Are the gang themselves at least as fun as one could remember?  Hardly.  Fred Jones (affectionately played by Zac Efron) has none of the charisma or leadership of his past incarnations, occasionally whining about his outdated Mystery Machine minivan.  Daphne Blake (Amanda Seyfried) has really no reason to be here at all except to give catty remarks at what should be more exciting ordeals.  Velma Dinkley (Gina Rodriguez) retains some of her prodigious wit but is also beset with modern woke attitudes that make her more insufferable than I remember.  She even makes a stab about “toxic masculinity” at one point.

What about Scooby?  Ostensibly, his friendship with Shaggy (Will Forte) is the heart driving the film, and he’s much more selectively articulate this time around.  Rather than being an active player in this mystery, Scoob, Shaggy, and just about everyone else involved move about passively while what amounts to commercials for whatever follow-ups this shared universe is planning for plays on for an hour and a half.  To be honest, I could hardly make it to the end while sitting in the comfort of my home.  That’s one thing theaters can do that my house can’t: make me a truly captive audience.

One thing my home can do is provide easy access to an alternative means of entertainment whenever I need it.  Some friends of mine recommended the Mystery Incorporated series on Netflix, which I found to be not only an honest and well-constructed homage to the original Scooby-Doo series, but an incredibly engaging and multi-layered experiment in being original itself.  Scoob! hardly deserves the exclamation point at the end of its title, let alone the place in this Great Dane’s half-century legacy.  I understand that “direct-to-video” has to become the new norm for some time now, but just because we have to accept the format doesn’t mean we have to accept the low level of quality usually associated with it. 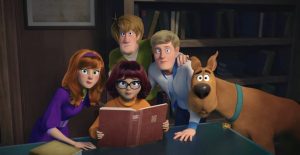 I’m getting into the habit of telling folks to try the Netflix alternative. This is no exception. All things considered, that’s probably for the best.