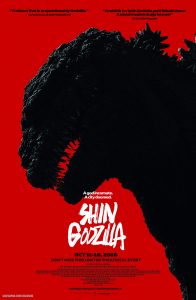 Following the immense success of 2014’s Godzilla reboot, the original creators of Godzilla at Toho decided to reawaken their studio and bring back the classic king of the monsters in a brand new monster film from the writer/director of Neon Genesis Evangelion.

Spiritual Content: Godzilla is referenced as a godlike being. 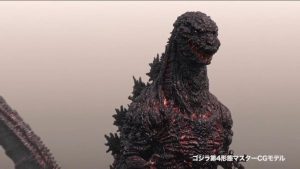 The five-year gap between Godzilla (2014) and Godzilla: King of the Monsters (2019) was an agonizing wait between main series entries in the Godzilla franchise. Prior to then, it had been a decade since we’d seen any previous Godzilla content. That’s not to say that the wait has been totally empty. Since 2014 we’ve gotten Kong: Skull Island which teased a resurgence of the monsters and an eventual fight between Godzilla and King Kong and we got the trilogy of anime films starting with Godzilla: Planet of the Monsters. Most importantly though, this surge of Godzilla content got Toho to finally awaken and produce their first in-house Godzilla film in twelve years.

Shin-Godzilla (also known as Godzilla Resurgence or True Godzilla) is one of my favorite films in the entire franchise. That’s a high bar (kind of) to hit given that it’s a franchise that’s delivered dozens of really awesome monster movies but this one hit a nerve in a way the other films in the franchise really didn’t. That’s not to say it’s technically a masterpiece or significantly transcendent compared to the others. It’s still a movie about a dude in a monster suit crushing cities. What made it really interesting was that it was the first film in the franchise since Gojira (1954) to tell a politically pressing and thematically driven story.

That isn’t to say that most of these films are innately apolitical. The entire franchise is about titanic forces of nature duking it out with modern Japan was a zeitgeist understanding of Japan’s place in the world as a non-militarized country at the height of the Cold War. What sets Shin-Godzilla apart from the majority of the franchise is its thematic complexity.

I owe much of this review to the venerable Gaijin Goomba who provided an excellent analysis of the film from the perspective of someone living in Japan. He runs an amazing cultural outreach channel dedicated to explaining Japanese pop-culture and history from an outsider’s perspective and his analysis of Shin-Godzilla is intensely valuable for someone who suffers from language barriers and relative ignorance about Japanese life.

Shin-Godzilla is a metaphor for the 2011 Earthquake that ravaged Japan and subsequently caused a near Nuclear meltdown at the Fukushima power planet. The movie is taking the classic imagery of Godzilla as a symbol for nuclear anxiety and twisting it into a modern image of nuclear fear. In this case, it’s the fear that nuclear power plants could have drastic, destructive and unceasing consequences when handled improperly. In this case, the people mishandling it are Japan’s cavalcade of bureaucrats and politicians. These largely nameless characters make up the body text of the film. Every single action is depicted as resulting in a meeting, consultation or multi-part approval process that bogs down the first response to the point of detriment. The government isn’t even able to get Special Defense Force helicopters in the air for hours after the attack starts and they’re forced to call them off when the attack could result in two civilian deaths. 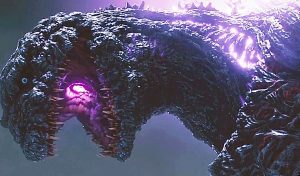 The film is a satire. Framing Godzilla in this way has the effect of adding a lot of thematic depth to the movie. It still comes with the same problems most of the movies in this franchise suffer from such as cheap-looking production design and unempathetic human characters but framed in this relationship of the Lovecraftian symbol of destruction versus the government creates layers of introspection that elevates the material. One of the great layers of this comes from the way the film contextualizes Japan’s role in its own self-defense. Because Japan is legally not allowed to engage in warfighting following World War II, the rest of the world (primarily the United States) takes the lead in fighting Godzilla up to the point where they threaten to nuke Tokyo to stop the monster. Understandably that carries a lot of baggage for the nation that once suffered the world’s only offensive nuclear bombings.

Godzilla’s rampage is a highlight in Shin-Godzilla for his franchise in a series known for city-wide annihilation. This time around Tokyo’s destruction is played off in a completely new way. For the first time in the franchise’s history, I felt uniquely disturbed by this attack. The imagery borrows heavily from World War II firebombing and devastation. There hasn’t been a shot that more exemplifies the human capital of disasters like this since the nuclear bomb dream in Terminator 2. This movie really wants you to contemplate just how severely the damage is going to change the lives of the millions of people who die or are left homeless by the carnage.

Without spoiling the ending, the plan to defeating Godzilla is incredibly creative. I wasn’t convinced of it the first time I saw it but realizing that this Godzilla is a metaphor for a nuclear power plant the solution makes a lot of sense. It resolves the international tension storyline by giving Japan a moment of self-actualization while offering some somber commentary on the fact that Japan just has to learn to live with nuclear power as a permanent presence in spite of the dangers it creates.

For a franchise that’s usually written off as children’s material, this take on the story is a breath of fresh air. Given my general frustration with some of the recent films and anime movies, Shin-Godzilla remains my favorite. It’s a shame that this will probably be the only traditional Japanese film to come out of the franchise for the immediate future since Legendary Pictures currently holds the copyright for the time being (and appears to have extended it to make more sequels). I don’t know if that means that future installments will forgo this radical take on the character in favor of a Millenium or Heisei era-style reboot of the franchise but I cannot wait to see what Godzilla movies will materialize in the future. Here’s hoping that the same creative team of this film returns! 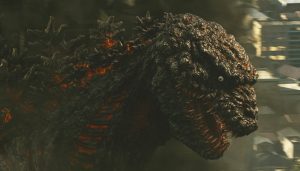 Shin-Godzilla is required viewing for any fan of Godzilla. I'm not sure how someone not already into this franchise would react to it.