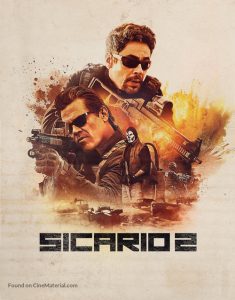 The original Sicario was Denis Villeneuve’s sophomore plunge into Hollywood filmmaking and it presented a lurid, immoral world of compromise and international espionage. Now screenwriter Taylor Sheridan and Italian director Stefano Sollima have come together to return us to this horrifying world to show us the story of where the morally compromised leads of the first film will go next now that the war between the US and the Cartel is escalating.

Violence/Scary Images: Multiple scenes of harsh violence. No extreme gore, however, characters are shot, blood is depicted, and characters die implicitly brutal deaths. Several harsh scenes may not be appropriate for sensitive viewers.

Language/Crude Humor: Severe language throughout including dozens of uses of f*** as well as uses of s***, h***, and a**.

Other Negative Content: Characters regularly betray, murder, and express cruelty upon others.

The original Sicario released to an unexpected and ultimately unwelcoming audience in the fall of 2015. At this point, it was Denis Villeneuve’s third major wide released feature film since his breakout crime thriller Prisoners dropped unexpectedly followed by his smaller and weirder art house drama Enemy. Sicario also importantly marked the beginning of former Sons of Anarchy writer Taylor Sheridan’s transformation from television writer to the greatest living screenwriter of neo-western thrillers alive today. While its fanfare was limited outside of film buff circles the movie quickly developed a strong reputation.

Upon examination, one finds Sicario a sprawling immoral crime drama set against the casual horrors of the cartel’s gradual escalation of violence along the southern border. Bad people commit horrifying crimes so our bad people are sent in to stir the pot enough to make things worse for them and better for us. At the center of all this swirling chaos and moral compromise is Emily Blunt’s excellent lead performance. Her role is rooted in unwavering justice and horror in the face of the potential of escalating death and destruction. She’s the film’s entire conscience and its greatest source of empathy and righteousness amongst the casual cruelty. With such a pivotal performance at the core of that film where do you even take a sequel now that her character arc is finished and her actress isn’t signed to come back?

Despite Sicario’s tepid box office success, the people of Hollywood saw fit to continue the story of the first film with a direct sequel. Sicario 2 went through a number of name changes including Sicario 2: Soldado before finally sticking with Sicario: Day of the Soldado. Denis Villeneuve did not return instead choosing to focus on Arrival, Blade Runner 2049, and his upcoming Dune adaptations. He was replaced by Stefano Sollima, an Italian director most known previous;y for his gritty 2012 Italian police film ACAB – All Cops Are Ba*****ds. Taylor Sheridan returned as screenwriter fresh from his recent critical success with his trilogy of neo-westerns including Wind River and Hell or High Water.

Aesthetically this is a match made in heaven. The film still exudes the same voice and narrative clarity that defined Taylor’s first film. Stefano Sollima does an excellent job of recapturing the images of the first movie as well. Where he can’t recapture some of the grandeur that cinematographer Roger Deakins was able to, he more than makes up with it with grit and authenticity. The visual clarity on display during the action scenes in this sequel is perfectly on-point which is a lot rarer than you’d think. I wouldn’t expect a director I hadn’t have heard of to be able to recapture the look and tone of another more famous director’s work so cleanly but Sollima did an excellent job.

In regards to the story, however, my expectations of the film were of something completely different than what we ultimately received. Without the lead role of Emily Blunt portraying the film’s conscience, I had assumed that the plot was going to be an escalating series of moral compromises compounding in some sort of shocking final moment of nihilistic release where all bets are off and our heroes commit some sort of unforgivable act in the name of security. This film could have easily degenerated into the realm of exploitation schlock or at the very least crossed some very questionable lines. For good or ill it eschewed the much more controversial direction of generating into Deathwish/Dirty Harry territory.

Sicario 2 is a much less character-driven film than its predecessor. On the surface, this shouldn’t be a problem. To me, these characters as presented are not prone to being self-reflective. They’ve already been morally compromised years before the film. The problem functions in that the movie struggles badly to find a balance between building dramatic scenarios while simultaneously trying to dig our two leads out of the narrative pit of descending fully into a cruel abyss. The movie starts with an ISIS member attempting to cross the US-Mexico border in full fruition of the worst fears of how badly the border situation could escalate. From that point on the narrative starts having the rug pulled out from underneath it and harming the characters in the process.

It turns out that what we understand at the beginning isn’t the full truth and that truth is revealed at the moment that the most adversity crashes down on our two leads. This ultimately sets up a conflict that’s mostly about how these two leads will work themselves out of a terrible scenario of their own creation with innocent lives at stake and no backup. This is a clever way to restructure the story and one I didn’t expect at all. It also has the benefit of generating some of the film’s best scenes as our all but invincible projections of unceasing vengeance don’t leave much room for natural fear for their safety for the most part. I wasn’t afraid for the entire film that they were actually going to die despite the situations they were in and that zapped a great deal of tension from me. The result is a film that had me guessing what was going to happen or trying to reinterpret where it was going on the fly than sucking me in with intensity and holding me in my seat. Ideally, the film should be able to do both.

Admittedly I didn’t totally get the original Sicario upon first viewing. It’s quite possible this film will age much more maturely than its predecessor in my mind and I’ll come to see it in a new light upon multiple viewings. On its own terms at this point, the movie does struggle a bit. It keeps you guessing but I’m not sure the answers the film conjures are as satisfying. It’s possible the depths are lurking right there and that this is a film that needs to be sat upon and thought about more intensely. I’m not quite seeing what its intentions are. It’s possible if the rumored Sicario 3 comes to fruition we’ll get a more definitive last word on these characters and the unceasing moral compromise and cruelty that compounds their lives. Until such time we’re left with something more definitive. 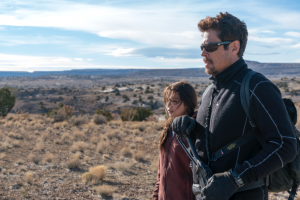 Fans of the sleeper hit original film will have a great time returning to the dark world and ideas with the added veneer of grit and new ideas. Sadly, however, it appears the film can't quite recapture the full strengths of the original Sicario.