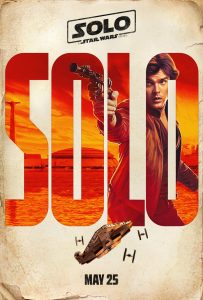 The fourth Disney Star Wars film is finally here! After a deeply tumultuous development cycle involving replacing the directors, reshooting significant portions of footage and doing this all while their previous film was getting run through the wringer, the movie is finally out and it’s mostly okay.

Language/Crude Humor: Multiple uses of light cursing including h***, a**, d***, and one unfinished s***.

Other Negative Content: Characters betray one another multiple times.

Positive Content: Themes of doing the right thing when it is difficult.

I’ve been rooting very hard for Solo: A Star Wars Story through its troubled development. I feel as though way too many people had written this movie off as a bad idea from the get-go. To me, almost everything from its inception to its casting to its choice of directors seemed logical within the frame of reference Disney was working from. Han Solo is the fan-favorite character of the franchise. After Harrison Ford’s departure in The Force Awakens, Disney would logically want to find a way to do at least one more film with the franchise’s most popular character. A prequel film would make sense because it lets you cast a younger actor who doesn’t exactly look like Ford.

Phil Lord and Christopher Miller were hot directors fresh off of The LEGO Movie and made sense to grab up to make an auteur crime thriller/western/space opera. Lead actor Alden Ehrenreich was fresh out of working with the Coen Brothers on their latest comedy Hail, Caesar! Grabbing him for the lead role for a star-making turn playing the most popular character in the most popular movie franchise ever seemed like an excellent pairing. There was a great deal of controversy at the time, mind you, and truthfully I understand where a great deal of that was coming from. Han Solo is an excellent character and attempting to recapture lightning in a bottle is a bit pointless, especially with a character whose appeal wasn’t based in his story importance as much as it was on his charisma and characterization.

Since the news of the film’s announcement, however, the film has been on a downhill slope. Solo lost its directors last year in a very public outing that resulted in Ron Howard being their replacement to reshoot a significant portion of the movie. We won’t know for sure what the exact reason for the departure of Phil Lord and Christopher Miller was until the tell-alls start dropping in the distant future but it’s safe to say either Disney didn’t like their direction or the quality was significantly sub-par and need to be reconstructed into something presentable.

This was clearly exasperated by the widespread negative fan reaction to Star Wars: The Last Jedi this past December. This blunder certainly lit the fire underneath everyone at Disney’s chairs. Simply put if Kathleen Kennedy and Lucasfilm can’t get the franchise back on track sooner than later there is going to be a huge fan backlash against the entire studio. Some fans are even going as far as to request Disney to give Star Wars back to George Lucas. I can only imagine how many careers are on the line with Star Wars: Episode IX. Alas, the best thing I can say for Solo: A Star Wars Story is that it is not merely a cash grab by a massive conglomerate of the ever-expanding Walt Disney Corporation. This is not a cash grab. It isn’t right to turn a movie into a variable money pit and Disney isn’t trying to. This film is an apology, an incredibly poorly worded apology.

Let’s get down to brass tax. On paper, this film’s story is pretty easy to lay out. This is the story of a kid with a heart of gold who gets beaten down by the world and turned into a cynical morally compromised criminal. That’s a really solid premise for a character-driven movie and it’s even a bit transgressive in the sense that it’s the exact opposite of the story that Luke Skywalker has to take during the original trilogy. This is also a very well-trodden path in the realm of cinema. Many of Hollywood’s best films are stories about great men falling from grace. Alas, our central character’s central moral quest of the film is missing. Han does manage to listen to one of the many lessons he’s forced upon in this personal journey, but at the end of the day his character never truly changes. He’s still cocky but now he kind of doesn’t trust anyone like Han Solo in the first film.

That doesn’t change the fact that there are dozens of failings such as the utter lack of an overriding thematic point to all the randomly assorted play toys in the background or the long stretches of boring runtime where nothing of consequence happened. The movie then tries to apologize for this by alluding to the potential of another Star Wars Story film they may or may not be making with a gratuitous cameo that won’t be spoiled here. Strangely enough, the big twist I actually thought would happen didn’t happen. There were several clues towards the latter end of the film that suggested the movie was building to an insanely transgressive and potentially powerful plot twist that never happens and instead gets replaced with a moment of extreme fan service that, having paid close attention to the recent canon of the franchise through books and TV shows, makes me wonder what exactly they’re alluding too.

On the plus side, the film is possibly one of the best looking films of 2018. There are several very well-crafted individual scenes such as the heavily advertised Kessel Run scene and some Act 3 shenanigans that manage to keep the film from getting too boring. Solo: A Star Wars Story isn’t bad overall but it’s spilling over into a bizarre new territory for a Star Wars film. Most of the performances in the film are excellent including the previously criticized Alden Ehrenreich as well as Donald Glover, Woody Harrelson, and Paul Bettany who all put in solid performances.

There are great films in this franchise, terrible ones, and ones that are flawed but fascinating. This is the first time I can think of to ever call a film in this franchise outright mediocre. If this didn’t have the Star Wars title behind it might be a pretty okay science fiction movie. But with the full weight of its franchise and the reputation of an entire wing of the Walt Disney Corporation riding on the next few films in this franchise they can’t keep affording creating risky messes. Solo: A Star Wars Story went so far out of its way to make safer decisions that it drained all of its identity and as a result, it’s proving to be one of the least hyped and least critically acclaimed films of the fourth Disney has crafted. Considering the end of this film, I’m afraid now that Disney is going to steamroll the Star Wars division and turn Episode 9 into a fan service movie to “please the fans.” Speaking for myself and many others, I believe this franchise is too big to just turn it into a cash grab.