Review : Sonic the Hedgehog: The Movie

Sonic has been in enough Games and had enough cutscenes to fill a theatrical film. But, before we had a ton of fancy graphics and cutscenes (excluding Sonic CD and 3D Blasts’), we had Sonic the Hedgehog: The Movie . 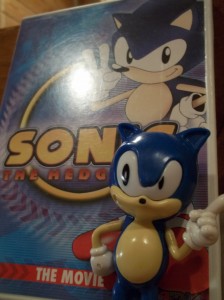 With Sonic, Tails, Robotnik, Metal Sonic, old Badniks, plus some new characters, this film (which is an anime) will definitely at least interest any Sonic Fan. Plot you ask? Well……

Sonic’s world is made up of two different dimensions : The Land of Darkness, where Robotnik previously resided, and The Land of The Sky. Robotnik took the President and his daughter hostage and sent for Sonic to come to the Presidential house right away. Upon arrival, Sonic and Tails are attacked by Robotnik’s Badnik’s . Later he reveals that his city (Robotropolis) was taken over by “Metal Robotnik” and his demonic robots. He claims that Metal Robotnik sabotaged the Robot Generator, which provides electricity for the entire city. The Robot Generator was still running, producing excess electricity. So much to the point that if it was not stopped by sun-rise the next day, it would explode, destroying The Land of Darkness and The Land of The Sky. Sonic doesn’t trust Robotnik, but he and Tails (equipped with a navigator Robotnik gave him) set off . The fight Metal Robotnik (with the help of Knuckles, who appears and stays for the rest of the film) and shut down the Robot Generator, but after the shut-down, Sonic’s life force data gets copied by the Robot Generator. After the generator collapses, freeing Sonic, the gang meet up with Metal Robotnik again. The Robot breaks in two, revealing Dr. Robotnik and the President’s daughter, Sarah. Robotnik informs Sonic of his newest creation, the Hyper Metal Sonic, which the three saw just before Metal Robotnik appeared the second time. Many battles ensue after this. Metal’s plan, (after believing he killed Sonic) is to destroy the ice glaciers holding the Land of The Sky together by piercing the ice, allowing the lava below to flow and melt it. Robotnik takes Sarah with him is his Eggmobile during all this, eventually telling her that they will get married after Metal Sonic destroys The Land of The Sky, an idea Sarah does not like. Eventually Sonic’s personality becomes active in Metal Sonic, and he saves the President and the Old Man from the burning ship they were in. Metal is knocked into a lava pit by a piece of shrapnel, but Sonic tries to save him. Metal reaches for Sonic’s hand, but then smacks it away, stating “There is only one Sonic.” and being covered by the lava. After it all, Robotnik displays a disc he has that contains Sonic’s life force data, but one of his faulty Badniks grabs it and detonates . The show ends with Sonic chasing Knuckles (who hit Sonic on the head for stepping on his earlier) with Tails following Sonic. Later he runs ahead after Robotnik, with the President, Sarah, and the Old Man, begin chasing him in the Eggmobile.

The animation is amazing. Rarely do the proportions of the Characters get off, and the emotion of the Characters is often properly displayed in some funny way, like them falling down when something goes wrong. The voice acting took some getting used to, but it is good, especially Dr. Robotnik. It’s also nice to have a story that is serious enough to be enjoyable (like SatAM) but very close in design the original Games (like AoStH) .

This film was originally a Japanese Anime, and if you didn’t know, a lot of things in Japan aren’t considered offensive that are considered so here. So some scenes in the film can be a bit adult. Though all were edited out of the VHS version (according to the film’s Wikipedia Page at http://en.wikipedia.org/wiki/Sonic_the_Hedgehog:_The_Movie ), most of them made it into the DVD release. Scenes are:

Sarah imagining herself and Robotnik married, she breastfeeding one of their children. She is covered enough that it is nothing major.

Metal Sonic’s head smashing through the floor of Robotnik’s Eggmobile, right under Sarah’s skirt. She kicks him in the head repeatedly, tells him not to look there and calls him a pervert.

Tails gets caught up in a snowball with Sarah and Knuckles, which crashes revealing Tails’ hand on Sarah’s breast. Though this situation is shown as a bad thing to do, as Knuckles tells Tails to get off, and scorns him saying “I never thought you’d stoop that low.” . Tails instantly jumps to his feet and apologizes.

So maybe the Sonic movie is for you, and maybe it’s not. In all honesty the scenes mentioned above are very short and very insignificant. But the current price and rarity is likely to keep you away from it more than the questionable content. But if you do have it, give it a rating! We’d love to hear from you! God Bless!

Character Designs largely based on Games Serious and comedic scenes Nice Voice Acting Does Robotnik and his Baddies justice No annoying, generic supporting cast Many Elements from Games Good Music

Despite some easy-to-overlook adult scenes, this movie really took the Games' elements and put them into a movie that fits just right.