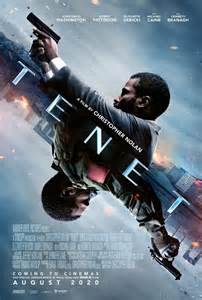 One of 2020’s most exciting film releases has been the eventual distribution of Christopher Nolan’s newest spectacle film, Tenet. The film was initially set for a July release prior to being delayed several times due to the Coronavirus pandemic. Efforts were made internally at Warner Brothers to consider releasing the movie on video-on-demand platforms, but Nolan was determined to release the film in theaters as he’d initially intended at the earliest opportunity. Now as cinemas are slowly reopening internationally, the film has dropped on a public skeptical of returning to theaters en masse. Is the film worth months of hype?

Violence/Scary Images: PG-13 level violence, fight scenes and content. A character is tortured offscreen, a character commits suicide, characters are shot, use guns, crash cars and brawl.
Language/Crude Humor: One use of f***. Some sporadic language and crude remarks.
Drug/Alcohol References: Casual drinking in the background.
Sexual Content: A man threatens to harm another man’s genitals. A character is accused of having an affair.
Spiritual Content: A character contemplates their damnation.
Other Negative Content: Themes of suicide, genocide and selfishnesses.
Positive Content: Themes of selflessness, justice and protecting life. 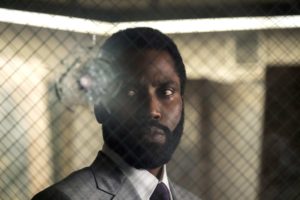 Discussion of plot elements visible in the film’s marketing campaign is mentioned below, but full descriptions of the film’s themes, structure and resolution will be avoided to protect the reader from spoilers.

It struck me early on that the first thing that happens in Tenet is its main character’s death. The unnamed protagonist (John David Washington) is introduced in a vague and strange way. All we know is that he’s a member of a cryptic CIA unit being sent into a hostage situation to remove a high-value target. When he witnesses something strange, he finds himself in the wrong escape van and dragged off to a Ukrainian train yard where he’s tortured to death to protect the names of his teammates. Immediately after this, he wakes up. As his handler tells him, he’s entered “the afterlife”, that he has passed a sort of test and he has a special assignment for him that only he can perform. Our protagonist is a man with no name, no life and no history. All we understand about him is that he’s loyal and that’s enough for the audience to want to follow him on a strange journey into the unknown.

His “death” does more than just wipe the slate for our unnamed protagonist clean. It signals a major theme in the film: death. Without spoiling too much, Tenet can easily be seen as an exploration of our relationship to death. It wants to transfix the idea of how we grapple with our demise into the audience so we consider the mortality of these characters as they grapple with the film’s events. Granted, that’s not a new theme for director Christopher Nolan. Films like Dunkirk and Interstellar wrestle with the reality of war and mass extinction. Few of his films have ever had such high stakes as Tenet does though. Thus the importance of our main character. By setting its protagonist up as someone that will put his life down to do the right thing, it establishes something important: life exists after we do. What we do has consequences and sometimes those consequences come back to us in ways we don’t expect. 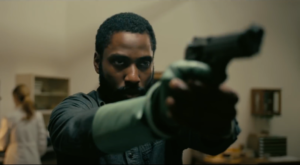 Of course, the film has a lot of ground to cover storywise. At first, this sets the film on rocky footing. I was legitimately worried for the first half-hour the entire film would be this breakneck and exhausting but it quickly settled into a good pace by the time of the film’s first major action set piece. It’s blasting through characters, concepts and exposition in an effort to get the audience up to speed with the movie’s cool techno-thriller superweapon that’s going to be the driving force of the film: time inversion. The concept in execution actually ends up being quite difficult to fully explain or conceptualize but as it’s clear in the trailers it has the effect of reversing the flow of time in individual objects. The film’s explanation for it is quite radical and takes a great deal of time to fully lay out, but by the film’s end you aren’t questioning it.

Once again, Christopher Nolan’s penchant for embracing narrative minimalism and spectacular visuals has only increased since Interstellar and Dunkirk. While his characters are reduced in scope to lacking names or histories, the backgrounds and fight scenes are larger than ever. We get to see a 747 crash into an airport hanger, a massive chase scene on a highway and an extensive final battle with some of the weirdest logistics I’ve ever seen in an action set piece. Tenet might be the single largest film I’ve seen in several years. It’s spectacle defined! 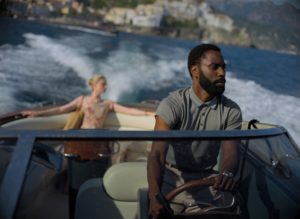 The spectacle serves the genre well. The film is clearly Mr. Nolan’s attempt to embrace the extravaganza and high fantasy espionage of the classic gentlemen spy movies, like James Bond, but grounded in his typical grim-dark aesthetic. Even with the morose tone, we still get all the trappings of the genre: scenic vistas, boat chases, car chases, handsome men in fancy suits, beautiful women, heists, double-crosses, over-the-top bad guys and doomsday weapons. Such fantastical elements reinforce the theme of an afterlife and death. Our protagonist has emerged from the life he once knew and crossed the threshold into a fantastical world beyond his imagination.

Of course, the genre dictates that the suave, handsome spy must always have a foil. Opposite our protagonist is the distant and enigmatic Andrei Sator (Kenneth Branagh). He’s a Russian billionaire who has gained access to the mysterious time-inversion technology who has figured out a way to weaponize it and cause a World War III-level event. I don’t want to say too much about his motivations or capabilities but the movie does a fascinating job slowly unveiling his full depths of humanity and revealing him as a fascinating counter-point to the protagonist.

Much of the plot just involves our Protagonist bonding and getting to know Sator so we get to spend a lot of time learning about his character. While Branagh initially looks like he only came into the role so he could put on yet another ridiculous accident (See: Jack Ryan: Shadow Recruit or Murder on the Oriental Express), you quickly begin to see the layers of his performance. He’s not just your average James Bond villain but a fully-dimensional person who is capable of summoning moments of deep terror, regret and resentment. This is some excellent work from Branagh that elevates a potentially silly character with a sense of emotional weight.

Tenet provides an immensely challenging set of themes and ideas as well as a great action movie. For some, I imagine it’ll be a bit much. The way it delivers and hides information at the beginning is tedious at times and the slow drip of reveals and information doesn’t quite match the intensity of the action. At times, I found myself spacing out because the length of the action was excessive and the film’s scope was dizzying. The consistent need to trace the logistics of what’s happening makes it exhausting at the best of times. I can’t say I was ever bored though and with a two-and-a-half-hour runtime that’s important. 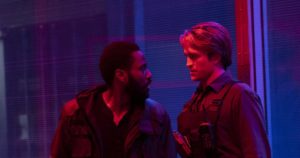 It is quite exhausting. Seeing it in an upscale Dolby theater, the sound mixing is so loud that my ears were ringing by the end of the film. Half the film’s dialogue was mixed underneath the environmental sounds too for some unholy reason. Regardless, Tenet is exciting and ambitious in all of the right ways. It takes on the uniqueness of its premise with boldness and intelligence to craft a story that excuses itself to indulge in extensive moments of beauty and massiveness just to show off its capabilities. Nolan clearly wanted audiences to see this in a theater for a reason: Tenet is a movie meant to be seen in all its glory on the big screen.

+ Deeply ambitious themes and story concepts.
+ Solid minimalist character writing and storytelling.
+ Existential themes of death, survival and the lives of others following our deaths.

Tenet is challenging but rewarding! It's exhausting but gratifying! Like all Nolan films, it's deeply ambitious and struggling to fully encompass an idea but it fully reveals itself to be a film of incredible spectacle, emotion and excitement!