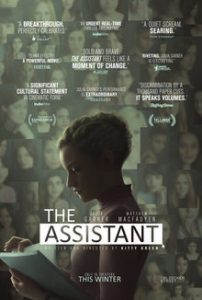 One of 2020’s quieter film releases was a small drama from feminist documentarian Kitty Green that didn’t catch much attention. It received a great deal of acclaim, but didn’t break out into popular opinion in the mainstream. It was, however, an interesting breakdown of the quietly horrific underbelly of the film industry that tries to expose the day-to-day life of office work in studios similar to the one Harvey Weinstein worked in.

The film industry isn’t all that romantic of a place. It might be if you’re Martin Scorsese or Steven Spielberg. If you’re at the top of the industry, it may be one of the greatest art forms in the world. But for the low level office drones and secretaries, it’s far from romantic. It’s a place driven by egos, long hours, and nepotism. You may be able to pay your dues and work your way up into wealth and fame, but it’s an industry that makes you work at its lowest levels for years cleaning, making coffee, and arranging trips for the people who actually matter in the industry.

It’s not surprising, then, that a movie that’s just about the day-to-day operations of an office assistant wouldn’t be the year’s most exciting movie. Despite being critically acclaimed by the majority of film critics, the movie only has a 25% User Score on Rotten Tomatoes. Maybe that’s because the film’s trailer set it up like a Rear Window style thriller with massive stakes and a ticking time bomb of a plot. It’s really not that. Then again, The Assistant isn’t just about the drudgery of the film industry’s lowest ranking assistants and secretaries; it’s about the realities of how a rigidly controlled industry like Hollywood can allow monsters like Harvey Weinstein to roam freely and repeatedly commit acts of sexual violence against innocent women. 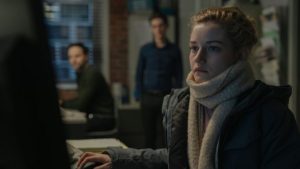 With that, we meet our central character Jane (Julia Garner). She’s a talented film student with ambitions to become a producer in the film industry who has managed to worm her way into a position as the personal assistant to a Hollywood mega-producer in New York City. Her life is quiet and lonely. She’s constantly darting around the office restocking food and hygiene products so the office can keep moving. Film is a busy medium, and that means constant meetings, flights, and cancellations. She merely needs to keep the rooms clean and drawers stocked so high powered CEOs and producers can keep moving.

Her boss is fairly enigmatic and distant. We never even see the producer she works for. We never see his face, and only hear his voice once obscured over the phone. He’s distant as much as her career ambitions are. She only puts up with the job because she knows he can elevate her career with the flick of a pen more than she possibly can on her own. Unfortunately, this is all thrown into doubt when Jane accidentally discovers he may be having an illicit affair with an underage actress. She tries to sound the alarm with her HR manager and is immediately threatened with implicit termination should the news leave the building.

The movie’s most salient point about the film industry is that people at the lowest level of the industry are mere cogs in the machine. They’re all replaceable. It’s a cut-throat industry, and anyone that decides to step out of line is replaced with someone just as talented who can do your job for you. The incentive structure is to stay in line and avoid being the squeaky wheel. This is how sexual predators and monsters stay in power. They make the cost of telling the truth too high while incentivizing the opposite. Keep your mouth shut and you will go very far in the industry!

The Assistant isn’t a terribly happy movie, and it’s not terribly exciting. It mostly ends with a wimper, but that’s the point of the movie. This isn’t the exciting story of journalists uncovering the seedy underbelly of the film industry. It’s a slice-of-life story about the impossibility of telling the truth. For most people working in the industry, there is no great catharsis or grand revelation. There’s only the tedium of carrying a horrible secret on the slim chance the powers that be may chose to pluck you from obscurity and grant you a chance at prosperity. If you can handle a movie that’s more honest than dramatic, then you might find The Assistant to be a movie you’ll enjoy.

- Deliberate pacing may put off viewers

The Assistant is a slow-paced drama that will challenge some viewers, but for others, it's a relaxed film and a break from action films. Not everyone will enjoy it or appreciate the message, but it's a great version of this sort of story!