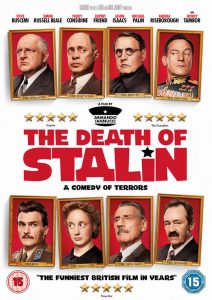 With the upcoming release later this year of Armando Iannucci’s newest film, The Personal History of David Copperfield, I revisited his previous cinematic outing from two years back. Needless to say to those who have seen it, it’s still funny and horrifying. Writer/director Iannucci, former showrunner of HBO’s Veep, performed a miracle bringing this slice of nihilistic English comedy into the world. He found the perfect balance between insane absurdist comedy and genuine human terror.

Violence/Scary Images: Numerous characters are executed via gunshot; blood spurts are shown. One dead character’s scalp is removed during his autopsy.
Language/Crude Humor: Severe language throughout, numerous uses of f***, c***, s***, a**, g**d***, h***, etc.
Drug/Alcohol References: Casual smoking and drinking throughout the film.
Sexual Content: Nothing depicted. Implications of offscreen rape.
Spiritual Content: One character is an outspoken Christian. Other characters talk about faith, the afterlife, and religious leaders in condescending tones. Characters allude to political oppression of religious leaders by communist officials.
Other Negative Content: Very bleak content; characters are murdered and crowds of people are attacked en masse.
Positive Content: Themes of justice and retribution. 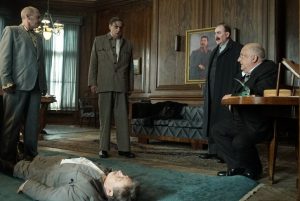 The first ten minutes of The Death of Stalin will tell you anything you ever needed to know about life in Soviet Russia under Joseph Stalin. Dissonant individuals are rounded up on the streets and loaded into vans. People live in fear of the possibility of merely inconveniencing or misspeaking about the great leader. Stalin signs a list every night of people he wants rounded up and eliminated, and as we see, it’s a paltry and common task for the secret police to receive these evening orders. In the grip of the 20th century’s cruelest dictator, the Russian nation is wrapped in fear and despair. Nothing escapes Stalin’s grasp.

Then a miracle happens. The smallest piece of paper slips by all of his defenses. A single woman is brave enough to speak ill of him in a letter written to him, castigating the ways he has betrayed his people. Stalin laughs and falls to the ground with a cerebral hemorrhage. He dies the next day, surrounded by his legion of lackeys and political allies. He can’t be saved because all of the best doctors in Moscow were killed on false pretenses. All of the power of the Soviet Union can’t shield the most powerful man in the world from a drop of poison.

What follows is the machinations of the machine of Soviet communism in the days and weeks following his death. All of his allies and rivals working in the Soviet power structure are left to pick up the pieces, eulogize their great leader, and decide who the newest general secretary of the Soviet Union should be. 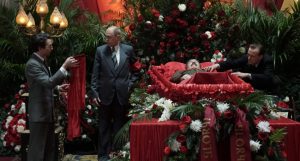 The Death of Stalin is one of the most “real” movies to come out of the last two years of filmmaking. It’s a blindingly dark satire about the machinations of political power. It’s also a movie absolutely everyone needs to see because it’s also the funniest original comedy to come out in the last half decade since What We Do in the Shadows. That might sound like a contradiction for a movie depicting events that are arguably as dark as Schindler’s List, but the movie owns it. It didn’t get a huge audience in 2018 due to a limited theatrical and physical release. Initially they didn’t even release it in America on Blu-ray; only DVD. The only available Blu-ray disk today is coded Region B for the United Kingdom. Now that it’s available to stream on Netflix, there’s nothing stopping everyone from seeing it!

I’ve described the film before as “Monty Python does Soviet Russia” and honestly that’s more than an apt description. The Python crew had no shortage of bite when they wanted to communicate a message, as we see in Life of Brian. It’s also appropriate as Michael Palin from Python shows up in this playing one of the film’s lead characters. You’ll notice immediately that the entire cast aren’t speaking with Russian accents. They’re all speaking varying degrees of British and American accents. They aren’t trying for realism. The Death of Stalin is something of a farce but it’s a farce with real consequences. The farce comes from seeing the absurd, hilarious and petty lengths these Soviet politicians are willing to go to get an edge on one another and gather power. It’s when you see the real people below them who get casually mowed down by machine gun fire that you understand the effects they’re having.

Each of these party men have different goals. Nikita Khrushchev (Steve Buscemi) wants to reform the Soviet Union. Vyacheslav Molotov (Michael Palin) wants to honor the legacy of Stalin and keep the old rules and orders intact. Stalin’s children, Vasily and Svetlana, both want their late father honored (albeit for different reasons). Maybe the only person who isn’t scheming is Marshal Georgy Zhukov (Jason Isaacs) who’s just happy to go along with others’ plans so long as he can reign carnage. Of the lot, Georgy Malenkov (Jeffrey Tambor) ends up becoming the de facto General Secretary, given his position. This proves to be a miracle for him because he was just placed on “the list” the night before Stalin’s death. He narrowly escapes execution. He quickly reveals himself to be a timid leader and the other party members start plotting around him.

The most nefarious of the party reveals himself in the form of Lavrentiy Beria (Simon Russell Beale). While it’s only alluded to in the film, the real life Beria was a serial rapist and a murderer, who used his position as State Security Advisor to get away with sexually assaulting thousands of Russian women and killing thousands of dissonants. As we see in the film, his scheming to gain power starts long before Stalin’s body is even cold. Still, the true reveal of who really gains power isn’t who you’d expect (unless you have a working knowledge of Soviet political leadership in the 20th century). By the end of the film, you get the sense that even a man like Beria is capable of being wrongly railroaded in a world this evil.

The Death of Stalin never stops being funny but it does get real. The final scenes do hit like a train. Mostly everyone I’ve shown the film to got hit very hard by its final scenes. You get the sense nothing was truly accomplished and that the great mechanism of Soviet totalitarianism will keep turning after all of the useless bloodshed. In the end, evil ends up begetting more evil. Even so, you’ll still find yourself laughing at the absurdity of it all.

- Potentially too dark for some viewers

The Death of Stalin is one of the best comedies of the last decade! It's sharp, dark and deathly hilarious! Well worth the watch!