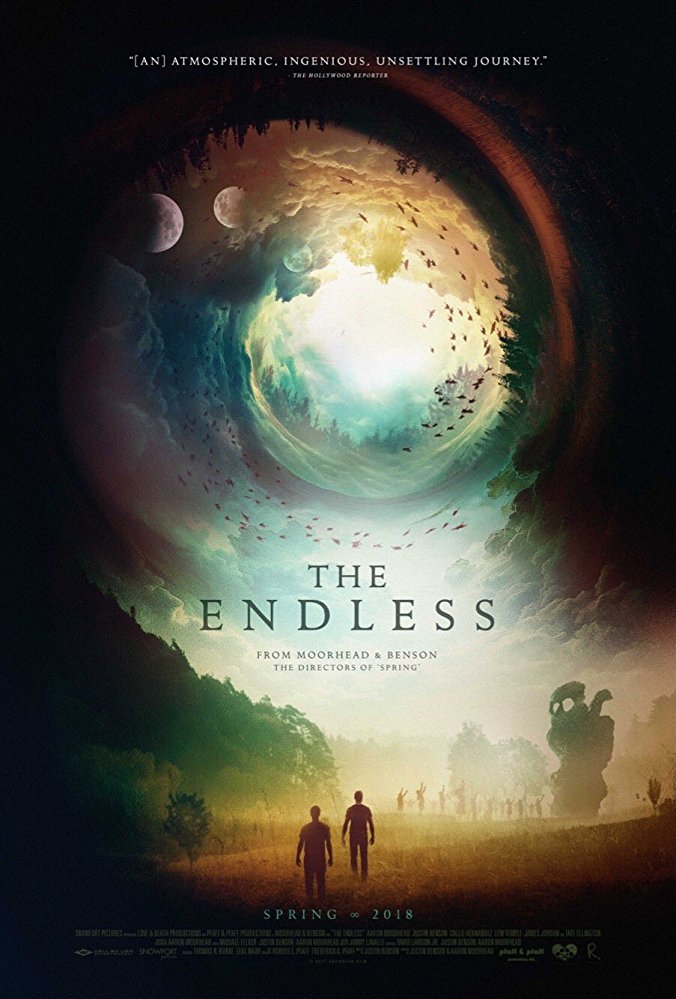 The above information should sound off a few warning bells. Did you notice? The co-directors also play the two leading roles. One also had a hand in writing the movie. A quick scan through IMDB will also reveal that Justin Benson and Aaron Moorhead’s names also appear alongside the cinematography and editing credits. In this regard, it seems that The Endless has a lot in common with student films, where most should never see the light of a projector.

It’s usually a horrible idea to undertake multiple film roles as it means that one element will suffer under the weight of another, which is normally easily avoided when every person is focused on only one aspect of the production. But there have been a handful of cases throughout cinematic history where someone has beaten the odds. Is this the case with Justin Benson and Aaron Moorhead?

The trailer may not look pretty, but the film’s mysterious storyline is what finally convinced me to give it a chance. Can a great story override a film’s other faults? I have a feeling it can, and as I entered the cinema, I also hoped that these co-directors could prove to all those aspiring student filmmakers out there that it is possible to make a fantastic film without the proper connections, provided you’re willing to put in the hard work.

Violence/Scary Images: This film is within the horror genre and is filled with a growing sense of unease. Supernatural events occur: trees fall in the distance, tug-of-war is played with an unknown presence, characters are chased by something in the lake, multiple moons appear, photographs fall from the sky, birds hit invisible walls, a person suddenly disappears, and the world disintegrates in a growing tornado.

Language/Crude Humor: The f-bomb and s-word are said by a small handful of characters.

Drug/Alcohol References: The colonists frequently say that the manufacture of beer is their main source of income. They are commonly seen drinking it and some characters become intoxicated. Characters also smoke joints made up of crushed flowers.

Spiritual Content: The movie constantly questions whether there’s a higher power. However, it’s a malevolent force.

Sexual Content: There is a misunderstanding about the phrase “slept together” during a conversation.

Other Negative Content: Rumors are spread about certain characters, which prove to be horrific once analyzed after the movie’s main plot reveal.

Positive Content: The film contains fatalistic messages, merged with an exploration of eternity. It explores both the good and bad outcomes of this worldview.

The Endless is an unsuspecting film that will sidle up close, slowly slip under your skin, and completely creep you out for days afterward. As a sci-fi horror, it’s a mentally intriguing story that will leave you pondering over the finer plot points well after you’ve left the cinema, with the added bonus of terrifying you the more you think about it. Sounds mortifying, but this is the sort of movie that cinephiles have been craving for a while now–an intellectually stimulating film that is out of the ordinary. The Endless certainly hits that niche audience.

We follow two men as they return to the cult that they had once fled, though while they’re meant to find closure, they simply stumble across one mystery after another. With every conundrum weirder than the last, viewers of the TV series, LOST, may worry that the film’s ambition may outstrip its ability to provide adequate answers. Thankfully, while The Endless is elegant with its complexity, it’s simple in its explanation.

If anything, after witnessing several turns in the plot, the straightforward reveal is slightly disappointing. This isn’t the type of intellectual thriller like Predestination where you literally need to start mapping timelines to comprehend the plot, or like Donnie Darko and Annihilation, which grossly leaves things up for interpretation. Rather the story’s structure shares similarities with Moon, where once you’re in on the secret, the movie is a simple watch.

It’s a sci-fi movie with a terrifying premise. That is, it doesn’t rely on jump scares or torture porn to deliver its horror. There are some deeply disturbing scenes, though it’s the actual plot that will prove most unsettling. This may seem like an odd comparison, but it’s similar to the Chris Pratt and Jennifer Laurence-fuelled movie, Passengers–visually there are some thrilling moments, but it’s the underlying ‘what if’ and its unceasing existential dread that will keep you up at night, wondering what you would do if you were in that situation. Those looking for the more traditional scares won’t find them here.

To explore its sprawling premise, The Endless comprises of a few mini stories within its overarching narrative. This allows the audience to witness the film’s concept when it’s stretched to its most extreme limits. The story at the furthest end of the spectrum, set in a mysterious white tent on the edge of the camp, still haunts me, as though it’s this film’s version of Room 237.

One of these subplots is a real treat for those who are familiar with Benson and Moorhead’s previous work. The Endless is actually a sequel. Or sidequel? There’s really no word for it as it’s more ambitious than M. Night Shyamalan. The film expands and enriches one of the stories the directors’ have previously explored, apparently giving greater context to their original movie, Resolution.

“Apparently” is the key word in that sentence, as I haven’t seen their previous work. Not many people have. Resolution was a very cheaply produced independent film made right when the two directors were first starting out. As such, and self-consciously knowing the viewing habits of its audience, The Endless isn’t an official sequel, and Resolution, while heavily referenced, needn’t be seen in order to make sense of the current movie. It’s more of a lovely Easter egg, where if you like the sequence, then an entire movie about two particular characters can be sourced.

In some ways, the subplots are more intriguing than the main story. It’s not the ultimate end product that is enjoyable, but rather the raw nuts and bolts of the plot. This is because the movie contains a number of flaws that detract from the narrative’s eerie flow. The film’s most notable shortcoming is its disruptive editing choices. Conversations between side characters and one of the brothers are cut short, popping across to the activities of the other sibling, only to then return to the original conversation. This disjointed presentation doesn’t propel the action forward, with the audience’s interest perhaps being better served if the film merely stayed with the original scene instead of dropping elsewhere in the midst of it.

While slightly ironic given the movie’s plot, it also suffers a bad case of repetitive action. When one brother finally receives the explanation he yearns, we watch as the other brother is also informed in a separate scene, unnecessarily doubling the narrative. How the film is structured in regards to revealing its secrets is also somewhat tedious to watch. One of the supporting cast is incredibly cryptic in his responses to the brothers’ inquiries, leaving the audience to assume that there’s no neat explanation of the events that are occurring within the cult. Yet a number of minutes later, another character manages to summarize everything in just a few short sentences. One might conclude that the first character was lying, but that doesn’t align with his motivations–there’s no reason why he couldn’t reveal everything he knew at that point, other than the fact that the movie needed to extend its runtime and introduce more conflict.

Once all the information has been conveyed, it sends a shiver of terror through the two protagonists and the audience alike. The stakes are incredibly high! Yet while the plot has implemented a metaphorical ticking time bomb, the brothers continue to casually walk everywhere. There’s a dissonance between the action seen on screen and the internal feelings of the piece. The characters’ movements were more in line with someone trying to reach their daily 10,000 step goal on Fitbit, whereas I’m positive most in the audience would be trying their best Road Runner impression in that situation.

Thankfully it’s not simply a case of bad acting. While they won’t be winning any Academy Awards for their performance any time soon, they are believable in their roles, and what they deliver suffices in telling the narrative. Considering all the jobs Benson and Moorhead have undertaken among themselves (acting, directing, producing, editing, cinematography, and screenwriting), they do manage to pull it all together. They are the exception to the rule; an inspiration for all upcoming filmmakers who find themselves needing to play multiple parts either because of a lack of funding or professional contacts.

A good portion of the film’s production elements may have been done on the cheap, but for what the movie lacks in presentation, it makes up for in its unsettling vibe and intriguing story. The trailer is a good reflection of what to expect–the film, particularly the opening act, looks like it has been overexposed or has fallen victim to poor color grading in the edit. Yet like The Piano with its blue-hued white balance, the assumed technical imperfections of The Endless slowly become part of its charm and style. Just like in the trailer, while its off-kilter presentation is glaring at first, it doesn’t take long to focus on the mysteries contained within the story, and the same experience is true whilst watching the full film in the cinema.

If you are intrigued and are looking for a movie to mull over, not minding some violence or disturbing images, then The Endless is an interesting watch that will satisfy your sci-fi itch. It’s not an overly cerebral film, though this also means that it’s more accessible for mainstream audiences as opposed to more metaphorical pieces like Annihilation and Mother! This is an independent film on a smaller scale than normal, so try to see this one in cinemas, as it may be hard to track down later on. If you do like it, then Benson and Moorhead may be a duo to follow, as it seems they enjoy creating stories that appeal to this niche market.

The Endless is a succinct sci-fi with a mortifying concept, proving that you don’t need to be big in Hollywood to produce a movie if you have an engaging story. It’s too off-kilter for mainstream audiences, but it will please those who are looking for a film that will plague their minds long after the credits roll. Unfortunately, while it does well with its meagre budget, the film’s lacklustre technical elements prevent me from scoring this higher.