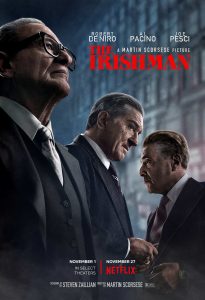 Following the incredible success of his two previous films, The Wolf of Wallstreet and Silence, Martin Scorsese is back with yet another late career crime epic. Naturally, this is familiar territory for the director of Goodfellas, which is appropriate because he once again teams up with Robert De Niro and Joe Pesci for one final reunion film. All that said, is The Irishman a gratuitous retread, or a film that lives up to the legacies of all these great talents?

Violence/Scary Images: Multiple characters are brutally murdered via gunshots, blood splatters. A character is cremated.
Language/Crude Humor: Severe language throughout including f*** and s*** used dozens of times
Sexual Content: No depictions of sex or nudity
Other Negative Content: Depictions of violence, corruption, and fraud
Positive Content: Themes of grace, penance, and guilt 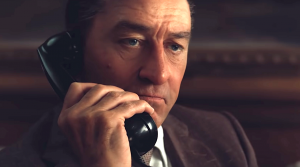 It’s rare to see an artist stay on top of his game for the entirety of his career. All too often the artist loses the special cocktail of synapses and creativity that allows them to craft great works of art and starts becoming driven by one urge or idea to the point where their work flounders. You see this frequently in the works of many of the great New Hollywood directors like Brian De Palma, Francis Ford Coppola, and George Lucas. They all started their careers as fresh young, energetic voices in the film industry before degenerating over time into parodies of their former selves.

Some artists, like Steven Spielberg, age out of the enthralling action/adventure movies of their youth and find more joy directing small personal films. Thus why his action movies like Crystal Skull and Ready Player One are infinitely weaker than his quieter movies like Lincoln and Bridge of Spies. Some directors even age into their skills as Paul Schrader recently did with his late period masterpiece First Reformed. The rarest position, however, is a director who stays consistently as good as he was when he started out. As his newest film shows, Martin Scorsese is that rare artist who is as enthralling, emotional, and ambitious now as he was from the outset. 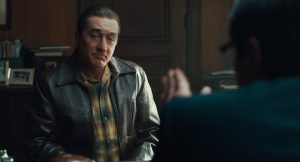 Martin Scorsese hasn’t lacked missteps in his career; he’s directed plenty of lifeless clunkers. He’s also guilty of returning to the same thematic and aesthetic territory too frequently. Goodfellas is a masterpiece, of course, but he’s returned to the organized crime theme again and again with spiritual follows like Casino, The Departed, and The Wolf of Wall Street (sorta). As such, hearing about his late period return to the genre with The Irishman came off as somewhat tedious at its announcement. Coming off the highly praised and beloved Silence, which completely distanced itself aesthetically from anything else in his filmography, this felt like jumping back into the shallow end of the pool. Was it worth taking one more reunion tour when the 76 year old director only has so much energy and time left?

Evidently the answer is yes.

The titular “Irishman” is real-life union organizer Frank Sheeran who was allegedly tied to many of the Bufalino crime family as part of his work in the union. The film is based loosely on his highly contentious postmortem tell-all written by Charles Brandt, titled I Heard You Paint Houses: Frank “The Irishman” Sheeran and the Closing of the Case on Jimmy Hoffa. There’s mixed evidence in regards to its accuracy, as it claims all sorts of theories up to and including that he personally assassinated Jimmy Hoffa and had his hands in multiple elections, political scandals, and political careers which he personally influenced up to and including the Bay of Pigs invasion, the election of JFK, and the assassination of JFK. Given the real-life Sheeran’s questionable statements, the film is best regarded as a piece of speculative fiction. 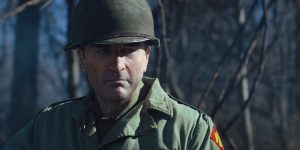 On a technical level, the movie is a miracle. Maybe the most interesting thing that’s worth discussing in the movie is its use of de-aging technology. The movie has dealt with production woes for years as Netflix has dumped upwards of $149 million into the film because of the cost of the CGI. In final analysis, it’s completely seamless. I can’t tell you most of the time whether the actors are using facial makeup at any point in the film because of how perfectly it’s been implemented. Obviously this isn’t the first movie that’s used special effects to change the age of an actor, but here it’s darn near perfect. Considering this movie has to tell the entire life of one man over the course of decades, displaying his age across years is vital. Seeing these characters age rapidly ends up adding a lot of weight to the passage of time.

Robert De Niro plays Frank Sheeran in the film’s leading role. He’s the story’s narrator and central character. As it’s being presented in the form of a late-in-life interview, it’s a long ramble of a story that jumps between numerous points between 1947 and 2004 almost arbitrarily and focuses entirely on his perspective. De Niro isn’t alone, though. He’s joined once again by fellow Raging Bull and Goodfellas co-star Joe Pesci in the role of Russell Bufalino. Pesci is marvelous in the film, playing a more graceful and wise character than his previous outings which usually give his characters more expressive personalities. Here he’s the coolest head in the movie playing the head of a crime family. 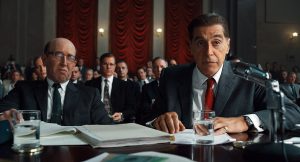 Naturally though, the movie’s most interesting performance comes with Al Pacino in the role of Jimmy Hoffa. The movie centers much of its plot and empathy around the famous historical figure of Hoffa, a nationally renowned union organizer and one of the most famous men in America following World War II who famously disappeared in 1975. Pacino’s excellent performance feels like more than a history lesson for young viewers. He fills the character with immense emotion, amusing quirks, and a deep sense of ownership and entitlement.

The movie fills in the cracks with great character performances by Ray Romano, Bobby Cannaval, Jesse Plemons, and Harvey Keitel who all show up with small but important roles in the story. Whatever you recognize these actors from previously, they really came to play and effortlessly slide into their roles. Some critics have called the movie out for its limited roles for female characters in the film, specifically Anna Paquin’s role as Frank’s daughter Peggy. In fairness, I think there’s a point to her silence in the film. She’s the only character in his life who is consistently aware of the fact Frank is a cruel, evil man, but she doesn’t have the strength to speak out about it out of fear. She’s a representation of Frank’s conscious and the fact he spends decades of his life acting cruelly. Her silence is deafening. 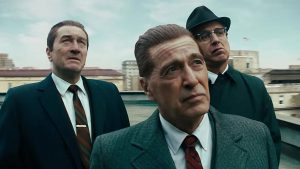 Thus is Frank’s journey throughout the film being one of ignoring your conscious and doing the wrong thing because it’s your job to. Without spoiling the movie’s ending, it ends up taking the characters to a very somber and sad place we really haven’t seen characters in other Scorsese films end up in. Most of the time, he cuts off his crime epics at the moment of greatest irony. As Orson Welles once said, “If you want a happy ending, that depends, of course, on where you stop your story.” The Irishmen takes our three main characters all the way to the end of their lives and we get to see the sad results. Over the film’s gratuitously long three and a half hour runtime, you REALLY get to know these people and by the end you feel the pain of watching them disintegrate.

The real tragedy of these characters ends up being that they’re consumed by the forces that formed their bad decisions in life. Be it corruption, age, or spiritual entropy, these characters lacked a level of self reflection needed to allow them an internality in their spiritual lives. In the moments when their conscience arises, it’s squashed by the reality of the situation and the lives they’ve resigned to live. They must be cruel because their jobs are cruel, so they’re left to die in cruel ways. Live by the sword, die by the sword. One of the movie’s best regular jokes is that it introduces side characters with a description of how the real life person ends up dying, usually by being brutally killed. It highlights the somber, sad, and fleeting successes of these characters that their days are all numbered because of their bad choices. Thus the movie’s sad final image of a man opening his heart for the first time at the end of his life to the possibility of grace.

This is all an extension of Martin Scorsese’s much documented filmmaking philosophy. Nobody in the business is better at finding empathy in the lives of men who do evil. Nobody else in Hollywood looks into the heart of a hardened criminal and asks how that man tries to seek grace. The very real question of guilt and shame seems to be film’s ultimate question about life. Maybe this is something the director is very much feeling in his older age as he’s facing down the real possibility each film may end up being his last film. The Irishman feels like something of a penultimate statement in his filmography. It’s deeply personal. It closes the door on so many of the themes, aesthetic choices, and regular collaborators he’s been working with since Mean Streets in 1973. If he retired with this film, I would forgive him for ending his career on such a perfect note. 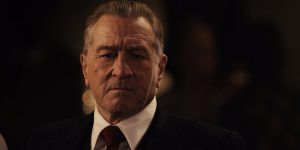 - Excessively long runtime that may alienate some viewers

Martin Scorsese has provided yet another late-period masterpiece following his immense acclaim and success with The Wolf of Wallstreet and Silence. In this final effort, bringing back many of his frequent collaborators and ideas one last time, he offers us one last chance to consider the same ideas he's played with his entire career.