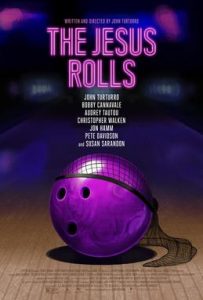 A sequel to The Big Lebowski? A sequel to one of the funniest movies of the 1990s and one of the masterpieces of two of our greatest living filmmakers: Joel and Ethan Coen? Sign me up! Alas, what could’ve been a unique chance to revisit some much-beloved minor characters in a contemporary classic reveals itself instead to be a sexually aggressive, libertine dark comedy with few laughs and a lot of uncomfortable nudity. 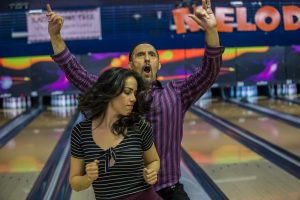 When I learned that John Turturro was making a pseudo-sequel to The Big Lebowski,  I was immediately elated. I instantly knew I was setting myself up for one of the most idiosyncratic and unforgettable film releases of 2020. I also knew I probably wasn’t going to get to see a good movie. The Jesus Rolls is working from a strange conceptual premise. Jesus Quintana is a minor character from the Coen Brothers’ seminal late-1990s dark comedy whose main job in the film is to serve as a nominal and ineffectual antagonist during the main character’s bowling nights. Making an entire film around this character seemed  like a half-hearted concept at best. I was still curious though to see if the film could revive any of the joy and edge of its predecessor.

I wasn’t expecting The Jesus Rolls to be one of the most lecherous and uncomfortable indie films I’ve seen in years. I’ve seen exploitation films with less overt sexuality than this movie and those films don’t put on air. The film is evidently borrowing heavily from an infamous French comedy called Going Places which I have not seen. I can’t speak to its functionality as an adaptation but it appears the core premise was transported over mostly intact. If the reviews for that film are any indication, it’s just as gross as the remake.

As we start the film, our nominal hero, Jesus Quintana, is being released from prison following a sentence for supposed inappropriate comments he made to a child which we see in a flashback were taken out of context. After his release, he meets up with his former buddy, Petey, and starts an aimless series of misadventures and petty crimes that ultimately put the two men on the lamb. During their adventures, they pick up a sexually frustrated french woman named Marie and the three of them begin bouts of sexual misadventures that result in the characters starting to rival with one another. 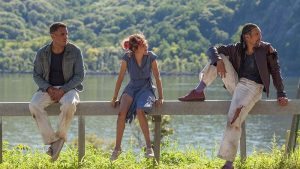 As my father pointed out the night we watched this, you’ll immediately notice there’s a severe lack of bowling in this bowling movie. This is an apt point if only because it highlights the distance this movie puts itself at from its predecessor. We never see or hear about any other character from The Big Lebowski, and the plot has nothing to do with the ideas explored in its predecessor. It’s its own beast completely, and by itself it really doesn’t stand up on its own terms.

In practice, The Jesus Rolls is something of a tone deaf jamming of the ideas from Bonnie and Clyde and Bottle Rocket into a single dark comedy/crime story. It’s a libertine comedy about characters roaming the countryside disregarding the rules of civil society. Unlike Bottle Rocket though it’s nowhere near as funny. It’s also not as decidedly transgressive and epic as Bonnie and Clyde. The movie is almost plotless at times. There are setups and payoffs and evolving character relationships but I can’t speak to what kind of arcs they’re building towards. Its entire second act focuses on the sexual exploits of its characters, and only seems to find any depth in discovering ways to emasculate the characters. At one point in the film, the uncomfortable three-way sexual relationship being explored by our lead characters is impeded upon by a third, younger man who enters their life and immediately upstages our two lead males, making them feel old and… Well, you get the idea. 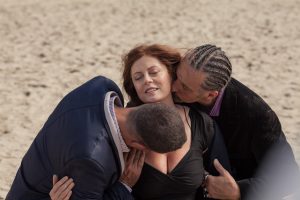 This is all happening in what’s effectively supposed to be some sort of on-the-run crime/comedy story. By the film’s end, there’s not much resolution. One of the film’s most important setups early in the film pays off and there’s not much of an actual consequence to the characters’ actions. They mostly get away scot-free to continue running on the lamb another day and playing part in their strange sexual arrangement. The lack of consequences in regards to the issues of crime and sexual libertinism come across as very modernistic and shallow. At the end of the day, the movie just carves a rut out for itself and expects the audience not to care. I’ve seen French movies, like The Bakers Wife, that approach the topic of sexual impropriety with maturity and a somber realization about the effects it has on society and its victims. So much of The Jesus Rolls and its approach to the topic is just mindless adolescent sexual angst gone amok.

I can respect that there’s some vision and passion to the project for John Turturro personally. He clearly went miles out of his direction to ask for the right to play his character (he started pre-production on the film in 2014, around when he asked permission from the Coen Brothers to use the character). This is something he’s evidently wanted to do since 2002 and I can respect the desire. The final product however is sadly gross and empty. It’s an expression of libertinism riding on the fumes of a great film. The film itself is almost a joke played on its audience. It’s as though the German “nihilists” from The Big Lebowski escaped their film long enough to direct a real life sequel to prank the audience. Alas, this movie has pretence of having something profound to say about sexuality and relationships, and I don’t see it.

The Jesus Rolls is nothing like the films that inspired it in terms of quality. While it's admirable that John Turturro was inspired to make this sequel, it doesn't accomplish much beyond celebrating a small group of libertine characters without much to say about their alternative lifestyle and the crime spree they leave in their wake.