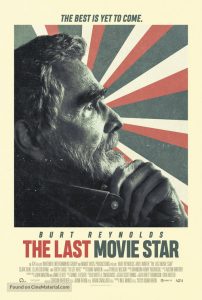 Once upon a time in the 1970s, Burt Reynolds was one of the biggest actors on the planet. He was the star of popular action movies and a massive sex symbol for his time. Decades later, Reynolds is returning to acting late in his life for a mini-revival. With his newest film The Last Movie Star, the one-time huge celebrity explores the regrets he holds for a life of sex and fame and his anxiety for his imminent death.

Violence/Scary Images: A character falls and hits their head hard on a TV.

Language/Crude Humor: Course and severe language throughout the film including f*** and s***.

Drug/Alcohol References: Multiple characters drink heavily throughout the film and drugs are referenced.

Sexual Content: Brief scenes of nudity, a character attempts to contact a prostitute, and multiple references to sexual activity.

Other Negative Content: Characters act out, yell and scream at one another, and abuse each other before admitting they’re wrong.

Positive Content: Themes of growth, regret, and moving on in life.

Every once and a while nowadays I’m surprised to find out that a celebrity is still alive (sign of the times I guess). Considering the mass die-off of major celebrities in the past two years I’m somewhat flabbergasted when I find out an ancient movie star is still around. Can you remember the last time you saw Sean Connery or Jack Nicholson in a major film? Despite them being out of the news for so long you may be surprised to know that both of them are very much alive and retired.

It’s just surprising to me since we don’t usually hear much about major actors, filmmakers, or artists ever wanting to retire out of the film industry. Martin Scorsese, George Miller, Clint Eastwood, Steven Spielberg, Brian De Palma, Hayao Miyazaki, and many of the great filmmakers of the past half century are all in their 70s and 80s now but the majority of them keep going because the urge to create and remain active as an artist is greater than whatever exhaustion comes with the burden of filmmaking.

Thus I recently found out about The Last Movie Star, the recent resurgence film of 82-year-old Burt Reynolds. The superstar of The Longest Yard, Smokey and the Bandit, Deliverance, and The Cannonball Run is not in his better days and here appears very explicitly at what we understand are among the twilight years of his life as the character Vic Edwards. Without the youth he once had, there is nothing to spur him and he’s now rattling about in an empty Hollywood mansion. His only companionship seems to be a similarly washed up and alone Chevy Chase who’s clearly in the same boat as Vic.

As our lead resigns himself to his lonely existence he wakes up one day to a letter from the Nashville International Film Festival saying that they want to give him a lifetime achievement award for his vast body of work. Upon flying to Nashville and arriving at the festival, he discovers that the only people who want to see him are a group of teenage film students who just wanted to pay him to come visit their movie group for the weekend at their local bar where they’re projecting his films onto a sheet. Somewhat despondent and disappointed by his own naiveté, Vic begins a bit of a personal journey over the course of the weekend through famous places in his life growing up in Tennessee. This allows him to do some necessary self-reflection and time to consider the full breadth of decisions he’s named in his life.

The Last Movie Star was a movie made specifically for Burt Reynolds. Director Adam Rifkin has stated that he would not have directed the movie if he specifically couldn’t book Reynolds for the role explicitly written for him. It’s clear that the fear of death and regrets of a famously overly sexed life have left Reynolds with some regrets and a great deal of anxiety and loneliness. What is having everything in the world at the height of your life when that world will eventually forget you and cast you off into oblivion? Some of the sweetest scenes in the movie come with Vic attending his former Synagogue and running into his former high school crush who is now an elderly woman in a nursing home.

Amusingly the thing I find most interesting about the film is how much it thematically upends his last critically acclaimed movie Boogie Nights. That movie casts him as a kind of patriarch and embodiment of everything that Paul Thomas Anderson clearly admired about the sexual revolution and free love. That movie was about him guiding and influencing the next generation of lovers, swingers, and pornographers into the 1980s as that movement slowly died and fell into the background amongst the rise of social conservatism.

This film casts Vic’s sexual improprieties as vain and selfish acts of his youth that robbed him of a more meaningful relationship and didn’t last beyond the momentary thrills he can’t recreate in his old age. The film’s climax is even a kind of grand confession. Despite Vic’s mourning and the fact that his days are numbered he really does manage to find a new lease on life and the ability to grow.

The Last Movie Star is not a great movie and in most regards, people aren’t warming up to it. It looks and feels intermittently like it was made for TV film shot by film students. There really isn’t a grand dramatic point to the way it’s constructed so the movie is mostly coasting along comfortably on performances and comedy. Vic’s characterization is clearly mining the public’s recognition of the character as there are several times in the film when he acts like an immature child and makes him very hard to empathize with beyond pity. There is also a bizarre subplot surrounding a young millennial woman who is dealing with a break up which provides some great inter-generational banter but doesn’t really go anywhere.

Visually speaking the movie reminds me a lot of the David Foster Wallace biopic The End of the Tour in that it mostly looks like a couple of great actors walking around a rural suburb for the duration. Whereas in that film it was slightly more forgivable because it was about one of the greatest writers of the early 21st century who just so happened to be a rural college professor from Bloomington, Illinois. Here it just looks like the producers could only afford to shoot in Tennessee because it was cheap. All things considered, though, I found The Last Movie Star to be a very engaging and thematically resonant film. There’s a great deal of meaning to watching an actor who at one point was a huge symbol of Hollywood looking back on his life with regrets and trying to find a way to look forward towards his later years. Flaws and all that makes the movie important. 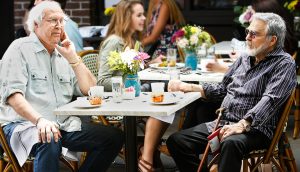 + Strong Themes of Redemption and Moving On + Emotionally Resonant Themes

The Last Movie Star is a fascinating exploration by a late in life filmmaker looking back at a life of highs and lows trying to come to terms with his failures and impending death. It's not a great film but it's powerful.