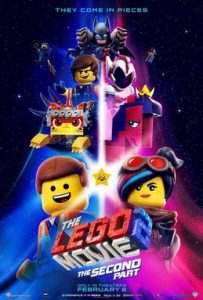 After a surprisingly long half-decade wait between sequels, the characters from The LEGO Movie are back in this long awaited follow-up. Set years after the events of the first movie, the characters now live in a wasteland brought about by an alien invasion from the planet Duplo. How will these characters handle this new threat to Bricksberg?

I cannot believe it’s been five years since The LEGO Movie dropped onto an unsuspected audience in February of 2014. That was a crazy month for movies in general. That same month we got the long-awaited remake of Robocop and Hideo Miyazaki’s final film The Wind Rises premiered in a small North American wide release. Of all three of those films, The LEGO Movie has remained most closely on my mind. It’s strange it took this long to make a direct sequel. It’s not surprising, however. Phil Lord and Christopher Miller quickly became hot properties in the aftermath of the film’s immense success, going on to finish their then in-development sequel 22 Jump Street before jumping all-in on Solo: A Star Wars Story and writing the script for Spiderman: Into the Spider-Verse. In that time, we’ve had two spin-off films in the LEGO franchise: The LEGO Batman Movie and The LEGO Ninjago Movie.

The first of the two was quite well done. It successfully spun-off their indulgent, immature take on Batman from the previous movie and played up his immature personality as the personification of the entire history of Batman as a film hero. Guided by Adult Swim veteran and Robot Chicken director Chris McKay (who is currently signed by WB to direct a Nightwing movie), the movie found a clever vein of satire that allowed to spoof the most popular superhero on the planet and simultaneously say something about how the culture views that character. Sadly, the second spin-off The LEGO Ninjago Movie was a more nakedly cynical cash grab. The movie more or less ripped the first movie’s father-son dynamic off full sail and buried the audience in references to a toy brand nobody over the age of 10 is familiar with. If anything, it’s a good example of how bad the series could’ve been in the first place if talented writers hadn’t been in charge of the first film.

Now we’re finally at The LEGO Movie 2. I was quite apprehensive going into this film. Five years of waiting and a set of largely mediocre trailers did not assuage my cynicism that the movie would be far flung from the sharp, satirical hero’s journey spoof the first film eviscerated. It didn’t help that the director this time wasn’t the original pair but Mike Mitchell, an animator whose credits include execrable films like Trolls, Shrek Forever After, Alvin and the Chipmunks: Chipwrecked and Deuce Bigalow: Male Gigolo. If there was any hope going into this film it would be that Lord and Miller’s script would save the film from falling into a cynical cash grab like The LEGO Ninjago Movie.

To my surprise, I walked away from the movie quite happy. Even without Lord and Miller in the director’s chair, their script still shines. It’s not as immediate and pressingly powerful as their last script for Spiderman: Into the Spiderverse, but here they managed to mine a really fun follow up to the original film. Functionally, the film reminds me a lot of Kung Fu Panda 2. The movie hones in on the central story of Emmet and Lucy and lets the vast side cast largely fall by the wayside outside of cameo roles and occasionally filling a role in the story. The new characters are solid, but have largely the same role. Don’t go into this film expecting to get a ton more Good-Cop, President Business, or Metal Beard commentary. They all show up, but their roles are minimized. Even the film’s previous standouts like UniKitty and 80’s Space Guy feel perfunctory in their roles. Batman gets a solid role, but he’s minimized given he’s already had his own spin-off movie.

What the movie does effectively accomplish is crafting a new story for the lead characters. On those terms, they’ve crafted a smaller, darker, and yet joyful and exciting follow-up that finds new and interesting ways to challenge the main characters. Obviously, the live-action segments that defined the first movie’s finale are back and here they’re meant to serve as the film’s new meta-textual expansion on the first film’s story.

At first, I thought the five year time skip at the beginning of the film was arbitrary, but it turns out it serves two purposes. The first being it covers up the fact the boy actor from the first movie has clearly aged five years, but  the movie cleverly takes advantage of this. To that end, we’re introduced to the movie’s secret weapon: Rex Dangervest. Like Emmet, he’s also voiced by Chris Pratt, but the gimmick is he’s effectively a stand-in for all of Chris Pratt’s post Parks and Recreation action hero characters from movies like Guardians of the Galaxy, The Magnificient Seven, and Jurassic World. His charisma and over-the-top hypermasculinity provides a wonderful contrast to Emmet’s docile personality, and ends up playing one of the most important roles in the entire story. He’s the embodiment of the young live-action boy’s adolescence. He’s indulgent, fun, and for good measure, quotes movies like Back to the Future and The Matrix that Emmet wouldn’t understand as a kid’s toy.

There’s a lot on the movie’s mind, but the big theme Emmet, Rex, and Lucy’s stories explore is fundamentally about the question of maturity. It’s a mild retread of the concepts the first movie played with in regards to Will Ferrell’s character, but here they’re more blatant about the implicit meaning of maturity. The LEGO Movies are fundamentally deconstructions of modern Hollywood filmmaking. They have a lot on their mind, but beneath the textual explorations about creativity, conformity, and movie references, these are stories about the difference between what we want and what we need out of our stories. The first movie perfectly encapsulates this in the resolution between Emmet and Lord Business, as the tension between the every-man and the all-powerful tyrant is mirrored by the image of a father handing his son the tools that will allow him to be creative and prosper against his own desire to be domineering and a perfectionist.

Without spoiling the ending, The LEGO Movie 2 ultimately boils down to a similar confrontation as the first film, but here the resolution has darker consequences should the characters fail. I haven’t talked much about Lucy’s arc, but more than any other character this ends up being her story. Emmet and Rex have a lot going on, but the film’s conflict about adolescent wants versus emotional maturity is best imbibed in her story. Given how central her story’s resolution is to the themes, I don’t want to elaborate deeply, but regular moviegoers will probably be able to guess where the story is going based on how overtly it goes out of its way to foreshadow. There are several plot twists in this movie I picked up on way before they happened, including a massive red herring I saw from a mile away. The movie, however, makes it work.

The LEGO Movie 2 isn’t the film most people waited five years for; however, it is a wonderful little film on its own terms. Even the elements of the film that seemed most nakedly pandering and corporately decided, like the musical numbers (did I forget to mention this is a musical?), work within the context and themes of the film. Of course, it’s a pop-musical—the boy’s sister is a teenage girl who loves pop-music, glitter, and pastel colors. That’s the kind of world she would create and the new worlds the movie conjures work perfectly in the story without feeling forced or unnatural. I walked out of the movie humming the tackiest and nakedly catchy pop-song I’ve heard in years and I was totally happy with that because the movie made me feel happy. Sadly, this will be the last time we hear from Lord and Miller for a while, as they’re currently underway with directing the adaptation of Andy Weir’s second novel Artemis. It’s unclear if or when they’ll return to the LEGO franchise, but given how utterly successful this franchise has been for Warner Brothers, I’d be hard pressed to assume they aren’t barreling trucks of money to Lord and Miller to script the third film immediately should they decide to do so. In any case, Lord and Miller have an exciting future career ahead of them.

The LEGO Movie 2 isn't perfect, but it's a very good follow up to the first masterpiece that was the original film. It injects new life into the amazing lead characters and expands on the themes of that movie intelligently in a new direction.