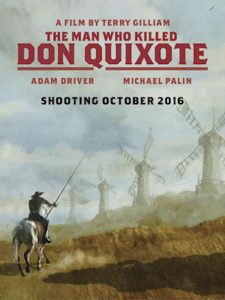 In 1989, Terry Gilliam, acclaimed director of Monty Python and the Holy Grail, Time Bandits, Brazil, The Fisher King, 12 Monkeys, and Fear and Loathing in Los Vegas, began a personal journey to adapt one of his greatest artistic inspirations into a feature film. After dozens of false starts, legal red tape, actors dying and financial trouble, the legendary director finally accomplished telling the story he was struggling to tell. As commendable as that is, that’s functionally the only thing The Man Who Killed Don Quixote accomplishes…

Language/Crude Humor: Severe language throughout including f*** and s***.

Sexual Content: Several scenes of a man and woman embracing with the intent to become intimate.

Spiritual Content: Multiple characters are described as Christian and Muslim, some themes about religion.

Other Negative Content: Portrayal of abuse, trauma, power, and control. 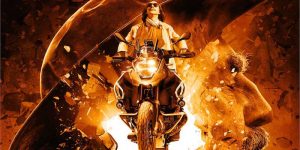 Last year I began a major effort by reading the entirety of Miguel De Cervantes’ critically acclaimed Spanish novel Don Quixote. I did so because I wanted to understand what made the novel so inspiring to two of my favorite filmmakers: Orson Welles and Terry Gilliam. It’s not a shallow undertaking. The print version of the book is 800-900 pages and most audiobook versions push upwards of 40 hours in length. It ended up being a three-month commitment. Yet at the end of it, I felt totally accomplished.

Don Quixote is one of the great works of western literature. It’s a story about delusion primarily but also a romantic story about the value of the stories we tell ourselves, the tragedy of reality, the absurdity of lies, and the cruelty of the powerful people who seek to use those lower than you as playthings. The wannabe knight errand, who has drowned himself in romantic literature until his mind dissolved, is left a delusional man roaming around post-medieval Europe in a fever dream. Yet the book doesn’t villainize him. The book starts by mocking him but quickly turns in his favor. It ends up being a surprisingly affirming story that does more than satirizing romanticism.

There is a reason great directors like Orson Welles and Terry Gilliam spent decades of their lives trying to direct adaptations of the book unsuccessfully. They saw themselves in the lead character’s journey, fellow madmen indulging in their delusions. For Gilliam specifically, the character is the crux of his entire ethos as a storyteller. Gilliam’s movies are all absurdity delusions. His movies are stories about the lies that people tell themselves and how trying to transcend the systems can make you go insane. That makes this in some ways a climax for Gilliam. He’s finally playing with the character that defines him most.

As documented in the excellent documentary Lost in La Mancha, his efforts at trying to start filmmaking an adaptation have floundered since the late 1990s. What was supposed to be one of the largest independently produced feature films in European history turned into a disaster. Production issues plagued the daily filming, the lead actor fell ill and dropped out of production, Gilliam lost the rights of the film to the insurance company, and every attempt to shoot the film since then up until 2016 crashed and burned. 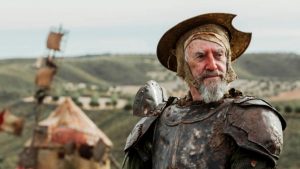 It’s a minor miracle that the film has been completed at all. Initially, the production was going to be financed and distributed by Amazon Studios. Unfortunately, the studio dropped out following legal troubles the film faced prior to its world premiere at the Cannes Film Festival. It took nearly a full year to get the film distributed since then. Alas, this larger release was a one-night-only screening through Fathom Events. It’s a bit of a whimper for a story that took so long to get to theaters in the first place. What’s sadder is that the movie isn’t much to write home about.

It’s clear that this version of the story is a very different version than the original Johnny Depp/Jean Rochefort version we saw in the few surviving shots from Lost in La Mancha. The script of that version of the film was supposedly borrowing elements from Mark Twain’s A Connecticut Yankee in King Arthur’s Court, mainly the plot element of modern man time traveling back in time. This new version starring Adam Driver (Star Wars, Logan Lucky, Blackkklansman) and Jonathon Pryce (Brazil) removes the time travel all together in exchange for a series of flashbacks that introduce us to Toby, a bored and uninspired filmmaker riding to success in a career as an advertising director. While shooting an insurance commercial in Spain, he accidentally finds himself in a small Spanish town where he shot his first student film a decade prior. There he comes face to face with the actor who played the titular Don Quixote in his film who has gone mad and convinced himself that he is, in fact, the famous character from the book.

The setup for the story is quite amusing and draws upon the Don Quixote story in fun aways. To my knowledge, there haven’t been many straight adaptions of the story without a gimmick given that his book is too long to adapt normally. He’s also a uniquely complicated character with a long story setup and whose empathy is often found over the course of long stretches of the story as we see him interact with other characters and get taken advantage of. Films have to truncate this down into something immediate and there aren’t many directors with the kind of ability to do that. Most just adapt the infamous windmill scene and play up the character’s absurdity.

Given that, the movie’s approach to adapting the story is both creative and underwhelming. The movie is problematically rather aimless. There isn’t a strong story foundation to plant most of the events of the story in. We come to find Don Quixote to be an empathetic and layered character by the end of the story but it takes a long time to get to that point. Functionally speaking, the primary issue of the story ends up being Toby’s story. He needed to more comprehensive character arc and unfortunately, his story is quite messy.

Really the best stuff in the film is performance related. Jonathon Pryce owns his performance as the wannabe knight errand who adds layers of gravitas, melancholy, and glee to a movie that struggles to maintain a solid direction. Adam Driver similarly owns his role. As the main character, the entire film follows his effective “arc” going from a bored filmmaker to a madman. His willingness to embrace the weirdness and range of the performance ends up being the driving force for most of the film’s best scenes. Unfortunately his joke one-liner of “there’s a plot?” ends up being sadly descriptive. That said it may play Gilliam’s intentions a little on the nose.

Of all the films I can think of that this reminds me of, the most immediate comparison is Glass from earlier this year. That movie was a contrived, messy, egotistical movie about contrived, messy, egotistical characters. The same is true of The Man Who Killed Don Quixote. Are the structure and surreal imagery intended to be the reflections of a character being slowly dragged into madness? I would bet that’s likely but like Glass, the problems are indistinguishable from normal storytelling issues.

Functionally the easiest way I can describe the movie is this: If you’re not a fan of Terry Gilliam or you’re not familiar with Don Quixote as a literary character than you won’t get much out of this movie. As someone who likes and embraces both Gilliam and classical literature, I can groove on the allusions to the book and the absurd, surreal tone and style that went into making the film. If you’re not familiar with the director, the character or the immense amount of effort that went into producing this film though I cannot imagine you’d enjoy it. The Man Who Killed Don Quixote is a sad disappointment as a film. I’m happy it’s finished and that he’s finally had the chance to tell this story and move on. Unfortunately, most stories that go through development hell rarely recover. They become unfocused and lose sight of their intentions. That’s, unfortunately, the case here. 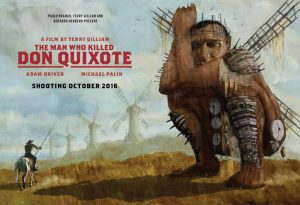 Fans of Terry Gilliam, Lost in La Mancha and Don Quixote may get something out of this amusing if confusing comedy but beyond that crowd, this movie offers few benefits.