Thomas awakens in an elevator remembering nothing of who he is or how he got there. When the elevator reaches the top, fifty boys who have learned to survive in an enclosed environment within a massive maze greet him. They have been trapped within the maze with new boys arriving every month for three years, determined to escape, but now that Thomas has arrived things begins to change. Horrible creatures are coming out in the day instead of just the night. A comatose girl arrives in the elevator. But now they may actually have a chance of leaving.

Maze Runner fans have long awaited a Maze Runner movie since rumors floated around a year or so after the book’s release in 2007. I have been a fan of the book since then and I believed that the Maze Runner movie rumors would turn out to be false like with Maximum Ride. Earlier this year I found out that an actual Maze Runner movie was coming out and I flipped out. I saw the film at the “Midnight” showing (apparently they’re now doing them at 8pm and 10pm) and now I bring you my review.

I’ll say this first so any Maze Runner fans can breathe: The movie is loyal to book. There have been some tweaks, but I believe they helped the story.

The characters are one of the three biggest attractions to the series. One thing I’ve especially enjoyed about the film is the fact they gave more depth to the characters than in the book. The main character Thomas is caring, brave, compassionate, diligent, sacrificial and curious and grows into an amazing character as the film goes despite his lost memory. Dylan O’Brian is perfect for the role. I can’t picture anyone else playing him. Theresa couldn’t have been done better also. She looks and acts exactly like she did in the book.

Other main characters such as Alby, Minho, Newt, Gally and Frypan were also given more uniqueness and definition as characters. Chuck is pretty much the same. He didn’t need any tweaking. All of them were casted well except perhaps Winston. He wasn’t how I pictured him. Gally had the best development in the movie. The moviemakers gave him more importance and I like that, but it’s mostly spoilers so I’ll keep it hush-hush. In the film, the Gladers are given a sense of comradery. They’ve been their together for years and they’ve become like brothers. I felt like they were more distanced in the book and I enjoyed this take better.

Costumes were done well. The Gladers had a rough farmboy/tribe warrior look. They’re fifty sweaty, dirty boys running around in modern clothing mixed with harnesses and belts and rusty weapons and wooden spear they put to together. It was a really interesting mix since the author didn’t put too much detail in the clothes. But hey. Boys don’t necessarily notice clothes all that much.

Another attraction to the books is the amazing world building. Everyone says the classic Glader slang: shank, slinthead, shuckface, klunk, greenie, ect. The Glade of the film has both similarities and differences to the Glade of the novel. I liked the changes, though, and I understand why the designers made the call. The Maze is stone covered in ivy, just like in the books. The grassy areas and the Deadheads (a wooded area within the Glade) are the way there were described as well. But many of the structures are different. The designers gave the Glade a more tribal look, which makes a lot of sense if you think about it. We are talking about a group of teens who have created a society from what was already in the Glade and meager supplies the Creators provide them. The buildings are built from wood, and the Gladers mostly sleep in hammocks. They also drink from jars instead of glasses, which I thought was a nice touch. I love the plot. It’s the key driving force to the book as well as the movie. It’s so wild and mysterious that you’re just hungry to see what happens. The film stays true to the book and ends how it’s supposed to. Some of the scenes have been rearranged or condensed for pacing reasons, but are still there. I feel like the new arrangement helped the story flow better. The movie is very fast-paced, even more so than the book, and keeps you on the edge of your seat nearly the entire time. They added a few scenes (which I read in the fan interwebs that people were scared about, *cough, cough* I among them.), but the scenes actually work very well into the story and don’t hurt it. Many themes of endurance, sacrifice, brotherhood, courage and love were woven in.

Finally the effects and soundtrack were very good. The grievers (evil monsters) were definitely scary just like in the books. The soundtrack was so good I bought it and I only spend my money on the best soundtracks. It’s very moving and has brought me to tears.

Violence/Scary Images: There are two spots near the end with a bit of blood. Some of the characters are stabbed by spikes from the grievers and one character is speared. Some bones are spread around an area called the Deadheads. The largest bit of gore occurs when a Griever had been crushed in between two walls, so some of its innards are on the ground. The characters do rip one of its legs off while trying to get it out from in between the walls, but it looked no worse than ripping off a spider’s leg. Throughout the movie there’s a lot of intense action between the grievers and boys and some scary parts where the grievers are searching for them.

The Changing, which happens when someone is stung by a Griever, is a little frightening since the victims get veins across their skin and their eyes turn dark. The Grievers are scary since they’re big, crawly creatures with no eyes and big scorpion tails (contrary to the books unfortunately). Near the end of the movie you get a glimpse of a Crank (a disease infected human) and he is frightening since he pops up with no warning.

Language/Crude Humor: There is some swearing that wasn’t in the book. The swearing is brief and not too frequent, but whe words included are a**, d***, sh** and h***. The only other crude thing I saw is a fart-like noise at one point when the boys are investigating a dead griever. Also the boys call each other slang names which are sometimes endearing and other times insulting. 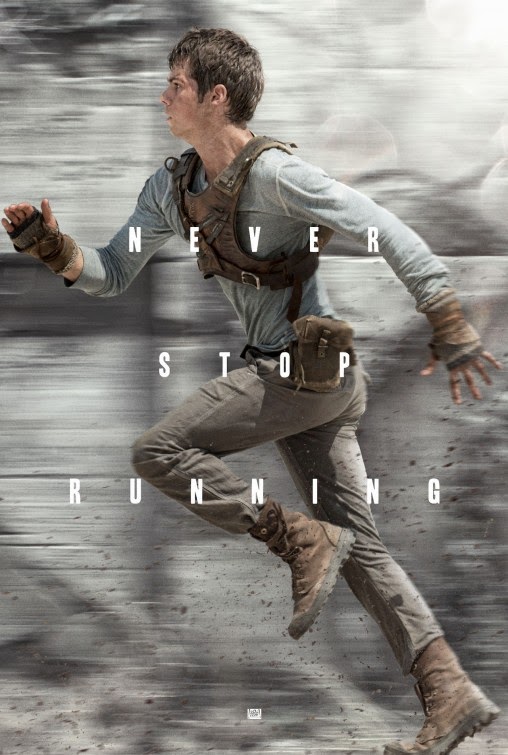 Sexual Content: None really. There is some chemistry between Theresa and Thomas, but no kissing.

Drug/Alcohol Reference: At one point the boys are having a celebration and Newt has a drink he calls “Gally’s Special Drink” and it doesn’t taste good to Thomas. This may be alcohol, but it isn’t confirmed.

Other Negative Content: *This section will be spoiler riddled* Unfortunately a couple things didn’t make it into the movie or were changed in a not so good way. The two biggest to me were the design of the grievers was very much changed and they left out Thomas and Theresa’s telepathy. A few scenes were taken out, but nothing too major. The Griever Hole design is changed but still there. The Beetle Blades were not included though they seemed to give tribute by calling a certain type of rotating wall “Blades”. Near the beginning the boys burn a pyre with a strange arrangement of a skeleton. It seemed a bit ritualistic though it was never expanded on and it was not in the book. *END OF SPOILERS*

Despite some of the changes, I really enjoyed the film. The moviemakers kept the soul of the book intact. Existing fans will be satisfied. While watching the film I laughed frequently, almost cried even more, and my heart raced nearly the whole time. My verdict: Go see it.

-Minor diversions from the book -Some swearing -Scary images

The Maze Runner is a story of a group of boys that want to go home even if they don’t remember where it is. They will fight against all obstacles and even sacrifice themselves if it means their friends will get there. This film is very loyal to the book and will keep you on your toes. It’s an amazing story and definitely should be added to your to watch list.