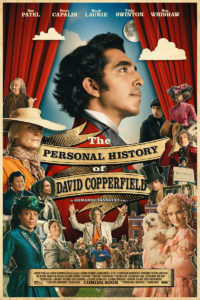 Armando Iannucci (VEEP) hadn’t been a director on my radar prior to the Spring of 2018, when his underrated dark-comedy The Death of Stalin was released upon an unsuspecting (and uninterested) public. As one of the few Americans who actually saw it in theaters, it was a revelation. It immediately became one of my favorite comedies of all time! Suddenly this new, talented comedic director was now my most anticipated filmmaker as I was eager to watch his upcoming projects. Two years later, his newest comedy has reached American theaters this weekend!

Violence/Scary Images: Characters are beaten, get in street brawls and bleed.
Language/Crude Humor: Mild to no serious language.
Drug/Alcohol References: Characters get drunk in one scene and make fools of themselves.
Sexual Content: Mild to no sexual content.
Spiritual Content: Most of the characters are implicitly Christian.
Other Negative Content: None.
Positive Content: Themes of growth, maturity, love and coming of age. 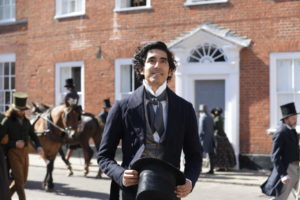 I must plead forgiveness from literary purists before I begin. I haven’t read Charles Dickens’ David Copperfield before seeing this adaptation. I have no means to address the book as an adaptation at the moment. As such, I can’t help but feel a bit of this movie’s cleverness is lost on me. David Copperfield is an absolutely massive 768-page novel. Translating such an immense story into a two-hour comedy is an immense task. I’m not exactly sure if I think he succeeded in his task.

As Will Lloyd wrote for The Spectator, “Iannucci and his regular cowriter Simon Blackwell rip the guts out of the book and do their best to save the spine… Iannucci and Blackwell take a chainsaw and ax to this Gothic edifice. Hacking and cutting, they rearrange the surviving blocks into a tight, snappy, upbeat romp that resembles David Copperfield in the same way that an egg resembles a chicken.”

Alas, I’m not prepared to parse the details of the book. I’m only here to look at The Personal History of David Copperfield as a stand-alone film. For what it’s worth, it’s fascinating. It’s a tremendously uneven film that rushes through large segments of its characters’ lives at a breakneck pace but in its quieter moments it’s an emotionally drawn, deeply ambitious work of filmmaking that’s trying to bring the elements its director is clearly most inspired by in the book. Unfortunately, that purpose is somewhat obscured in execution as the process of making the story work in an abridged form may not have totally succeeded. 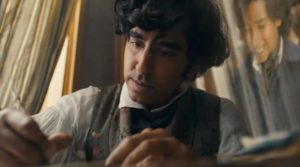 The Personal History or David Copperfield covers a long biography of one man’s life journey growing up in England during the Victorian era. He’s orphaned by his family following his mother’s remarriage, is adopted into his estranged Aunt’s family, falls in love with two different women, begins a late-career as a writer, and goes on various misadventures which eventually end up inspiring his writing career. The stories vacillate between darkly tragic and lightly humorous. Given the director’s background in comedy, it’s not surprising the film would gravitate towards some of the more lighthearted aspects of the character.

The movie never fully delves into comedy though. It actually took a while before the movie started getting regular laughs out of me. It started winning me over when Peter Capaldi shows up as the wacky Mr. Micawber. While he doesn’t end up being a character who stays around for the entire film (he comes and goes), Capaldi’s performance was wonderful. He’s funny, sneaky and loving all at once playing a poor man constantly dodging tax collectors on the streets of London. Coming after the film’s drawn-out and emotionally taxing opening scenes, this was a relief. The movie finally seemed to be developing a sense of humor and identity that it continued to develop with Tilda Swinton, Hugh Laurie and Morfydd Clark’s characters. They’re all bizarre yet well-defined and lovable! At that point, I knew I was invested in where the film was taking me. 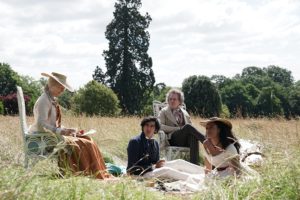 Part of the interesting ideas in the film comes in how David’s future recollections of the events inform his adult life and how’s he’s able to tell his life stories in ways that allow him to enthrall others or sell his stories for money. Much of the actual process of him developing his writing is left out as well as seeing his efforts to pitch the books. We see him in one scene writing, and then in another scene we’re told he’s now a fabulously rich author. I get the sense these ideas of recontextualizing your past and using it to build yourself up in the future being an important theme in the book, but here they play out in five minutes of the film’s two-hour runtime.

At times you can really see where the book was trimmed the make the plot functional for the movie. Especially towards the end, story arcs are abruptly cut off, resolved in a quick scene of comedy or written off. At one point in the film, a character asks to be written out of the plot of one of his stories. Ironically this is the last time we see her in the film. She literally writes herself out of the films ending. The movie is filled with band-aid solutions like this to resolve entire characters and stories. At times they almost feel clever enough to work but in others they feel off. 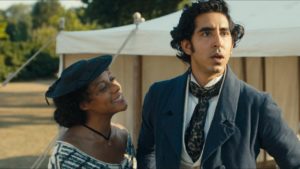 As a thoroughly modern adaptation of the book, the film approaches the story with a distinct vision for diverse color-blind casting. Despite being set in Victorian England, characters in the film are cast by actors of every race. At times this leads to oddities like an Asian man introducing his Black daughter to the lead character. I also can’t say how much it changes the implied subtext of the film’s story given that the races of the characters are never acknowledged. You get the sense throughout the film that the characters are being loved or hated because of the cruelness or gentleness of the characters more so than any implicit racial prejudice.

It’s such a squeaky clean depiction that it obscures any implicit point it might be trying to make if the thought process went deeper than merely trying to have a diverse cast for the sake of having a diverse cast. I don’t imagine Victorian England would’ve been this accepting of racial minorities, sadly. It feels like a decision made more to satiate modern sensibilities than to highlight a point about the arbitrariness of race or the role of different races in English history. Still, it’s hard to argue with the results. Dev Patel is a great leading man and brings a lot of energy and confidence to the titular character of David Copperfield. He manages to do a great job grounding a film that occasionally feels like it’s spinning out of control. 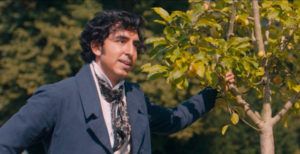 I don’t think a novel like David Copperfield is likely ever going to be made into a great film based on its length and thematic density, unless you have a great director like Greta Gerwig or Peter Jackson at the helm deftly adapting the material. Even then, it would be a career-defining challenge. This adaptation is admirable though for the way it tries to distill the material. The movie’s final scene does a decent job summarizing what I think Iannucci personally gets out of the novel. To him, David Copperfield seems to be a story about earning a happy life. The story takes a character growing up in deeply tragic circumstances and slowly builds him up through family, work, and love into a fully functioning adult capable of looking back on the past as a distant memory. It’s a fairly warm coming-of-age story in that regard. Even if it doesn’t totally stick the landing, I admire the film’s ambition regardless!

+ Great performances by a diverse cast of actors.
+ A deeply ambitious script.
+ Some good comedic scenes and jokes.

- Rushed character arcs and story resolutions.
- Disparate tone that waffles between dark and comedic, never fully delivering on either.

The Personal History of David Copperfield is a fascinating adaptation. It's the kind of movie where you can tell it's a deeply personal passion project for the people involved but the full breadth of the film didn't quite reach the levels of its creator's vision. On its own, it's quite an admirable if strange and slow-paced comedy!