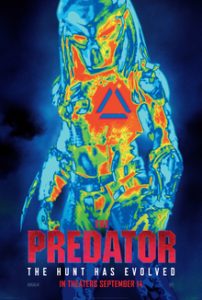 The original 1987 Predator is a classic of 80s action filmmaking. While the monster has appeared in numerous sequels, spin-offs, and video games there really has never been a proper full-blown sequel to the original film that’s managed to repeat what that film was able to accomplish. With this sequel, the director of The Nice Guys and Iron Man 3 gives it his best shot at attempting to revitalize a franchise he once acted in.

Violence/Scary Images: Significant and comical violence throughout. Characters are brutally shot, slashed, stabbed, impaled and ripped apart. Tremendous amounts of blood are shown. It’s not played to be horrifying as most of the gore is CGI and mildly comical and over the top.

Language/Crude Humor: Significant language throughout. One character has Tourette’s Syndrome and drops swear words like f*** and p**** constantly.

Sexual Content: Some sexual references made, none are depicted.

Spiritual Content: One character is religious and references to the Bible and God frequently.

Other Negative Content: Characters die brutally, most of them are unredeemable murderers and felons.

Positive Content: Characters sacrifice for each other and fight for the cause of protecting humanity. 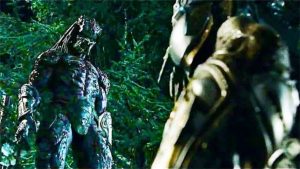 The Predator franchise has never truly been able to find its footing in the realm of sequels. The first film is a masterpiece of action filmmaking. Predator is a primal, brutal, and animalistic exploration of conflict and honor led by one of Arnold Schwarzenegger’s best performances. It’s one of the pillars of 1980s action fair on par with the best of films like Die Hard and Terminator. Strangely the franchise has never been able to repeat the success of that original film. Unlike its compatriot series Alien, the franchise never really figured out how to expand its concepts outward and tell an original story again. With that franchise, James Cameron was able to figure out how to rework Ridley Scott’s original tense atmospheric suspense thriller into a completely different genre of filmmaking that built off of and expanded the original concept with Aliens.

Maybe the reason none of the Predator sequels has managed to work out well is that they’ve been consistently circling the drain. Predator 2 tried to play with the idea of transitioning the concept of the original film into a new setting and exploring how a completely different set of characters would grapple with the same menace. What resulted was a bizarre, brutal, and tone-deaf blockbuster most remembered for that cameo by the xenomorph skull in the background of the final action setpiece.

Predators worked a great deal better and came the closest with it’s slick, small-scale action harkening back to the original film and giving us some additional world-building concepts to chew on. The film, unfortunately, functions as a grosser, more exploitative companion piece than a proper sequel. It ends on an obvious sequel bait moment that does little to resolve the interesting ideas the film had set up and due to marginal financial performance, it never got that sequel. The film’s setting also leaves room to be desired as it ultimately proves inconsequential to the timeline of any future movies. Then, of course, there are the two largely disregarded spin-off films Alien vs. Predator and its sequel Aliens vs. Predator Requiem. I haven’t seen either but they aren’t widely regarded films.

When Shane Black was announced as the director of the fourth canonical film in the series I was ecstatic. Black is one of the great underrated modern directors working in Hollywood today. His directorial debut Kiss Kiss, Bang Bang in 2005 marked the first film in Robert Downey Jr.’s nascent career resurgence which was followed in time with the actor and director pairing up again on the hotly debated Iron Man 3. Most recently Black birthed The Nice Guys into the world. The slick, old school action-comedy married the best of Black’s tendencies and loves as a screenwriter with his unique style and sense of humor in one of the best comedy films in years. It was like the best works of Raymond Chandler, Walter Hill, and Joss Whedon baked together into one piece of cinema.

Lest we forget his excellent screenwriting helped him break into Hollywood and set loose some of the most distinct action-comedies of the 1990s like Lethal Weapon, Monster Squad, The Last Boy Scout, and Last Action Hero. For good measure, he was also close to John McTiernan during his golden years, helped work conceptually on films like Die Hard and had a starring role in the original Predator. Needless to say, he’s been around the block.

It was easy to get excited with such a distinct and intelligent voice behind the camera for the first time in a long time. Robert Rodriguez is certainly a unique voice but the series hadn’t experienced a major talent taking the helm of the franchise since the first film. With Shane Black at the helm, one would expect something funny, gory, insightful, and something that could totally resurge the fledgling franchise. Thankfully, The Predator does bring some needed ambition and energy to the table. The movie is relatively engaging in its own right and brings enough over the top content to keep the audience from drifting. It’s a veritable splatterfest of an action movie that puts the gore and violence first to a hilarious degree. That being said the film is a complete mess. It’s a thematically muddled and listless film with an unclear sense of direction and a sociopathic disregard for death and character motivations. This is so at odds with the kinds of stories Black has told before.

Prior to now Iron Man 3 is the most outlandish project he’s worked on but that film was scaled back by the standards of bombastic superhero films. Shane Black’s usual voice is much weaker here than in his other work. His work outside of this is otherwise mostly character-centric but here all the characters exist to get dragged along a roller coaster. They don’t grow or make meaningful decisions that affect the plot. Without spoiling the only character in the movie with actual motivations and desires is one of the Predators and what we come to understand about him is both entirely at odds with the other Predators we’ve seen on screen and isn’t supported by the amount of senseless murder he performs.

The film still feels like it’s coming from Black’s voice with all of the snappy comedic one-liners and jokes. Still, what the film says with that voice is incoherent. There is no functional storytelling going on with these characters. Characters are introduced with simple setups but the logical steps of their stories are immediately thrown out in favor of a stripped-down adventure story was the boilerplate characters get into boilerplate conflicts and everyone gets tugged around in the storytelling equivalent of tying people to the back of a car and dragging them along behind.

What’s most frustrating to me is Black misunderstands one of the most interesting things about the Predator as a monster. The Predator isn’t merely a globe-trotting conquerer (Independence Day) or some parasite attempting to consume life (Alien, The Thing). The Predator is just a hunter. Predators don’t put much care into human beings as much more than target practice. They’re a species that regularly hunts Xenomorphs and other species across the universe. The most they’ll ever go out of their way to do is kidnap dangerous humans and stick them in game preserves to play with at their leisure. With The Predator, Shane Black fundamentally misreads the central motivational drive of the creatures and hints at a grand Predator conspiracy to eventually conquer the Earth in what turns out to be an overextended metaphor for cataclysmic climate change (really….).

This isn’t a well thought out movie.

The sad thing is that with the last film in the series Predators the movie seemed to suggest that the series was going in to move into a direction where we would get to learn more about Predator society, classism, and conceptions of honor. As a science fiction movie, there’s so much interesting thematic territory you can explore about society with a species like this where human concepts like honor and merit are elevated to such a horrific and destructive degree. There’s plenty of room for satire and creative storytelling. Unfortunately with this film, Black goes for something cheap and easy.

I’m not sure what the actual intent of this film is. It’s possible that this was a money job for Shane Black after the financial losses of The Nice Guys. It could be he truly wanted to explore the movie that helped launch his career and considered this to be a life coming full circle. Maybe the 20th Century Fox reshoots mutilated the finished product and this version of the film is merely extremely compromised. If that is the case I’d like to see what kind of directors cut of this film could exist. We likely won’t know for a long time. In its current state, however, The Predator is the wrong film for this time. The franchise needs to expand its themes outward and built the species into something completely new and terrifying. Instead, it picks lukewarm directions to take the series, sets up an obvious sequel and tries to pacify the audience with gratuitous gore. This is a poor way to follow up the original classic and I’m not excited for where this series is going.

Even one of the strongest storytellers in Hollywood couldn't save the bloated Predator sequel from falling prey to terrible problems. While the action can be fun and distracting the film's content is ultimately little more than distracting.