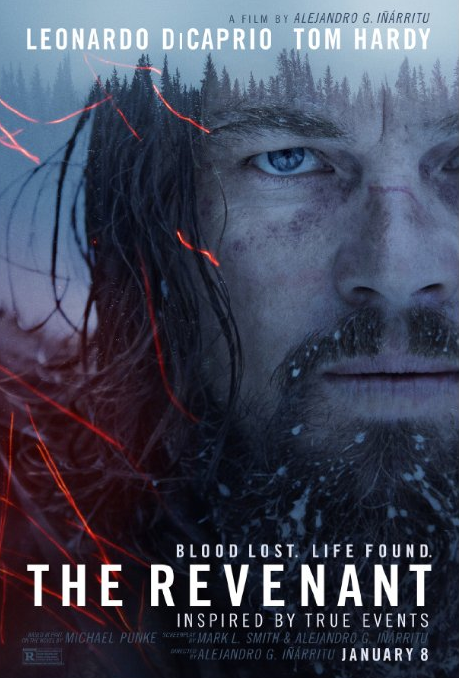 When the first previews came out for The Revenant, many people predicted that it would be a great film, if not a Best Picture candidate. Leonardo DiCaprio, Tom Hardy, and a bear? C’mon, that’s a recipe for success and everyone knows it. But I didn’t want to just give it a high score because it was supposed to be good. I decided to go in clean, without expectations or prior opinions, and give the movie a chance to impress me based on its own merits. Had I any expectations, the Revenant would have surpassed them.

Most every part of this film has stayed with me as I write this, from DiCaprio’s tour de force performance to the simple yet stirring score. There are a lot of films over two and a half hours that I enjoy: Interstellar, The Dark Knight, all of the films in The Lord of The Rings trilogy. But I don’t know that I’ve ever been so ready to see a long film again as I have with this movie. If you’re looking to spend your twelve bucks on a cinematic experience, then look no further.

While traveling with a company of American fur trappers in 1823, experienced frontiersman Hugh Glass (Leonardo DiCaprio) sustains would-be mortal wounds from a brutal bear attack. Unable to continue to care for him, his hunting team leaves him for dead. Alive and kicking against all odds, Glass must battle the wilderness as he makes his epic trek back to civilization, hunting John Fitzgerald (Tom Hardy), the man who betrayed and abandoned him. 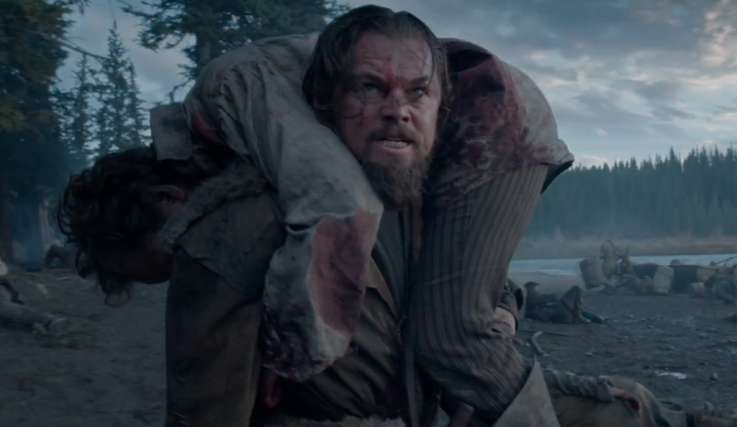 Violence: This film does not pull any punches. It’s man versus nature, and nature fights dirty. People are killed with arrows and guns in a brutal fashion, and you can expect blood, intestines, festering wounds, and everything else you need for a good party. None of the gruesome moments feel unnecessary, but that didn’t stop me from cringing a bit on more than one occasion.

Language: An R rating comes with as many swear words as your heart desires. Despite this, there really weren’t many instances of curse words, but who has time to curse when there’s a bear on you?

Sexual Content: There is a very short rape scene that kind of took me by surprise. Not graphic.

Drug/Alcohol Use: None of note.

Positive Content: There’s a Biblical message at the end if you squint real hard.

Let’s just do the bad stuff first. Our tale opens in a bit of a surreal manner, with a dream sequence/ flashback that shows how Glass came to be with alone with his son. This is the first of a number of dream sequences that have an ethereal quality. To be honest, these are my least favorite parts of the film. The intent is to be high-concept and art-house style, but that does not really lend itself to the story being told, and falls a little flat. They aren’t bad, per-say, but misplaced.

Luckily, these scenes are few and far between. Also, the plot isn’t the most complex of narratives. It’s a study in the will to survive ensconced in a simple revenge story. The movie is so effective at what it does that I do not cry for the plot. But still, because of this, the ending is, though intense, a bit anticlimactic. It’s still a journey worth taking, but if you’re looking for more story to fit the storytelling, you may be slightly disappointed.

The scene after the dream sequence is far more representative of the film. While Glass and his half Native American son, Hawk (Forrest Goodluck), are hunting, the trappers’ camp is attacked by a Pawnee raiding party. This is a stunning, visceral scene reminiscent of something out of Saving Private Ryan. The scene is a single, sweeping shot stringing together brutal instance of frontier murder. It’s heart pounding action artfully done, and it sets the appropriate tone of unforgiving harshness that pervades the remainder of the film. 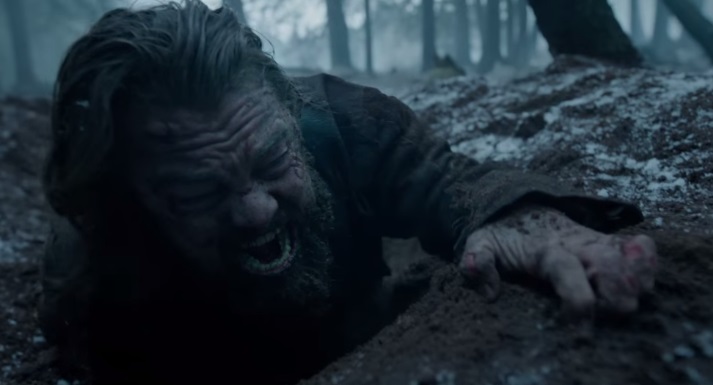 One of the great things about the Revenant is that it seems to not go out of its way to be gritty. It simply presents events as they would occur in the real world, rather than toning it down to make it palatable as most movies do. The infamous bear scene plays more like a documentary than an action film, a one-shot devoid of music with the only sounds being the bear’s roars and Glass’s cries. It’s intense and gritty and raw, a microcosm of the film.

If Leo doesn’t win Best Actor for his performance here, then it’s time for us to start seriously considering conspiracy theories. There’s almost no contest. Despite the fact that he probably has the fewest peaking lines of any of the film’s main characters, he manages to put on a heart-wrenching show. The emotion conveyed through his eyes, through his desperate cries, and through his grunts of pain, all serve better than words could.

There’s a scene near the end of the first act in which Glass witnesses a tragedy, but, still recovering from his wounds, is unable to speak or move, let alone take action. He can only make guttural noises. The pain that Leo shows through only his eyes and grunts as he watches his world slip away in front of him is absolutely heartbreaking. He spends the rest of the film hellbent on only survival and revenge, and it shows.

As he drags himself up out of the muck, treats his own wounds, and embarks on his odyssey, we are taken on a journey of incredible strength and resolve. If you’re worried that Dicaprio might come off as just Leo in the woods, then let me assuage your fears. In The Revenant, there is only Hugh Glass, the man who returned from death.

If Tom Hardy’s role wasn’t going to be up for Supporting Actor, then Leo would have some serious competition from within his own movie. The fact that this is the same guy who played Bane and Mad Max is just astounding. He’s got a perfect frontier accent and is convincingly slimy and just the right amount of sinister. His role had the danger of venturing into the cartoonish, but he remains believable as a man who is just looking out for number one.

The other supporting actors do excellent jobs as well. Domhnall Gleeson as Captain Henry is very good as an inexperienced leader trying to figure out what the right thing to do is. His moments of anger near the end particularly stand out. The surprise here comes from Will Poulter, who plays Bridger, a teenager along on the expedition who is sucked into Fitzgerald’s machinations. He plays the role very well, split between a naive pursuit of honor and fear of Fitzgerald. You might remember him as the fake son from We’re The Millers. 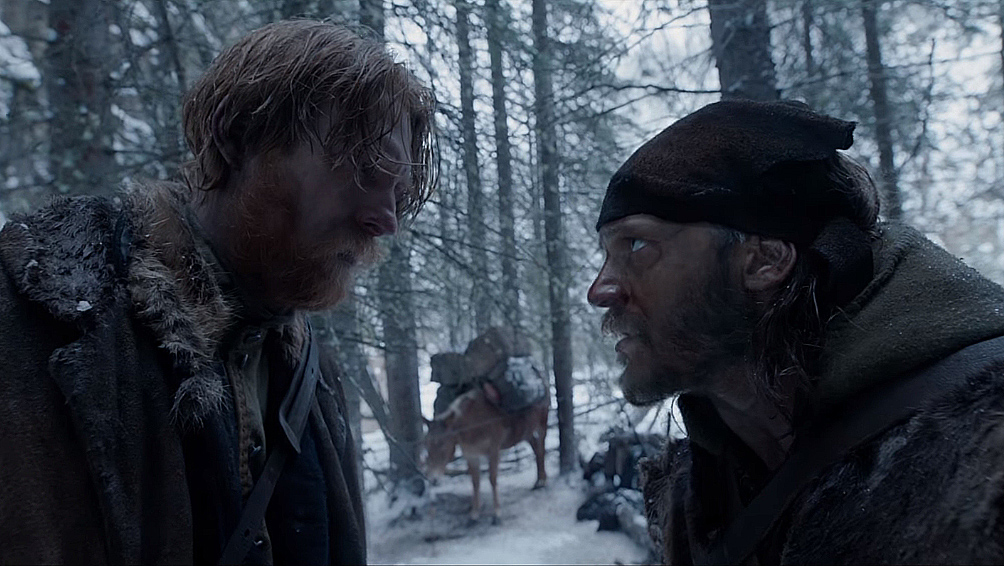 What might set this film apart besides the Oscar-worthy performances from DiCaprio and Hardy is the incredible cinematography by Emmanuel Lubezki. In spite of a lack of fantastical elements, this is without a doubt one of the most visually stunning films I’ve ever seen. The film doesn’t resort to quick cuts or frenetic movement for its action. The camera moves fluidly in both the calm moments and the intense. Every shot of nature, from waterfalls to snowy mountains to roaming buffalo, is stirring, and will stay with you after you leave the theater. This is a masterful work that needs to be seen on a big screen. It’s a film that’s simultaneously beautiful and gross, painstakingly crafted and raw. It’s a feast for the eyes in all its rough, crude glory.

Save for a few select scenes, the score consists solely of a few low notes on the cello, and it is absolutely beautiful, the perfect accompaniment to Lubezki’s breathtaking camera work. Simplicity works in this film’s favor, and fits right in with its raw tone. The film does not need to rely on music to stir up feelings, but it works just the same. The soundtrack is definitely worth listening to again and again. 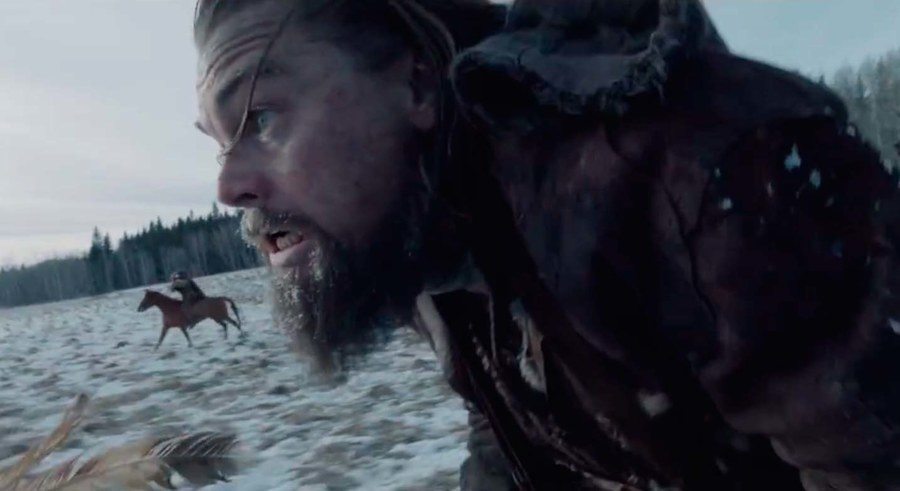 Despite its problems, this is a triumph of film-making. I will be shocked if Leo does not finally get his Oscar, and I’m betting on a Best Cinematography for the film and a Best Supporting Actor for Tom Hardy, as well as at least a nomination for Best Picture. You should see this movie. You might need to look away at some parts, but you should see it. It’s a powerful tale of what the will to survive can carry a person through, as well as a showcase for the different kinds of artistic talent necessary to make a brilliant film.

+ Incredible Performances + Beautiful Cinematography + Doesn't Hold Back + Stays With You

While not without its flaws, The Revenant is a masterful piece of cinema, sure to do very well at the Academy Awards, and deservedly so. Beautiful and well-crafted, yet gritty and raw, this film with stay with you long after you leave the theater.