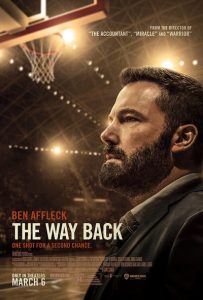 Director Gavin O’Connor has built his career and his best films around the drama of people whose lives are dedicated to sports. His best films, like Miracle and Warrior, center their drama on how characters use sports to improve themselves or make a statement. With his newest Ben Affleck-led film, The Way Back, he tells the story of how one man comes to terms with his alcoholism by becoming a high school basketball coach.

Violence/Scary Images: Some minor brawling. There’s a car accident. A character tumbles down a hill.
Language/Crude Humor: Severe language throughout including f*** and s***.
Drug/Alcohol References: The main character is an alcoholic who consumes enormous quantities of beer. He also smokes.
Sexual Content: Noting depicted. Crude discussion of sex at a bar.
Spiritual Content: The character is a teacher at a Catholic school and are implicitly Catholic or ex-Catholic.
Other Negative Content: Excessive depiction of alcoholism and a lack of rage control.
Positive Content: Themes of emotional growth, coming to terms with past trauma, and seeking emotional health. 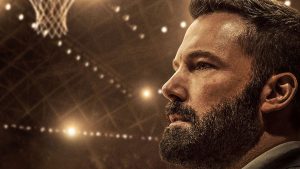 Jack Cunningham has had a rough life. After growing up with an estranged relationship with his father, he abandoned a basketball scholarship, lost his child to cancer, and divorced his wife. When we meet him in the story, Jack is a construction worker whose best days are behind him, filling his terrible evenings in by drinking excessively.

In one of the film’s earliest scenes, he spends an evening debating how to turn down a job offer and downs over two dozen beers. Jack is an alcoholic. He can’t even go for a car ride without cracking a beer. Against his initial inclinations, Jack takes up the job offer he spent an entire evening debating how to turn down. He decides to return to the Catholic school where he gained his reputation as one of the school’s best varsity basketball players in order to coach.

The Way Back is a heavy movie. Any movie that begins with a character in a state of such utter despondency that he does nothing but drink isn’t setting itself up as a terribly happy story. It is however a solid sports movie with a redemptive drama at its core. As such, despite relatively falling under the radar, it’s quietly developed a reputation as one of the better films to have been released so far this year. 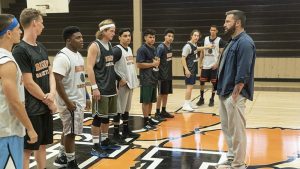 I should say that I don’t particularly care for sports. There are sports movies I like such as Draft Day, Million Dollar Baby and Cinderella Man, but the sporting aspects of these films aren’t usually what I find most interesting about them. More often than not, an interesting sports movie is driven by the conflicts of the characters and how their sports careers affect their complicated lives. Thus why last year’s High Flying Bird left me kind of lost. I can understand a movie trying to explore the complex emotions of black college basketball players on strike but it loses its story in the minutia of basketball logistics.

Thankfully The Way Back is more of the former than the latter. I won’t say it’s the most engaging or emotionally wrenching exploration of these themes I’ve seen. Gavin O’Connor’s movies tend to leave me somewhat cold, as was the case with his conceptually amusing, if half-hearted, action film The Accountant. His 2004 Kurt Russell sports film, Miracle, did a great deal more for me if only because it carried some interesting Cold War history into its premise. While I can’t say The Way Back is the most intensely interesting sports movie I’ve seen, what we do get on screen is an engaging, dramatic film with a heavy atmosphere and strong performances all around.

As a story, alcoholism and basketball end up being good catalysts for what the story is really about: how Jack processes his depression. Is he going to bury his emotions and self destruct, or build new relationships with others and claw his way out of his own personal hell? Jack has spent his entire life basing his own identity and self-worth on other people’s willingness to love him and when they don’t show up, he shuts down. When his father only gave him attention in his adolescence for his basketball abilities, he realized his father would never truly love him for being himself. When he lost his child, he lost the one person in his life who would unconditionally love him no matter what. Alcohol seems to be his own coping mechanism and he downs beer intensely to bury his grief. 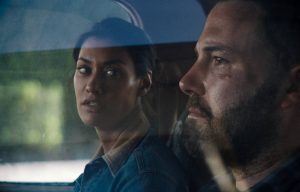 In a conversation early in the film, he finds himself on a bus with a priest who scolds him for his inability to reign in his language during a basketball game between two Catholic schools. Jack snidely responds that he doesn’t think God would “give a s***” what he has to say on the basketball court. The priest calls back that it doesn’t matter, because the point of his job is to help foster these teens into responsible young men. His temper quickly begins reflecting on the students who start screaming back at him, swearing and throwing basketballs.

As Jack learns to commit himself to the team, he begins to foster something great and he starts healing. He even starts drinking less as he becomes more emotionally invested in the team. While a great deal more happens by the conclusion of the film, the path he sets himself upon ends up being one of growing and developing into the ability to admit he isn’t okay. Only then is he capable of taking his first steps in his new life, and in doing so he proves to inspire the people around him to better themselves as well.

The Way Back can be a bit heavy and hard on the ears, but in rooting its story on one man coming to terms with his torment it does manage to develop into something mature and entertaining. I won’t call it a fun watch given the subject matter, but it is a film worth catching if you missed it during its theatrical run. For all its rough exterior, this is a movie that understands what it means to overcome extreme grief and build yourself into something better.

The Way Back is a quietly competent and engaging sports-drama that will likely appeal to viewers who didn't catch it during its theatrical run in March. While there's little here that hasn't been seen in other sports movies, what is presented is well done and engaging whether or not you enjoy basketball as a sport.