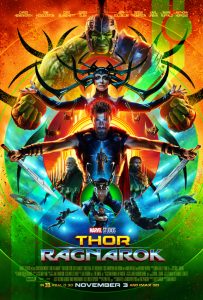 Thor is my personal favorite Marvel superhero, one of the main reasons being that he’s a Norse god. Throughout my life, I’ve heavily researched Norse mythology and I’ve enjoyed the plethora of references throughout the past two Thor films. This new film is now straying out of its quintessential fantasy genre and into science-fiction, which has caused quite a shift in the tone of the Thor movies. Is this a good shift or a bad shift?

Violence/Scary Images: A character is melted into a pile of blue goo, a character’s eye is slashed out leaving just a bloody socket, a character is bitten by a giant wolf, many characters are stabbed with swords, spears, and projectiles, and undead monsters are disemboweled.

Language/Crude Humor: Minor swears such as d***, sh**, and h*** were used sparingly. There are several jokes about a portal that is nicknamed “the Devil’s Anus.”

Sexual Content: Thor is shown shirtless at one point (like he is in every movie he’s in) and the Hulk is always shirtless.

Drug/Alcohol Reference: Thor enjoys drinking and he drinks a large stein of ale. Valkyrie drinks to the point of intoxication on several occasions.

Positive Content: Forgiveness, inner strength, and the bond between brothers despite past hurts.

Since Age of Ultron, Thor (Chris Hemsworth) has sought out the Infinity Stones, but so far his search has been in vain so he has taken it upon himself to stop the monster Surtur (Clancy Brown) from causing Ragnarok, the Norse apocalypse. After defeating this monster, he returns home to find that Loki (Tom Hiddleston) has been disguising himself as Odin (Anthony Hopkins) and has banished his father to Earth. The brothers find Odin in Norway where the king speaks to them one last time before he passes on and seconds after Hela (Cate Blanchett), the Norse goddess of the dead walks out of a portal. She easily crushes Mjollnir and Thor calls for Heimdall (Idris Elba) to open the Bifrost. The Bifrost opens and takes Thor, Loki, and Hela up into the heavens. In the heat of battle, Hela pushes Thor and Loki out of the Bifrost’s pull. Thor lands on the planet Sakar and is promptly captured by a bounty hunter and given to the Grandmaster (Jeff Goldblum) as a gladiator. Now Thor seeks to defeat the champion so he may win his freedom and return to Asgard to save it from Hela.

Emotional tension is a massive driving force in a film. It’s what makes you care about the characters and empathize with them during their good and bad times. Comic relief is a storytelling tactic used to break up some of this emotional tension, so the readers aren’t overwhelmed, but I believe there’s a fine line between comic relief and just overdoing it. I understand Thor: Ragnarok is classified as a comedy, but I’ve never thought of the Thor films as comedies, so I was a bit shocked to see that as a genre on IMDB. From just the film’s opening, I could immediately feel this genre shift. This film did not have the reverence and seriousness as the past two films did. I didn’t mind this too much–from the start.

What first bothered me was a reenactment on Asgard of Loki’s presumed death while fighting Malekith during Thor: The Dark World. In the movie, this was an extremely emotional sequence portraying grief and anguish that choked up anyone watching it, but the play reenacted it in a cheesy way that seemed to suck the severity out of that scene. This isn’t the only sequence of death being turned into a joke. There are several gladiator corpses just lying in a hallway and the character Korg (Taika Waititi) brushes it off like it’s no big deal. The Grandmaster melts a captured slave into a pile of goo in front of Thor and the horror is taken out of it by a character commenting on how the goo smells like burnt toast.

Furthermore, four key characters from the past Thor films are just brushed aside like they don’t mean anything. Three of Thor’s friends are killed by Hela and not given more than a brief dramatic crescendo in the score. Jane is shrugged off as if she was a high school crush and Thor hadn’t done everything in his power to save her from the Aether in Thor: The Dark World. These all seemed like cheap ways to trim down the cast. Only two major deaths out of the five major character deaths in this film had any real emotional weight and one of the characters we only knew in this film only.

The jokes destroyed the majority of the tension in the first half of the film. Though my fellow moviegoer enjoyed the comedy, I shifted uncomfortably in my seat as I shocked myself by thinking, “I actually don’t like this movie.” Fortunately, the latter half of the film redeemed it for me to a point. The director finally let up on the jokes so some emotional tension could build, but even at the end during an emotional peak, two jokes were inserted that ruined the moment.

Now I did enjoy the Norse elements. It made my mythological geek heart happy to see Hela (an actual female lord of the dead), Fenris the Norse wolf of the apocalypse, and valkyries included in a film. It also delighted me to see Thor grow into an even better man and a more worthy king. With each movie, he’s in he develops into a more amazing superhero. I also liked that Hulk/Bruce Banner got to be more focal in a film. Since Thor: Ragnarok has a smaller cast, this allows for more time spent with each character and the Hulk/Bruce got his fair share of development. Additionally, Doctor Strange’s brief cameo was a joy to see.

The score had some interesting choices. From the beginning, it incorporated a lot of techno and synth. I would have hoped this would have been quarantined to the more modern parts of the universe as opposed to Thor’s world as well. It seemed like a strange mishmash of tones.

Overall, Thor: Ragnarok was bold to pioneer into merging two very different genres and inserting comedy, though I don’t believe the comedy was the best choice. Thor will always be my favorite superhero, but unfortunately, this is my least favorite Thor film. 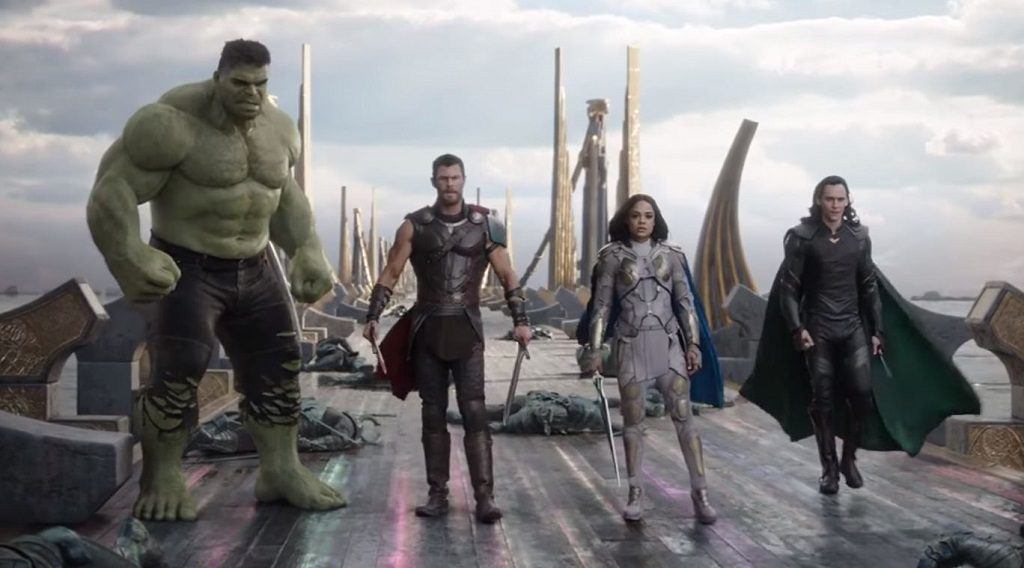 + Fun use of Norse legends + Hulk gets the spotlight in a Marvel Film + The Doctor Strange cameo + What fangirls have been hoping for Loki has finally happened (Spoilers, sweetie)

Thor Ragnarok had the potential to be pioneer film in genre merging, but the emotion-leeching comedy made it fall short.