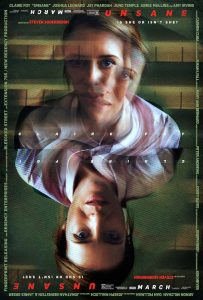 Steven Soderbergh is back to yet again interrupt his hastily announced retirement with another new independent film. This time around after his critical (although lacking financial) success with last year’s wonderful heist drama Logan Lucky he’s bringing to the table an experimental horror film he shot entirely on an iPhone 7 Plus.

Language/Crude Humor: Multiple uses of F*** and other uses of severe language throughout the film.

Drug/Alcohol Use: A character is mentioned as having an opioid addiction. 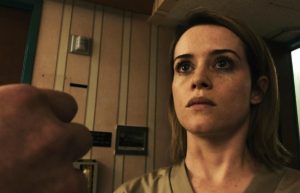 Steven Soderbergh is one of the great gifts of modern independent filmmaking. He has since become the youngest solo director in history to win the Palme d’Or at the Cannes Film Festival in 1989 with his freshman feature Sex, Lies, and Videotape. His career since then has been one of monumental experimentation and intermediate success. His breakout successes with major Hollywood films like Oceans Eleven, Magic Mike, and Contagion were joined by smaller but no less impressive efforts including Out of Sight, Traffic, Haywire, and The Informant!.

In 2013 he infamously threatened to retire from filmmaking before unsurprisingly and abruptly returning last summer with his critically acclaimed heist drama Logan Lucky. The wait, of course, was somewhat alleviated by the fact that he was shooting, directing, and editing his own Cinemax TV series The Knick for two years of his three-year retirement. With his next film being a sports drama called High Flying Bird due next year it would appear that we’re going to get a lot more Soderbergh in the next few years and that definitely isn’t a bad thing!

This year’s inclusion to the canon of Soderbergh’s filmography is a rather unexpected yet no less welcome addition to his body of work. Unsane is properly understood as a rather more experimental inclusion in his filmography. I’m most immediately reminded of his indie drama The Girlfriend Experience in terms of its visual aesthetic and unique approach to visual storytelling. Naturally, though both films have very different goals as movies. Unsane‘s biggest marketing play and gimmick that made it was the fact that the film was entirely shot on an iPhone 7 Plus. This isn’t the first time that a wide release movie has been filmed entirely in this fashion. Sean Baker, who has recently gained attention for last year’s The Florida Project, directed his 2014 comedy-drama Tangerine entirely on a cell phone with several specialized lenses and post-production color correction supplementing the film.

The difference though is that Soderbergh isn’t cheating. He really does use the base iPhone with all its limitations to shoot a major feature film. The results visually speaking are mixed but functional. Soderbergh has always had one of the most economical shooting styles of any major filmmaker working today and his use of the camera remains as purposeful as ever. The iPhone camera lens is clearly intended as a short throw lens for close up photography so there are times when the medium to wide shots in the film look unnaturally flat compared to how your average film camera but it never becomes a deal breaker. Regardless of some occasionally visual hiccups, Soderbergh’s greatest skill as a filmmaker remains his storytelling ability. While he didn’t script the film this time around, Soderbergh has an adapt ability to translate material for the camera and here his highly economic filmmaking style meshes well with the movie’s B-movie thriller aesthetic.

The story we’re introduced to is one that is best defined by its pathway of twists, turns, inversions, and audience emotional manipulation. It starts out rather simply straightforward but quickly the minor inversions and plot twists start changing the context of the story and slowly build into the movie’s themes. As we meet our lead character Sawyer Valentini (Claire Foy) we quickly get wrapped up the minute details of her life as a young businesswoman casually dealing with sexist coworkers and living the life of a modern sexually-freed woman. Slowly the circumstances of her life begin to unfold and we come to understand that she is, in fact, a victim of a stalker. After a therapy appointment leads to a minor misunderstanding she finds herself in the midst of a bizarre escalating situation involving involuntary institutionalization at a mental ward. The question of the story ultimately turns out to be whether or not what Sawyer is telling the people is honest or if she really is insane.

That central question is a fascinating one but it builds into a rather surprisingly dark theme. Sexual assault is very much topical in the mind of the film and its themes. At some point in the film, the majority of the film’s cast of female characters are made to experience either sexual harassment or violence at the hands of men. This ends up being foreshadowing for the film’s central question of Sawyer’s sincerity in both her assessment of her mental health but also of whether or not the situation with her stalker is real or not. It’s very much playing into the modern feminist idea of believing the victims of sexual assault. I mentioned that the film was very similar to The Girlfriend Experience visually but in a spiritual sense I think this film’s closest cousin would have to be Get Out. Unsane very much is to sexual assault as Get Out was to cultural appropriation.

Considering the weight of that performance Claire Foy manages to turn in an excellent leading role as Sawyer. Foy is a relatively inexperienced actress with only a few credits with films like Season of the Witch and Rosewater, and the hit Netflix show The Crown but here she shows up fully formed and giving an excellent performance that really calls upon her expressiveness and her ability to carry a scene through quiet fear.

Unsane isn’t the most polished or well-crafted member of Soderbergh’s filmography. It’s very much an experiment in visual filmmaking. That said the sheer strength for the script alongside his natural talent behind the camera made this one of the most exciting and fun horror/thrillers to hit theaters this year and one of the most impassioned projects Soderbergh has made in a while. It’s good to see the youthful spirit and desire to experiment and push the medium forward slightly bubbling up still in one of our most accomplished directors considering how much he’s made it clear he’s willing to call it quits. Whatever the temptation may be to walk away though it mustn’t be half as enticing as the temptation to create something new.

Unsane is one of the best films of 2018 so far! Soderbergh crafts a fun, suspenseful, and thoughtful psychological thriller with a great deal on its mind about the plight of victims of stalking and violence.