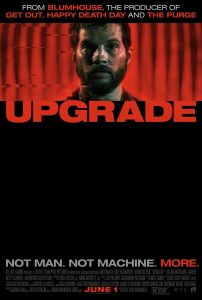 Upgrade is a high-quality low budget film. This may seem like an oxymoron. While it does have flaws and is not necessarily perfect, it nonetheless stood its ground in cinematography, choreography, writing, and its plot twist. I was not expecting to hit the ground running this summer in the independent films, but this completely convinced me otherwise.

Sexual Content: Grey and his wife passionately kiss in the car but nothing beyond that.

Other Negative Content: Revenge through bloody murder. It gets really dark as the film goes on.

Positive Content: Very thought provoking in regards to the topic of Artificial Intelligence and the dangers of worshipping science while rejecting morality and ethics. 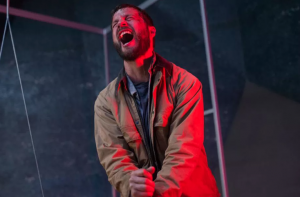 In a time where summer’s blockbusters let alone films throughout each year set up for sequels or spinoffs, it is nice every now and then to have a standalone with no intention of sequels. Going beyond that, it is chilling yet satisfying to see a studio push the boundaries in storytelling rather than falling back to cliches or Deus Ex Machina moments. The revenge story of Upgrade is nothing new. It is the dark futuristic setting that makes it absolutely interesting, enjoyable, and satisfying.

It comes as no surprise that Director/Writer Leigh Whannell would be behind this small budget piece. For those that are not familiar with Leigh Whannell, he is behind the writing for the Saw I, II, & III (’04, ’05, ’06), Insidious (2011), and much more. What do these films have in common? Low budget. Many people are under the impression that a low budget film equals low quality, but in many cases, this is not so. Upgrade‘s budget was between $3 million to $5 million, yet the film was the exact opposite of cheap or low quality. Due to Director Whannell’s background in creating small budget films, he was able to stretch the dollar thin in its final production.

While the plot is straightforward, the dark setting is the heaviest element throughout the film. As seen in the trailer, Grey’s wife is murdered and he is paralyzed from the neck down. While the first thirty minutes takes its time, it develops the overall loneliness in a future where technology is advanced. It became very symbolic in that technology can only go so far to meet human needs. You can have so much tech and yet still be lonely. Along with that, there is yet again the classic telling on the dangers of artificial intelligence for the sake of “peace” and “human progression.” As seen with Grey’s character, the taking up of such advanced technology allows for the possibility of abandoning morals and ethics. Humankind in a sense becomes the tech itself–making decisions without the thought of consequences.

Adding on to the technology, most revenge/sci-fi films show the main character having either no emotion or having only anger and rage. Case and point, John Wick (2014) and Taken (2009). In Upgrade, however, there is a small twist. While Grey allows STEM to use his body for self-defense as seen in the trailer, he is not thrilled by the dead body outcomes. He comes off as rather horrified and even holds back on looking at it happen. While it does allow for depth, it also allows for small laughable moments as we see his reactions. Along that topic, the humor in the film is one that is lightly sprinkled in parts of the story, rather than being dumped in excess. It is in small moments between STEM and Grey that becomes comical as they discuss ethics and morality….after taking a life. Humor can be difficult to add into a film as heavy and as dark as this, and Director/Writer Whannell’s did it perfectly.

While the film may come off as cliche in a trailer, its execution is a different story. Upgrade doesn’t quickly jump into the action, but rather grows to get there. It doesn’t shut down emotion through brutal killings but displays it heavily. It doesn’t rely on shaky-cam or sacrifice choreography but embraces both highly. It takes the topic of artificial intelligence to a different level along with the stunt choreography. And just when you think you have the ending figured out, it throws you a curveball. Upgrade is a must-see once…or twice…maybe three times.

+ Powerful message on A.I. and technology. + Cinematography and choreography working together. + A classic plot with a twist.

- Slows down in a number of scenes.

I wasn't sure what to expect Upgrade since I wasn't sold on the trailer to begin with. Man, was that amazing! Absolutely glad I got to see it, let alone review it!