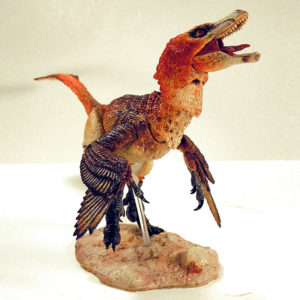 Accessories: Change of toes, base, stand, two support options, and a background display.

I’ve been following Creative Beast Studio on Instagram for a while now, and have just marveled at what David Silva has been sculpting and sharing. Last year, they completed their very successful KickStarter campaign of Beasts of the Mesozoic: Raptor Series… and I had just bought a house. Needless to say, money was a little tight and I had to miss out on supporting these figures. I was bummed, but immediately did my part in letting a YouTuber who turned me onto Saurian (a game I actually got to support) know about the campaign. He gave my tweet a like. I sat and watched for a while, and just a couple of weeks ago, Creative Beast opened a pre-order store with a slight discount and I knew I had to jump on it. I ordered one raptor and my wife told me I was cut off from buying anything for a couple months. Oops! Oh well, I finally got one of these guys in my hands!

There are three types of people when it comes to dinosaurs: The ones who want them to be as accurate as possible; the ones who like their movie monsters to stay the way they remember; and then the parents who just don’t care. I, of course, am one of those who likes for things to be accurate (but also love my movie monsters). As far as science can tell us currently, the actual Velociraptor (vuh-los-uh-rap-ter) may have looked something like this. The V. mongoliensis figure has down-like feathers covering its body, feathers on the tail, mature flying-type feathers on its arms, and the signature toe claw. As for the coloring, Velociraptor mongoliensis would have been a desert dweller and a hunter, so it would make sense for its coloring to try to blend in with the sandy scenery. 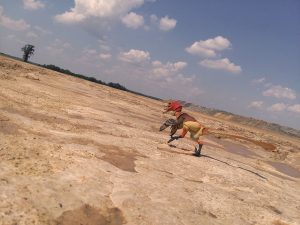 It’s nearly impossible to talk about raptors without talking about the story that made them so famous. That’s right, Theodore Rex! Nah, I’m just kidding; no one watched that movie. Jurassic Park! When Michael Crichton was writing his novel, he used a different dromaeosaurid (running lizard) and changed the name. The dinosaurs chasing children in kitchens and running with Chris Pratt should actually be called Deinonychus (dy-NON-i-kəs) (which is also the name I gave my Sceptile, and is the name of a Dutch doom metal band)! Crichton actually met with the discoverer of Deinonychus several times to talk about how the dino would possibly act and look, but ultimately had to apologize to John Ostrom because he decided to call it by its smaller family member, Velociraptor. The reason for the name change is simply because “Velociraptor” sounds cooler. And I can’t argue, it really does. But, ouch! “Your dinosaur won’t become famous because you didn’t give it a cool enough name” is pretty harsh! Even though I’m sure the actual dinosaurs don’t care, it would be the equivalent of someone calling you by your baby brother’s name. (Which is very annoying, and has happened to me more times than I care to remember since my brother was more charismatic than me when I was a teen). 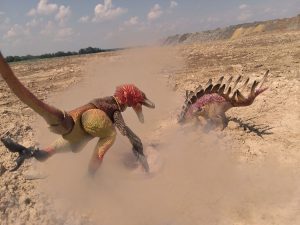 Why is it always the Triceratops or Stegosaurus that are locked in mortal combat?

Velociraptor means “swift robber,” while Deinonychus means “terrible claw”. However, most dromaeosauridae are believed to have the famous toe claw.

Velociraptors have mostly been found in Mongolia, whereas Deinonychus have been found in Montana (which is where Dr. Alan Grant is excavating fossils in both the movie and book Jurassic Park), Wyoming, Oklahoma, and Utah; with possible Deinonychus teeth found as far as Maryland!

Ostrom’s finding of Deinonychus sparked the debate that changed the way we now look at dinosaurs. Before, it was mostly believed that dinos were cold-blooded, tail-dragging, upright walkers basically just waiting to go extinct. Today, we can’t think of dinosaurs without thinking about how a raptor might be hiding in the tall grass, waiting to leap out and attack.

The top of the box boasts 26 points of articulation, which is just about all you need! Articulated jaw and tongue(!), and about three sections in the neck/head area; the middle being a ball peg allowing the head to move in all directions and the base of the neck being pinned in so it can only move right to left. Shoulders are pegged hinges which allow the arm to rotate a full 360 and then hinge up and down. Elbows and hands are on swivels so they can only move up and down… which makes sense, since raptor bones wouldn’t have allowed their arms to make doorknob turning actions. The hands face inward, which is correct for the actual animal; and not forward like a zombie. Archeologists jokingly call the incorrect forward hands seen on Blue and the others “zombie hands.” 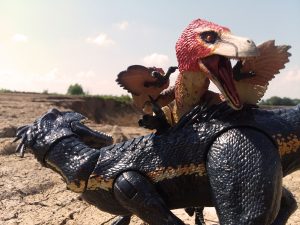 The middle has a section that feels like it’s a ball peg, which allows the torso to move up and down pretty well, but not so much side-to-side. The hips are on a ball peg, which gives a pretty good range of movement. The knees swivel and bend. The heel (backward bird-like knee) can only hinge up and down, as well as the claw toe and the first knuckle of the other two toes. The two toes are removable, so they have a peg which allows the toes to turn a full 360. Almost like an ankle-rocker pivot. 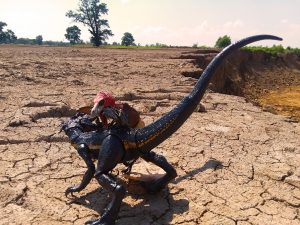 As I was adjusting this scene, I switched to a different posing rod. Before I could get everything set up and find the right angles, it snapped.

At the base of the tail, it feels like a ball peg, which allows the tail to rotate a full 360, but the tail is hindered by the sculpt and can’t really move up/down/left/right—only just the tiniest bit. When you get the figure in the box, you have to attach the tail. The tail fits into a ball peg and has full articulation! And the best part? It’s bendy! The tail is made of a flexible material with a rod baked right into the middle; much like how a Doc Ock figure’s tentacle arms should be! Overall, the joints are nice and tight (but not too tight), so you won’t have to worry about certain parts drooping as you try to line up your shot. 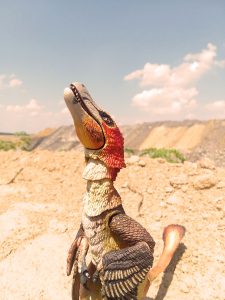 Sometimes you just gotta sunbathe. Though, not recommended in the desert.

There is a reason why the figure comes with a base and clear prop. I cannot get the figure to stand on its own, no matter how hard I try. The feet are much too small to stand on (but look good for the figure and not “kid-ish”). The toes kind of wimp out under the weight, and tip over as soon as I take my hands off the figure. The clear prop is meant to help with this, but even it feels a little clunky as I can’t seem to get the cradles to fit just right. I find myself wanting one of those NECA dynamic articulated flight stands. Until I’m able to get my hands on one, I might just have to get fancy with a wire coat hanger (this part of the review was written before I took pictures. You’ll see what I came up with before I do. Whoa, the future is crazy!).

Update: I forgot to bring a hanger, and could not find anywhere that sold dynamic stands, so I just used what was given. I also forgot my SD card, so I had to take pictures with my phone. :/) 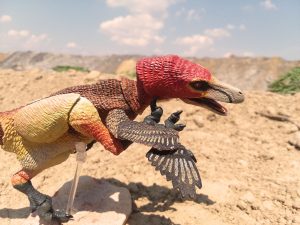 Is this raptor pondering life’s mysteries or just itching?

My only real issue with this beast is its standability. If you’re just displaying it in a “set it and forget it” sort of way, then the included base and rod might be all you need. If you’re into toy photography or want to show off your posing prowess, then you might want to hit up Amazon and get something a little more substantial. While I was out trying to take these pictures, one of the resting pieces broke when it was in the stand, cutting my photog session shorter than I wanted. 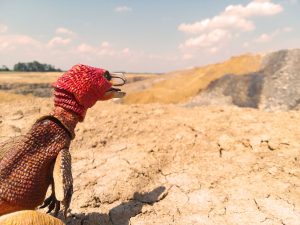 When I took this pic, I thought it was pretty good. Now I see it and imagine him thinking “Huh. Well wouldja look at that? …Clouds.”

Aside from standability, this really is a great figure to have, and I kind of want to get more; especially that blue-eyed Velociraptor osmolskea (those eyes are just so striking)! Speaking of eyes, for some reason when I look at the V. mongoliensis straight on, it reminds me of Ryuk from Death Note. The nestlings also look like a must-get at some point in the future.

If, for some reason, you want to make a raptor of your own, Creative Beast Studio have Build-a-Raptor sets where you can choose a Velociraptor set or an Atrociraptor set. Both are about $50 each, but you can choose between different heads, collars, and wings/arms. You can get creative by mixing and matching, or just have a blank canvas to paint a raptor to look like the Road Runner. Totally up to you! 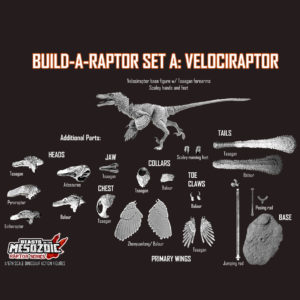 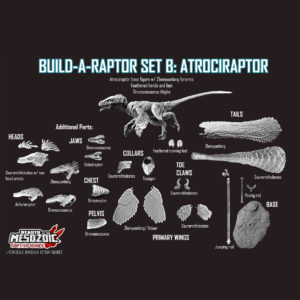