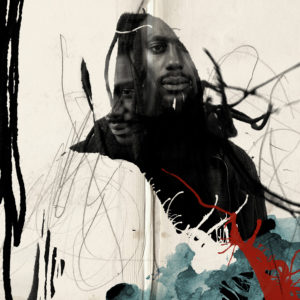 If you’re familiar with spoken word, you’re aware of its…. awkwardness. On its own, it sounds poetic, yet match a beat and it doesn’t always flow smoothly.

Writing spoken word since the early 2000’s, Propaganda has composed multiple incredible albums over the past several years with record label, Humble Beast. His use of spoken word reminds us of the rough power of words when they don’t easily flow. Though bitter to the ears at times, they gradually taste like honey to the soul.

Similar to his other music, ‘Three Cord Bond’ follows a basic melody, here consisting throughout of piano and synthetic beats. The art of this allows for emphasis on the power of lyrics, rather than distracting the audience with a complicated melody.

Consisting of three distinct verses and a concluding fourth, Propaganda draws on three interwoven themes– each beginning with a declaration of covetousness and ignorance of other racial struggles. In the body of each, Propaganda explores his perspective of the difficulties faced by different ethnic races around him. As the fourth verse rounds up and the beat mellows, Propaganda declares his final verse.

Speaking from his own personal upbringing in a multi-ethnic neighborhood rife with violence and racism, Propaganda explores the treatment he received as an African-American and the cultural stereotypes accepted about Hispanic and Caucasian people. This permeates through all three verses, as he explores loss of cultural identity within his own ethnicity while simultaneously stereotyping those around him. Expressing this, he cries in the first verse,

Homies not stupid can tell the difference between
Admiration and mockery, please

So we protected our music because truthfully
We thought it was all we had
And watched y’all make a killing off it, hip hop to jazz

Later, he continues the theme, identifying the history of colonization experienced by his Hispanic audience along with the turbulent history of some Caucasian cultures,

Silly, we know, but what you supposed to do when all you know
Your closest cultural customs are similar to your captors?
Huh, pastor?

We ain’t know your story, shoot we thought white was white
Not Irish or Celtic, or the Bolshevik plight
Or the pain of bearing stains inherited . . .

This humble realization is likely why Propaganda devoted a verse for each group. One of the most revealing examples is found in the second verse when he says, “Cόmo se dice? Lo siento mucho. Por favor” which roughly translates to “How do you say? I’m so sorry. Please.” It acknowledges that every ethnicity endures unique struggles, emerging from historical trauma, grief, loss, pain, and dysfunction.

Propaganda admits these struggles cannot be summed up nor apologized for in a moment, but require personable recognition for growth and healing. In response, he repeatedly surrenders, ‘We ain’t know better’, ultimately leading to the realization that,

But now we understand we suffered the same stain,
We gain from a shared ancestor, we all descend from Adam’s sin

This Biblical perspective parallels the issue of identity confronted earlier in his monologue. From the loss of personhood in the first verse, the spiritual colonization in the second, and the spiritual pride in the third… Propaganda succinctly notes the deeper stains in our culture, concluding that the root of all three is found in the inherited sin from Adam.

This echoes Paul’s message in Romans 5:12 when he speaks of Adam’s transgression and human depravity, “Therefore, just as sin entered the world through one man, and death through sin, and in this way death came to all people, because all sinned”. Yet in full context leading up to verse 20, this passage also describes Christ as the second Adam who brings life, rather than death.

Here is the message of hope Propaganda explores at the end of verse four, where he describes each ethnicity as being bound together as one cord,

Dyed the color red from our Savior’s blood shed,
And a rope finds its strength from multiple lines wrapped,
Around each other until they all perfectly intertwined

These lyrics capture Solomon’s wisdom in Ecclesiastes 4:12, where he explains a cord of multiple strands is far stronger than that of one or two.

Addressing tense racial divides, Propaganda reminds us that all people share common struggles which are concealed and overlooked by envy and racism. Ultimately, we all derive pain and sin from our common ancestor, Adam. Regardless of our skin color, all aspects of our lives are gripped by sin… until Christ brings liberation.

Sometimes considered hollow in its usage, Galatians 3:28 rings true here where Paul emphasizes “There is neither Jew nor Gentile, neither slave nor free, nor is there male and female, for you are all are one in Christ Jesus.” Yet, for a mainly Gentile audience, Paul’s words would have hit home reminding that common societal divisions are now no longer relevant in Christ “who has made us both one and has broken down in his flesh the dividing wall of hostility” (Ephesians 2:14).

Though the contemporary, prevailing worldviews may argue we have come a long way from Roman times… truthfully, we haven’t. We still need to remember that despite how we may look, each of us are stained by the same sin and cleansed by the same blood.

This speaks a great deal about the value of artists like Propaganda to inspire our generation. From the same city that brought artists whose painful, and often violent, stories inspired the film Straight Outta Compton (while insightful, not a film I endorse watching), Propaganda’s music reminds us that Christ remains our hope in a broken world.

In conclusion, Propaganda simply implores us to “call it even and walk through life, knowing that a Three Cord Bond is not easily broken.”