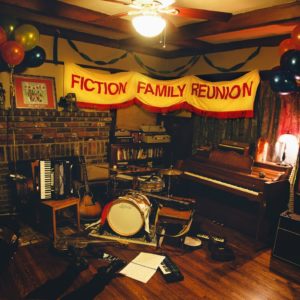 On paper, the equation doesn’t seem to add up. John Foreman’s the front man for the alternative rock group, Switchfoot. Sean Watkins makes up 1/3 of the progressive bluegrass group Nickel Creek. It doesn’t seem like they move in similar circles, or would join creative forces. But that’s precisely what they’ve done in their joint side project: Fiction Family.

When I heard Fiction Family’s first album, it was nice but unremarkable. I didn’t feel a need to return to it at all. But after a wait of a few years, Fiction Family released a new LP, Fiction Family Reunion, in 2013. When I listened to that one, I kicked myself for not doing it sooner.

Let’s talk about the musicianship of the album first. Both Foreman and Watkins alternate on lead vocal duties. It can sometimes be confusing because they have similar vocal registers. It took awhile to differentiate between the two in my mind. Also, this fusion takes away from Foreman a bit. While Foreman is a serviceable guitarist, his main strength is his vocal ability. On the other hand, Watkins is a master guitarist, and his solos and licks throughout the album shine through. Because of this, it almost feels that Foreman gets shortchanged in this particular regard.

Fiction Family Reunion’s sound is stripped-down, but the album does have some nice sonic layering. For example, “Up Against the Wall” has a great subdued horn section that adds wistfulness to the song that fits the lyrics. There are also some great instrumental interludes that feature hints of electronica.

A lot of the songs are enjoyable to listen to, particularly “Just Rob Me” and “Reality Calls.” They both hearken back to older forms of popular music, but reinvent the sounds to be fresh on the ear.

The weakest song on the album is “Give Me Back My Girl.” This isn’t because it’s a bad song–it’s actually a lot of fun. It sounds a lot like a Switchfoot B-side, though. Again, not horrible and even understandable, but it doesn’t sound like the rest of the album at all.

There are a lot of great lyrics dealing with spiritual matters on the album, too. Watson has two standout songs in “Guilt” and “Damaged.” “Guilt” is an outward facing challenge to the practice of trying to shame people into belief. I don’t know whether Watson is a believer or not, but he’s spot on. Guilt isn’t enough of a motivator to get people to love God. In fact, it pushes people away. The interesting thing, though, is that he counters with “Damaged,” a song about trying to hide the rot in his life. The propensity to do this is something that’s common even with Christians. The problem, though, is that we all have the desire to put the best face forward. We all want to appear like we have our respective act together, but we often do not succeed under our own power.”Guilt” and “Damaged” form a quality pair! One talks about judgment which comes from external forces and the other talks about knowing there’s something wrong on the inside. They make for a great thematic thread through the middle of the album.

There are other songs that have great spiritual content as well. Foreman’s tune “God Badge” echoes “Damaged,” but from a different perspective. Foreman emphasizes that the hatred and anger of trying to hold on to a particular belief does nothing—not for the hated, nor for the hater. “There is no us or them, there’s only folk who you do or don’t understand” is a particularly haunting line.

Fiction Family Reunion is an album that sticks with me. It’s not perfect, but it’s really close. The powerful lyrics and the simple, refreshing sound make it easy to come back to this one over and over.

Jordan wears a couple of different hats. Most of the time, it's the hat of the commonplace office drone. When he can escape the shackles of that particular drudgery, you're likely to find Jordan doing nerdy things with nerdy people. A fan of tabletop games, comic books, movies, and music, Jordan spends his weekends bouncing around the Midatlantic region, from Virginia to Pennsylvania, trying to fit it all in. Additionally, he is a co-founder of a fledgling social media collective, Nerd Circle Podcast Productions. He is the Game Master and Master of Ceremonies for the RPG actual play podcast, Bone Throwers Theater, and cohost of Carlin and Jordan's Most Excellent Movie Night, a cinema review show focusing on content available from the internet's largest streaming subscription service. Jordan is currently a candidate for ordination in the Free Methodist Church. So that means a lot of classwork late into the night. He's also preparing to help found a new FM society in his home county.