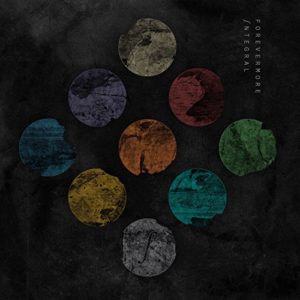 There’s a saying in marketing that people have to see something six times before they actually check it out. It’s the basic principle behind “brand awareness.” I was very much a victim of this when I discovered Forevermore. About two years ago, their album, Telos, dropped, and, though I had never heard of the band, I was assaulted on social media by all my friends going ballistic over how good the album was. I finally gave in and checked it out, and was not disappointed. I’ve been a huge fan ever since, and I think Forevermore is one of the most criminally underrated bands in the metalcore scene right now.

The basic concept of the new album Integral is Spiral Dynamics, a social theory that says that human history can be divided up into a handful of periods based on the prevailing social mentalities of the time (the hunter/gatherer society and the egalitarian society are two examples) and that each period of human history conveniently coincides with an individual’s social and mental growth in life (as children we all start off primitive and yearning for survival, as we grow we tend to lean toward superstitious beliefs until our parents and teachers educate us out of it, and so forth). It’s an intensely interesting theory and it’s actually not very difficult to understand at all. I encourage all of our readers to check it out when they have the time.

Forevermore is a Christian band, and as such many of their songs contain religious overtones and perspectives. Some of the songs on Integral diverge from this message as they cover violent periods or “heretical” thoughts that rose to popularity throughout human history, but the band does an excellent job of bringing it all back home in the end and sometimes even making subtle comments from a religious perspective during those periods.

Before I dive in, I want it to be noted that Forevermore is a bit of a musical oddity. They have an extremely consistent sound, not only from song to song but also album to album. There’s definitely been some musical growth and stylistic evolution, but it’s easy to listen to a song and go “this sounds like Forevermore.” As a result, there’s not usually much to say about them in terms of their sound. Unlike other bands, where the sound of the band and their style might change dramatically from song to song, every work of Integral sounds like Forevermore, and there’s really no point in noting style unless there’s a deviation from it. Having said that, though, Forever manages to keep things fresh and interesting the whole way through. Although every song might use similar techniques and styles, you don’t feel like you’ve been listening to the same song for 40 minutes. So while my review might not make too many mentions of the musical content itself, you can rest assured that this album is far from boring.

.01 I: I’m a big fan of a well-done intro track. I love it when I can imagine an album being played live, start to finish, exactly as is and it works. “I” is an excellent track, starting very quiet, minimal, and simple, and slowly building anticipation toward the coming song.

.02 Nascent: The debut single, “Nascent” covers the first period of human history–mankind’s “kill or be killed,” “survival of the fittest” era. There is no thought given to purpose, God, or even emotional fulfillment. Every day is a struggle just to stay alive. As I mentioned before, Forevermore is a band with a very consistent sound. Fans will immediately feel at home in this song featuring many of their signature riff patterns and technical playing skills that really stood out on Telos.

.03 Noumina: Covering the period of superstitious polytheism and the tribal era of humanity, this song features many great lyrics that clearly draw a deep biblical reference. Very emotional songwriting combines with an awesome use of synth in the background throughout the course of the song that really add a layer of complexity and melody.

.04 Overlord: All about the rise of self and power, ego and conquest, this song is hard-hitting and intense. It is a phase of human history that, unfortunately, many people never grow out of, talking about the rise of kings and powers, people who feel they are entitled to take whatever they want because they have the sheer force to do it. This song is a perfect example of one of my favorite things about Forevermore–their ability to combine complex technical riffs with melodic and beautiful scales to make something both chaotic and pleasing at the same time.

.05 Order: “Order” marks a fundamental shift in human mentality. Life now has meaning and purpose. Unfortunately, the heart of this era has fallen just a bit short, as that meaning and purpose is derived from legalism–sort of a stereotypical “be good, go to heaven/do bad, go to hell” thought process. It’s an advancement in the human race’s journey to actualization, but it’s incomplete. The song itself reflects the shift by starting off with a much quieter, almost “subdued” feel, accompanied by a lot of clean singing.

.06 Enterprise: This is sadly an era of personal growth most people never grow out of. “Be your own man, make yourself, use everything at your disposal to play the game, look out for #1.” Unfortunately I don’t have much to say about this song. The lyrics are powerful and aggressive, and the song is solid (like the entire album), but there’s nothing in particular that makes it stand out. Incredible outro riff, though.

.07 Empath: This song reflects the era in human thinking where egalitarianism, equality, and seeking to understand others has become the norm. Everyone is equal and should be afforded equal opportunities, and the tone is very critical of people who place profit above people. Personally, I think humanity is caught somewhere between here and the last few phases of the album.

.08 Ikagi: “Ikagi” is an instrumental representing the shift from the first half of human history (tier 1) to the second half (tier 2), from lower thinking to higher thinking. As a musician, I really respect the fact that this instrumental is done on real instruments. Very often, when bands do instrumentals, they do a ton of post-production–samples and synths and strings, instruments that they don’t actually have and they could never use live. If most bands wanted to play their interludes live, they’d have to press play on a Macbook. Not this one. Forevermore could play this song live, just as easily as any other.

.09 Prism: Appreciation of the complexity of the world and everything in it is the theme of this album, and one of the more popular mindsets I encounter in today’s world. “Be you, but don’t hurt to others to do it.” There’s an excellent use of a tremolo picking technique throughout a good portion of this song that lends a subtle fullness its sound.

.10 Pandemica: As we reach the final and most recent era of social thinking, the theme here is: “Everything is connected. Everyone is an individual, but part of a larger whole. Compassion and global holistics are the key.” The song features an amazing opening riff and awesome vocal techniques, with a sort of shouted singing and the heavy vocals having a “radio distortion” effect. This song is a departure from most of the songs on the album–still heavy, but much more subdued and melodic, lots of singing, very intense.

.11 Integral: At last, we reach the final song. Being that “Pandemica” covered the final era of Spiral Dynamics, I was very curious what could be left to cover. I was pleased to find that, lyrically, the song deals with the idea that there is no perfect era, and that we will always be searching for perfection, and that’s a good thing. We should never get complacent and constantly be striving for improvement.

The consistent sound in Forevermore’s work is not a point against them. I would rather a band do one signature style really well than do a dozen different styles poorly. The boys in Forevermore know their sound and have it figured out. They’re not trying to reinvent the wheel or create a new subgenre. They’re sticking to what they know best, and sometimes that’s better than treading new ground and being awful at it. The strength of the album lies in the concept and storytelling, and having an excellent team of talented musicians behind it just makes it that much better. I definitely encourage fans of heavy music to check it out.

Integral is out now via Solid State Records, and Forevermore is currently touring in support of it.

The consistent sound in Forevermore's work is not a point against them. I would rather a band do one signature style really well than do a dozen different styles poorly. The boys in Forevermore know their sound and have it figured out. They're not trying to reinvent the wheel or create a new subgenre. They're sticking to what they know best, and sometimes that's better than treading new ground and being awful at it. The strength of the album lies in the concept and storytelling, and having an excellent team of talented musicians behind it just makes it that much better. I encourage fans of heavy music to check it out.