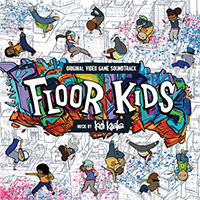 Back in January I had the opportunity to review Floor Kids on the Nintendo Switch; a rhythm-based breakdancing video game, from the minds of JonJon and Kid Koala with the help of MERJ Media. Though I gave it a 7/10 at the time, it remains as one of my favorite video games on the Switch and has left a great impact on me since then.

That lasting impact largely came from how well Floor Kids represented the culture, but what stuck with me even more was the music. While playing the game, I got to the point where I would turn down sound effects and rely on the visual cues for busting some moves. I mentioned in my review how I was waiting hear if a soundtrack would ever be released. Not only did I get what I was asking for, but in February we were contacted to help “break” the news so that I had the personal honor to do so.

The Floor Kids Soundtrack does not contain conventional lyrics. However, there are multiple tracks featuring narration. During these sequences the narrator speaks to the Floor Kids– the characters that players control within the video game. He takes the art of break dancing and puts it into a very spiritual and philosophical context, though it is important to note these reflections were never meant to be taken too seriously. The intention of these tracks is to offer advice to the player in a fluid way, appearing in storyboard scenes during the video game.

The Floor Kids Soundtrack is a whopping 42 tracks, but don’t let that discourage you from giving it a listen. After all, each of the tracks are fairly short due to the fact that they are a huge part of the rhythmic mechanics represented in the video game. Even the longest tracks run just over two minutes (likely because they didn’t want players mashing buttons for too long). Taken as a whole, the album length at 71 minutes exceeds most other albums, but through its shorter tracks brings a dynamic diversity combining for an outstanding project. 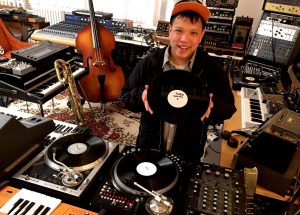 Kid Koala, thats quite a set-up you got there.

Kid Koala is a very talented artist. I discovered that he created the original scores to Scott Pilgrim vs. The World and Baby Driver—two of my favorite movies. When researching for the Floor Kids game review, I looked up his work and instantly gravitated to it. As a DJ/scratch artist, his music comes organically through instruments he knows how to play himself, rather than relying on sounds from a computer like many artists do these days. His style is imprinted into this soundtrack, and is unmatched by any other producer or composer I’ve heard.

The Floor Kids Soundtrack tells the same story as the video game within its own arrangement of tracks. A handful are accompanied by the narrator telling the story of the Floor Kids as they rise to fame and journey through various venues. As a result, you can hear the story without even having to play the video game. There is even a track toward the end of the album revealing the names of each kid you play as in the game. This is both a creative way to tell a story, and to invite people who might not own the right console or even play video games. 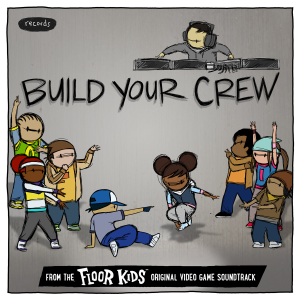 Accompanying that narrative journey, Kid Koala brings a history lesson on the art of breakdancing woven through all these tracks. Breakdancing is usually done alongside the hip-hop, funk, and breakbeat genres. Kid Koala somehow found a way to infuse each of the sounds we know and love from these genres into such a wide range of music. Listening to the album in its entirety, it’s easy to spot the influences within a track, as their titles give an idea of their origin too. You’ll know what to expect with tracks named “Robo Tronix”, “Pinballer”, and “Boogie Down” for example.

Some of my favorite tracks are those heavily inspired by the funk genre. I grew up listening to artists like Zapp & Roger, and the Dazz Band with my mom and the rest of my family during so many gatherings. Though I always had a certain appreciation for that kind of music, it’s Floor Kids that made me realize how well I knew that sound.

One last aspect worth noting about the album are the sections I first assumed were more tied to mechanics of the video game, particularly as you hear the kids’ voices doing countdowns or cheering “Go. Go. Go.” I didn’t expect to hear these in the soundtrack, but initially thought that these were meant for timing and build up to get the player’s attention. After some more time with the album, I grew more impressed with how those elements were not just sound effects carried over, but seamlessly integrated into the music. 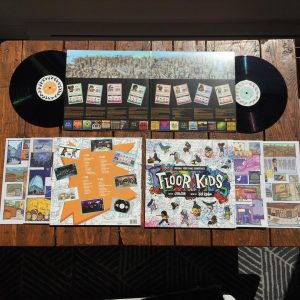 If you collect vinyl LPs, you may want this.

Honestly, it’s been tough to find anything I dislike about the Floor Kids Soundtrack. When I want to listen to one particular track, I find myself listening to the whole album. Of course, the music is best enjoyed together with the rest of the album; shuffling its tracks into a wider playlist will likely feel out of place. I also admit that the soundtrack’s main appeal is for those who already love this genre of music and its culture surrounding the project. Despite those minor limitations, this soundtrack is superb.

The Floor Kids Original Video Game Soundtrack has become one of my all time favorite soundtracks. I can find things to appreciate for various genres in music, but this album reaches me on a personal level that no other soundtracks have come close to. It’s even created some memories with my 14-month-old nephew that I will never forget: watching him wave his hands and kick his feet to “Smock Jams” as he sat on my lap was priceless. I truly feel that Kid Koala put his heart and soul into this project, and expect it will go down as some of his best work to date.