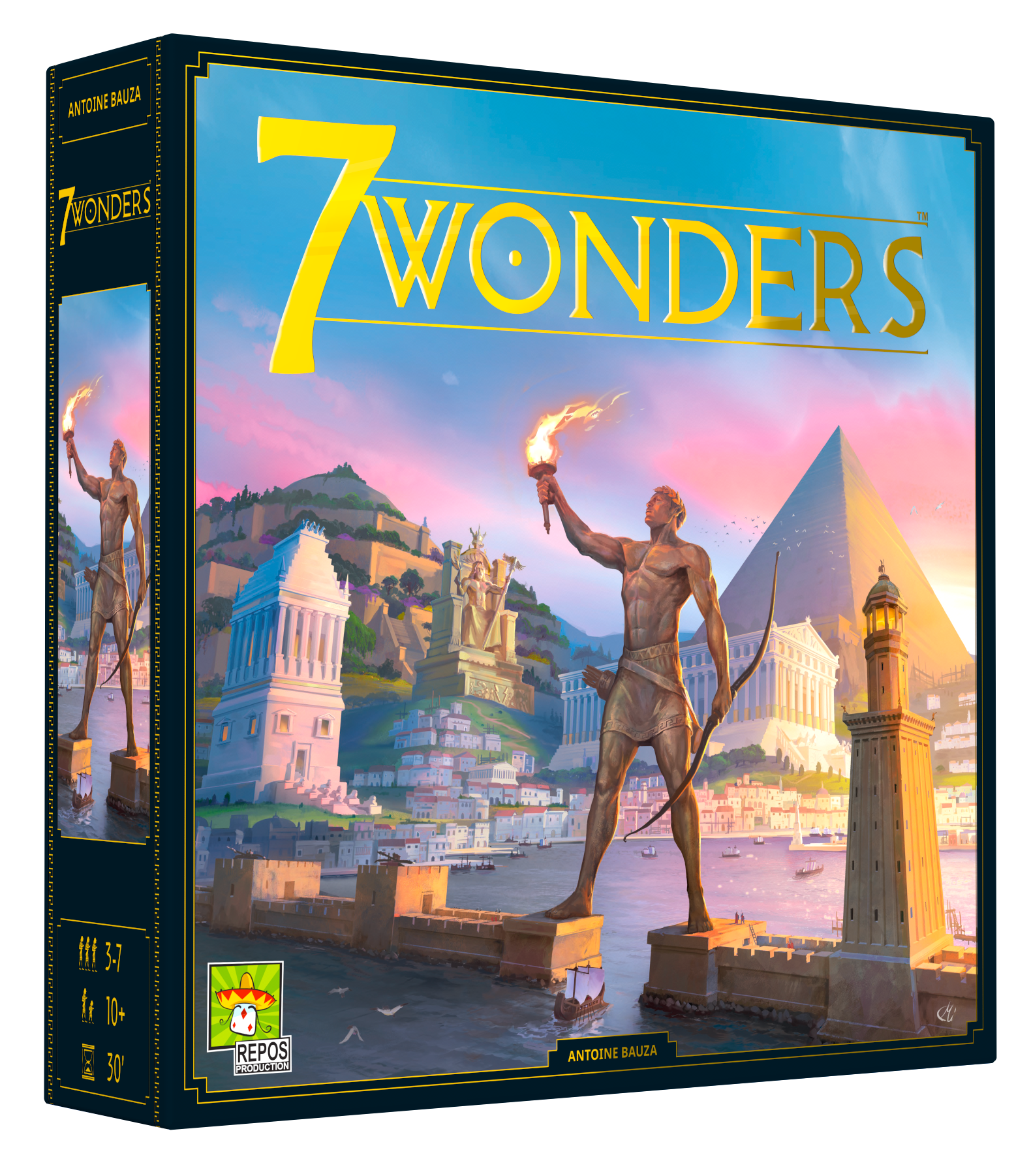 I still remember buying 7 Wonders off the shelf the minute it arrived, shortly after I jumped into the board gaming hobby. The game was so impactful that it forced the Spiel des Jahres jury to create a whole new award category: it was a bit too complex for a family with young children to play together, but it was too good not to be awarded. Everyone else agreed: 7 Wonders is advertised as the most-awarded board game of all time.

Ten years later, 7 Wonders is getting a new second edition, full of large cosmetic changes and small gameplay tweaks. I consider the first edition an easy 10 out of 10, so did we really need this? Let’s find out.

7 Wonders is a game about which many players already have an opinion, myself included. So this review is primarily going to focus on the changes in the second edition, which are largely cosmetic.

Really, that’s the selling point of the new 7 Wonders: it’s new and shiny, literally. The card backs now have a sparkly finish and a new bronze/silver/gold look; there is a very nice plastic insert (sleeved cards fit!), wonder boards are much larger, and the card fronts have been redesigned. The box is also a (slightly) more standard size. I’m sure there are other small touches that I’m forgetting, as well.

This is truly a gorgeous edition of 7 Wonders. The wonder boards are substantially larger, and the B sides now have “night” versions of the “day” artwork on the A sides, instead of the same artwork twice. The larger boards allow the new artwork to really stand out. Larger boards actually may seem counterintuitive, since 7 Wonders has always been a table hog, but the new card layout prevents this from being an issue.

Much like 7 Wonders: Duel, chains are now represented with icons, which are presented at the top of the card, rather than the bottom. This allows most of the card to now focus on Miguel Coimbra’s wonderful artwork, and also allows players to tuck cards directly under each other and under the wonder boards, without the need to “splay” cards diagonally to keep chains visible. It’s far more aesthetically pleasing, and more functional as well. A completely positive change in my book.

The new chain icons could take some getting used to, and not just because of the new symbols. As part of the new gameplay balances, some chains have been changed considerably: for example, one chain now goes straight from Age I to Age III, and the corresponding Age II card no longer belongs to any chain. There are a few new cards that replace some former duplicates in games for more players, and a few wonder boards were changed quite considerably. Right now, despite several plays of the new edition, the chains still just feel strange, so I cannot comment on the wisdom of the rebalancing, although I feel I should trust the designer and 10 years of worldwide data more than I should trust myself. Regarding the wonders, I feel like the changed wonders were the ones that really needed it; if anything, I would have also changed the B side of the Colossus of Rhodes.

So it’s a beautiful edition, and the gameplay balances seem positive. What’s not to like? I feel like there are some minor aesthetic blunders that I’m excessively peeved about, just because everything else is so nice. The included reference sheet of chains no longer includes the costs of each card on it, even though the old one did. Particularly with all the changes, advanced players will want that information. Why would you actively make a reference sheet worse!? Second, the box is a “more standard” size, but it really isn’t; it’s the standard 12-by-12 box like Ticket to Ride, but it’s too deep. It is more akin to the Queen games like Alhambra and Kingdom Builder, and was slightly too thick for the spot I saved for it on the shelf. Lastly, the insert is very nice, but they were making this as they were also making new editions of the expansions Cities, Leaders, and Armada. Why wouldn’t you make a future-proof insert that could house all of the expansions? I would even pay an extra $5 MSRP for that, to be honest.

Were those nitpicky complaints? Yes. But we’re in the realm of a premiere / vanity hobby now that we’re willing to consider paying $60 for a game we already own. And that’s the question, isn’t it: should you get 7 Wonders 2nd Edition? If you don’t own 7 Wonders yet, then yes, absolutely. If you already own the original and several expansions, then I would struggle to recommend you spend that much more money. But for me, Cities is the only essential expansion, so saying goodbye to my old edition was only a little bittersweet, and well worth the taste.

Thank you to Asmodee North America for providing a review copy of 7 Wonders: Second Edition.

One of the best games ever made has gotten even better.