I’ll never forget the first time I watched hundreds and hundreds of people who stacked outside the dealers hall before opening just to be one of the first 50 to pick up a copy of Ashes: Rise of the Phoenixborn.

Or perhaps when I very quickly learned huge crowds aren’t my jam… This is made worse by the abundance of folks pulling carts along with them.

Sure, my experience with GenCon isn’t as storied as those who’ve been attending for decades. Looking back on these years, however, my experience at GenCon is uniquely mine.

To be quite frank, aside from the mystery and buzz of my first year, GenCon has always been a chore for me. It’s a popular maxim these days, but GenCon isn’t the best con for playing games. Further, as a media person, the struggle of setting up meetings and cold-call hand shakes is difficult for me. When uninitiated friends ask me about the Best Four Days In Gaming, I invite them to attend for the spectacle, but don’t offer much excitement outside of that. 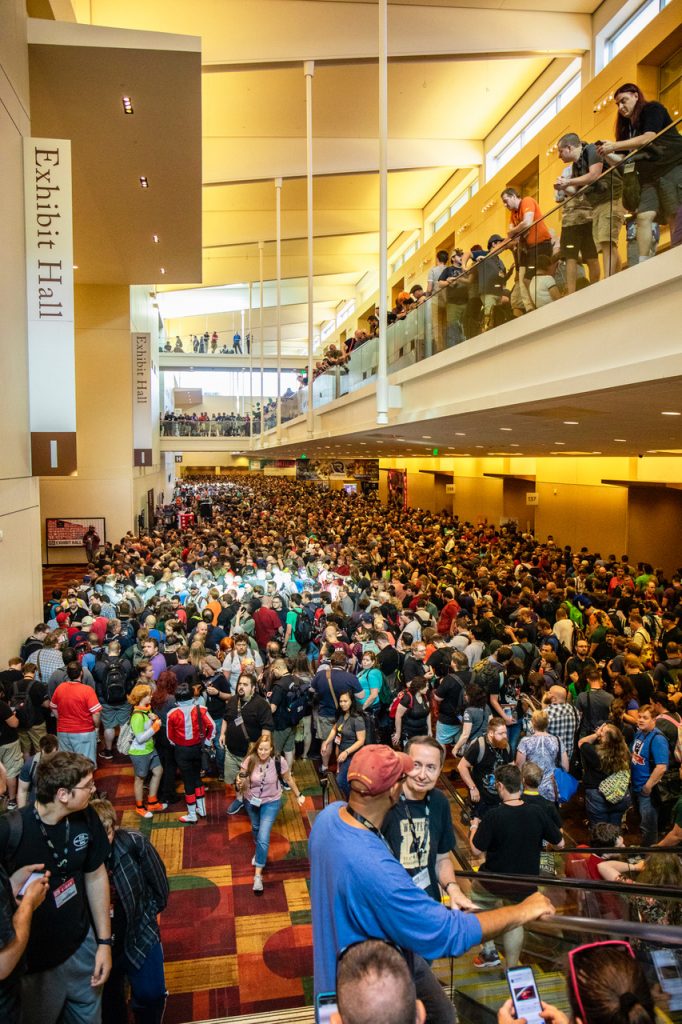 I’ve setup this article to inform you of my old distaste for GenCon, to now clue you in on why this year was amazing, fun, and revelatory for me… And as a result, offer counterpoints to my old ways, in hopes I might convince naysayers to hop on the GenCon bandwagon.

After two months of sitting and stewing on GenCon, here’s my advice for learning to love the beast.

I’ve attended GenCon with an old friend and twice with my brother-in-law. Listen, I love these guys, but something never clicked. Perhaps it was because I’d stick to a booth longer than they, or that I’d frenetically hop from booth to booth without warning. Yes, I realize I’m the culprit.

This year, I attended with Katie, my wife. This year was the best year.

For me, bringing my 25% nerdy wife to a 99% geeky extravaganza was a huge boon. She’d balance things perfectly for me, ask when I wanted to jump to another booth, and most surprisingly: stop me in an aisle because she was amazed at some publisher’s well-thought-out booth.

She isn’t into geeky stuff like I am, but she was ecstatic at GenCon. Exhausted, too, but enamored by being brought into a hobby that I’ve grown so close to over the years. In a way, my work and blogging and hours spent gaming, were all legitimized for her. She isn’t the scoffing or eye-rolling type, but this trip made things authentic for her. 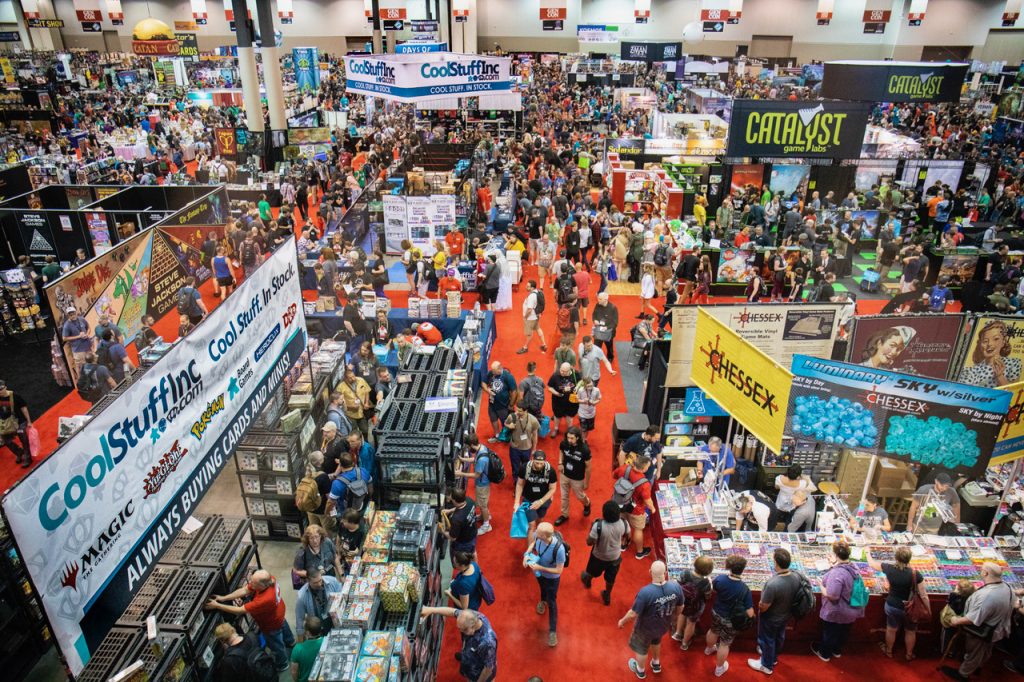 I started playing hobby board games seriously in 2014. At the time, Carcassonne was the only game that existed. I now know more than 3500+ games release annually.

Around this time last year, I started investing heavily into D&D 5e. It took me about a year before I realized people play Shadowrun, Stars Without Number, Dungeon World, and many other niche systems.

When people lump all of us geeks into one category, it’s fairly nearsighted. There are more games, genres, systems, miniatures, and interests in tabletop gaming than I’ll ever get to see or enjoy.

This year, I loved picking up a set of 6d4s and frothing over expensive wooden dice trays. My mind was blown as I perused a booth with tons of old RPG books. The amount of content is staggering, and I’d never given it a second glance until now. This has made GenCon at least 50% more enjoyable.

Get outside of your comfort zone and meet people.

I’ve a tendency to look at handshaking as grimy, but necessary. The concept of networking doesn’t sit well with me, but methinks it’s because I hadn’t taken the time to simply enjoy people. Granted, it’s a challenge to share my faith with clients at the show, but unless I’ve considered their well-being, they aren’t more than a small talk session.

Katie was extremely beneficial for me this year, as she would validate my efforts to meet people. She reassured me that I do indeed care about the people we meet. It’s not just a connection point, and it shouldn’t be.

The few short years I’ve spent in this industry has introduced me to a number of different people from varying countries and various backgrounds.

Unlike many other industries, there isn’t a ton of livelihood to be found in hobby board gaming. Most people running games at booths are volunteers and might not even get paid. Publishers might produce your favorite games, while still working a day job during the week.

These people work extremely hard, and it’s truly a joy to be a part of the madness alongside them. Putting faces to email threads was astonishing, and it helped to solidify that the industry is all in it. Together.

Outside of media or work, you ought to do your best to meet the randoms. Yes, the people you stand in line with to pick up the new core book. Sit down with unknown people in the Rio Grande room while you share catered food. Kick back with the folks you signed up for a 5 hour modern day RPG one-shot.

There are so many unique people in our hobby, and we do one another a disservice to ignore the opportunity to engage each other.

To summarize, of course I was stoked to see Funko have an incredible booth and game room to show off Funkoverse. More importantly, I am equally stoked to return to GenCon next year.

On Friday, as we drove back to my sister’s home (where she generously allowed us to stay during the show) I longingly remembered our moments in the dealers hall. I considered all of the events we could have snagged tickets for. I pondered what an entire day in the BGG Hot Games room or the Game Library would be like.

Katie and I looked at each other for a moment, and together decided, “let’s find out next year!”