If This, Try That: Board Games

Many times, people have a specific board game game they enjoy more than others, so instead of attempting to try something new, they stick to what they know. This is a human quirk in general, and extends beyond gaming. However, one of my favorite tricks to getting people invested in tabletop gaming is to figure out what games they like and choose a game with similar mechanics or theme. By doing this, they not only gain a common thread of interest, but also slowly adjust to trying new alternatives.

Chess is one of those ancient masterpieces studied by the smartest and playable by the illiterate. It’s a game to be taught in a few moments, yet mastered over decades. Not to simplify, but most opponents in Chess are actually easily conquered by learning specific opening moves and counter-plays. The game is ultimately won by the player who more efficiently counters his challenger’s plays. 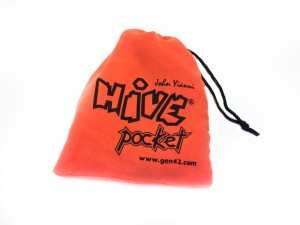 My personal copy of Hive. It’s a travel edition.

Released in 2001, Hive, is a two-player game that bears similarity to Chess. In Hive, your objective is to surround your opponent’s queen hex. You control several different insect hexes, each with a different movement technique. Players take turns placing and activating bugs until overpowering the opposite queen, whilst keeping their own queen safe from being pinned down and surrounded. It’s a vicious, bug-eat-bug world on the table, and you must effectively outsmart your opponent with your army of soldier ants, spiders, grasshoppers, and more. 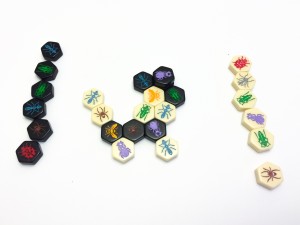 Components are tiles; thus, no worry of getting them scratched up. Setup and tear-down are easy.

I’ve had a lot of fun playing Hive with my wife, and it’s the type of game that gets better and deeper the more you play. You learn how others think, you figure out new ways to best utilize your insects, and you get stumped when expansion bugs get introduced, forcing you to reformulate strategies. It’s a lot of fun, dirt cheap, and comes in different colors, sizes, and packages.

Clue savagely scratches that detective itch everyone gets after watching a really involved episode of CSI that just leaves you hanging, wishing you had chosen a career path in forensic criminal investigation. You remember those sleepless nights, pondering why you had said Colonel Mustard killed Mrs. Peacock with a rope when it was actually with a revolver. Why didn’t your totally “not-random” dice roll get you into the study one turn earlier to provide the info you needed? 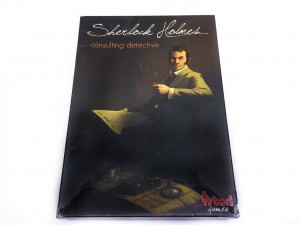 My copy of the game. The damaged corner is due to WalMart shipping. Thanks, WalMart.

There is a reason Clue is potentially frustrating and somewhat devoid of strategy. Reason being: you need lucky dice rolls and chance on your side to successfully make an accusation. However, I propose that Sherlock Holmes: Consulting Detective is a better game. You actually make choices, and when you fail, it is your own fault–not the unlucky roll of dice.

Sherlock Holmes: Consulting Detective is a cooperative game that puts you in the shoes of ragtag runts that scamper through London streets. The goal is to solve one of the ten cases, presented in the game box, before master detective Sherlock Holmes does it first… and believe me, he likely will.

This is a storytelling game. You are given a detailed map of London, a thick London directory, a two-page newspaper, and a book of clues that dictates your case and the results of visiting specific locations. After a player reads the details of your scenario, you set off with only the brains of your fellow players to help solve the case. It’s great fun to visit different, eccentric, characters–even though many of them are rabbit holes and will take you further away from the true solution. 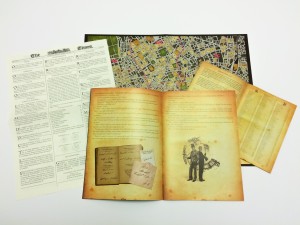 These are the only tools you are given to solve the case.

Once you’ve decided you have visited enough locations, your team takes the ill-fated answers to Sherlock. You then answer questions, given by the dossier, and compare your measly score to the master himself. You probably score in the negatives because of visiting two dozen people that didn’t matter, and Sherlock’s base score of 100 easily overlaps and trumps your pathetic, collective braintrust.

Take note: it was your own fault you lost, and not the roll of dice. This is what makes Sherlock Holmes: Consulting Detective bizarre, whimsical, and also defeating. However, you can’t help but feel you should try the next case, in hopes of stumping and defeating Sherlock. He can’t be that deductively brilliant… right?

If Mafia, try Two Rooms and a Boom

With twenty people at a party and a deck of cards, someone occasionally has the smart idea to propose playing Mafia or Werewolf. Now, these games are not inherently bad, but they both face one glaring issue: player elimination. You end up with six dead people by round three. If you are one of the unlucky murdered, you can’t help but fume as the moronic townspeople continue to kill themselves off, unknowingly giving in to the mafia’s so-called brilliant schemes. Not to mention, you can’t talk, play, or do anything other than sit and stew.

Modern hobby games have moved away from player elimination, mostly because it just sucks for those who lose, and leaves a sour taste in their mouths for the game. 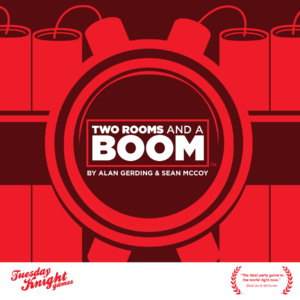 The not print and play edition.

Two Rooms and a Boom pits two teams, of nearly any size, against one another: the blue team VS the red team. The game is literally played in two different rooms, and over three-to-five rounds. Players are exchanged back-and-forth between rooms, with room leaders deciding who stays and who goes. Players are also given hidden identities on cards that illustrate their role for the entirety of the game. The goal of blue team is to keep safe their president, who, at game’s end, must be in the room opposite red team’s bomb player. This all takes place while the red team seeks to discover blue team’s president and knock him out with a giant explosion.

Player roles typically begin simply in order to familiarize newcomers with core mechanics. However, within a few games, you suddenly have a doctor who must meet with the president, an engineer who needs to arm the bomb, oh–and don’t forget about “shy guy” who can’t share his identity with anyone, or the grey team sniper who has to distinguish between the decoy and the target to win, etc. The list is huge, boasting close to ninety different character roles, all developing individual goals and wrecking havoc on the base premise of protecting or bombing the president.

It’s great fun and gets people walking around, interacting, and hiding in a corner while refusing to open their eyes or talk to anyone until either the game ends or they are sent to a different room.

Two Rooms and a Boom was a long-desired Kickstarter that also features an easily-accessible print-and-play for those who want to try before they buy. You can find the PnP here if you are interested.

If Apples to Apples, try The Game of Things

This was a difficult category for me to decide, as I can name six or seven similar games that have more than a modicum of unique fun than Apples to Apples. Call me a snob, but I’d rather have the creative freedom to make someone laugh than choose some random, unrelated card from my hand. This goes for the popular Cards Against Humanity, as well. 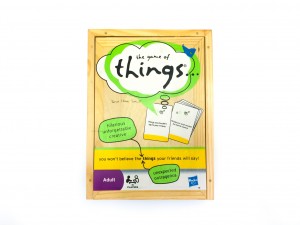 The box looks sort of nice, but doesn’t hold the components well.

Apples to Apples is a giant cardboard stack of random historical heroes, events, pop culture icons, movies, food, etc. where you hope to play a card from said stack that relates to the random, green, feeling, emotion, or idea played during the round. The person who drew the random green card will read the other random red cards played by others, trying to find the one that makes them laugh or relates to the green card or makes no sense, or… something… Who knows? Honestly, Apples to Apples suffers from the Monopoly effect, where people don’t know the rules, or don’t play the game right, and when something goes against design, usually everyone suffers.

The Game of Things is similar, where a player will draw a card with some silly statement like “something I wouldn’t do with my grandma,” or “why I stopped eating pepperoni on my pizza.” The remaining players will then write ridiculous answers on a sliver of paper, with the intention of diffusing their personality in their answer. In other words, they are intending to fool the main player into thinking someone else around the table wrote their answer. No one really cares about the points, and once you go around the table twice, the game ends.

It’s great because the game has a set of rounds, so it doesn’t go on for eternity, and you hopefully will have plenty of unforgettable answers. 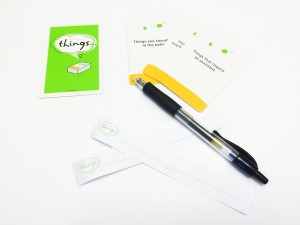 Quickly taught, and full of laughs.

For example: Over Easter last year, my sister lazed out on our brown leather couch all day. She was so relaxed that she hardly moved, and also flagellated throughout most of the day. That night, we played The Game of Things, and a card was drawn, reading: “things you’ve done you don’t want your parents to know.” Somehow, three of the four of us all wrote some wording of the phrase “sitting on a brown, leather couch all day, farting.” We laughed for five minutes straight as each paper was read, almost identical to the one before it. It made for a great night of fun and laughs, and the same phrase was recreated during each subsequent round, which made for even more laughs.

I won’t forget that night, and we have an incredible inside joke we bring up regularly as a result. I’m very thankful we were able to think and develop an answer, instead of hoping for the perfect card draw.

In the next edition of “If This, Try That,” we will talk about next-step alternatives to gateway games. From Settlers of Catan to 7 Wonders, reaching all the way to Star Wars Risk, get ready for new suggestions on commonly-played hobby games.

If you have a game you enjoy, but are tired of playing; and want something similar, but don’t have a clue what to look for, leave a comment below and I’ll either answer or add you to the next edition of “If This, Try That!”