Wesley Cone is a first-time Christian creator, who recently Kickstarted his game Empyrean Hero: the Card Game, and is in the process of finishing the novel Empyrean Hero | Isaac’s Story. Let’s get to it! 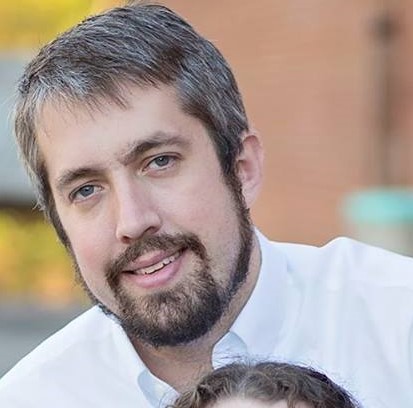 First, tell us a bit about yourself. What first got you interested in board games, and how did that first intersect with your faith journey?
My name is Wesley Cone, and I am a husband, father, former English teacher, pastor, and MDiv student finishing my Thesis. I’ve been playing board games since I was a really, really little. By 4th grade, I was designing my own games. The first time I saw crossover between games and my faith journey was playing Kemps in youth group in middle school at a youth retreat.

Empyrean Hero | The Card Game is set in the universe of a book you’ve written. Tell us about that book’s setting, as well as the process of writing it and getting it published.
Empyrean Hero | Isaac’s Story opens as a story told by a weathered, old man looking back on his younger years. It is set in a future version of earth following a massive cataclysm (and a number of other more normal cataclysms–if one day nuclear wars and pandemic can be considered normal) wherein random natural disasters sprung forth all over the world in a physical manifestation of the veil being torn between the visible and invisible realms. Horde are released into our world, go into hiding, and are eventually treated as if they are old wive’s tales to keep kids out of the alleys and the outskirts of the city, as they begin to try to work their way into the social order in secret. It doesn’t help that the world is quite dystopic with the wealthiest classess living in cities floating above the earth with light rails, hover vehicles, and skyships as the main modes of transportation and the less fortunate living in the ruins of a devastated earth, now known as Tempo.

Isaac is framed for murder and follows a mystery womans into the alleys thinking he has no other choice if he wants to escape the suits. He comes to a clearing of lava flow, and the mystery woman is swimming in it. Needless to say, when she beckons him to join her, he is hesitant. Without spoiling too much, he has a crazy encounter with the River, gains some super cool abilities and finds himself training in the Arena (a training ground, ehrm sky area, for people like him) as he prepares to return to Tempo to rescue his son from the clutches of an imitator. 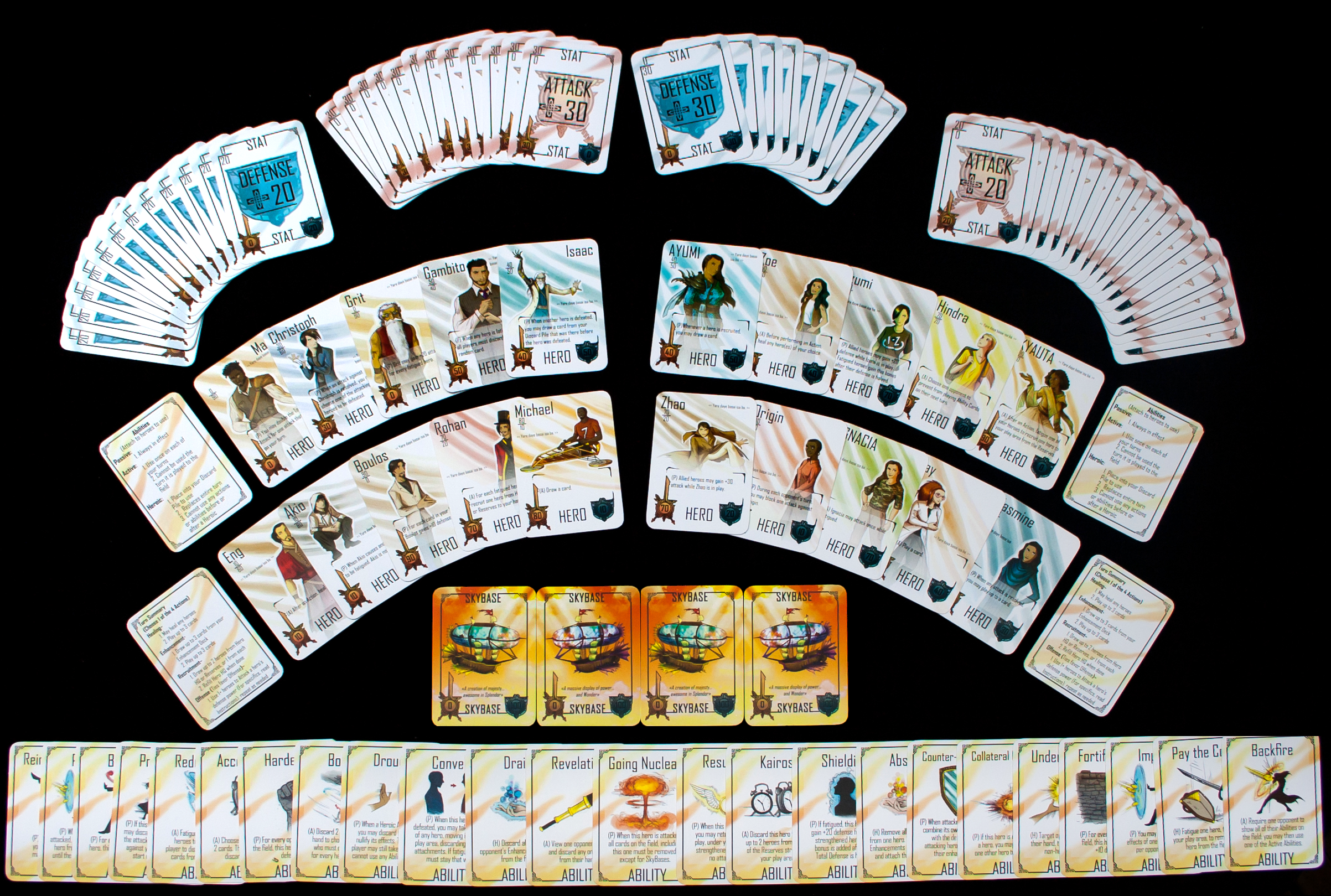 Tell us how Empyrean Hero: the Card Game works. How did you decide on the mechanisms for the card game, and to what extent where they dictated by the setting of the book?
The game is the child of my own gaming experience, as most games are for people. I grew up in the age of strategy card games, and while I’m not interested in Magic or Yu-Gi-Oh for thematic reasons, the concept always intrigued me. Moreover, I never liked the idea of buying booster packs for Pokemon. So, a stand-alone strategy card game where players could create decks at before the game from an open draft was a natural move for me. I’m also a child of the roleplaying video game generation. So, for me including heroes that could learn new abilities and have their stats boosted was essential. I also enjoy recruiting new heroes in games and building out a team; naturally, I added a Hero HQ and Reserves from which to recruit new heroes throughout the game, a market mechanism. Lastly, I am a fan of euro-style board games, so the market, along with engine-building, based on ability synchronization, was an easy step.

How did you decide on a playtest process for the card game? What were the biggest changes you had to make, or the most important principles you discovered?
I started out playing with my neighbor. He was mostly homebound and became a good friend of mine. I then went to my local game store as I think any good designer does. Then, I went to local conventions, partly for public playtesting and partly for audience-building. I had to learn to take criticism from people and decide whether to utilize it or dismiss it after they walked away. I would create lists and run it by other playtesters. One of the hardest bit of being a designer is that no one tells you that your brother-in-law will beat you 20+ times at your own game design, but it was a ton of fun.

For your first game design, you chose to go the self-publishing route with Kickstarter. Why did you choose this path submitting the game to a known game publisher?
First and foremost, I want to maintain creative control over my world. That said, entrepreneurship is in my lifeblood, and learning to run a business is fun for me (albeit trying at times). 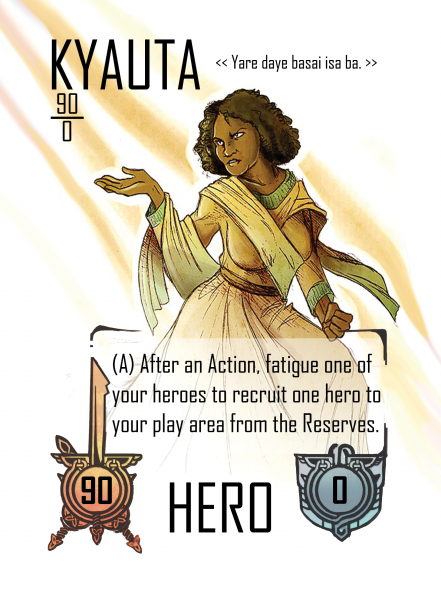 What were the biggest lessons you learned from running your own Kickstarter?
I learned how to start a legal business entity, I learned how to design an attractive website and an attractive KS page. More than anything, I learned how to build an audience on almost no budget. None of that is to mention the spiritual fruit that has been produced in me from perseverance to loving a massive group of people from wildly different backgrounds than myself.

What advice do you have for Christian designers and authors are still working on their first big project?
Do it. Have fun. Talk to God about it the entire time. You are a creator because you are made to create by the Creator.

What games/books/movies/shows/media are you currently enjoying?
I’m currently giving Monster Hunter World a go. I don’t really do cable. There are a couple of other Christian designers that I have had the awesome opportunity to establish working relationships with. I play their games more than just about anything else. I like playtesting for fun. I feel underground. The designer of Portals and Prophets (Andrew Harmon of Harmon Games) is coming out with a new game called Parables, and it is one of the coolest euro-like games to enter into the Christian world. Also, designer Andrew Lowen is working on an epic co-op dungeon crawler wherein players play the role of warrior-like angels defending saints from nasty demons. 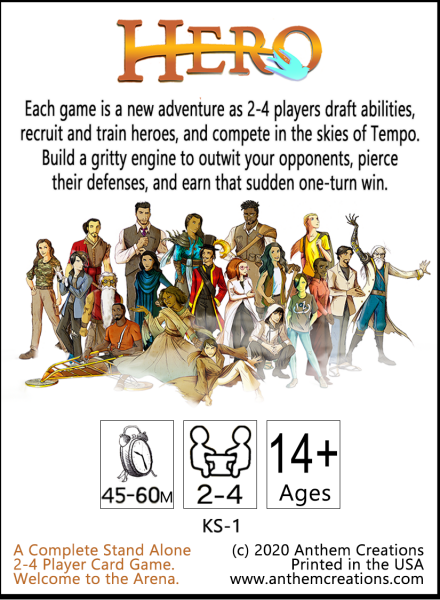 For those who want to purchase the book, the card game, or to follow your future work, where should they look?
-To Purchase the Physical Copy (w/ KS promos while supplies last) or a PNP, click here.
-Search “Empyrean Hero” and “Hero the Card Game” on YouTube for reviews or go to the Kickstarter page to see the old campaign here.
-The Anthem Creations Underground group for staying in the know on a regular basis can be found on Facebook–currently titled “Empyrean Hero | The Card Game (by Anthem Creations),” with a name change coming soon that will be “Anthem Creations.”
-The official book is not out yet. I can’t afford a professional editor currently, but I hope to soon. But, I am more than willing to provide the ROUGH draft for those interested.
-I also have a couple more games in the works currently: a 2 player filler game similar to Splendor and a solo dungeon escape game. Both are based in the world of Tempo.

Anything you’d like to add?
First, I’m thankful for Geeks Under Grace. For anyone interested, feel free to e-mail me at connect@anthemcreations.com with any questions you may have, or send me a direct message on Facebook.

Thank you to Wesley for the interview!