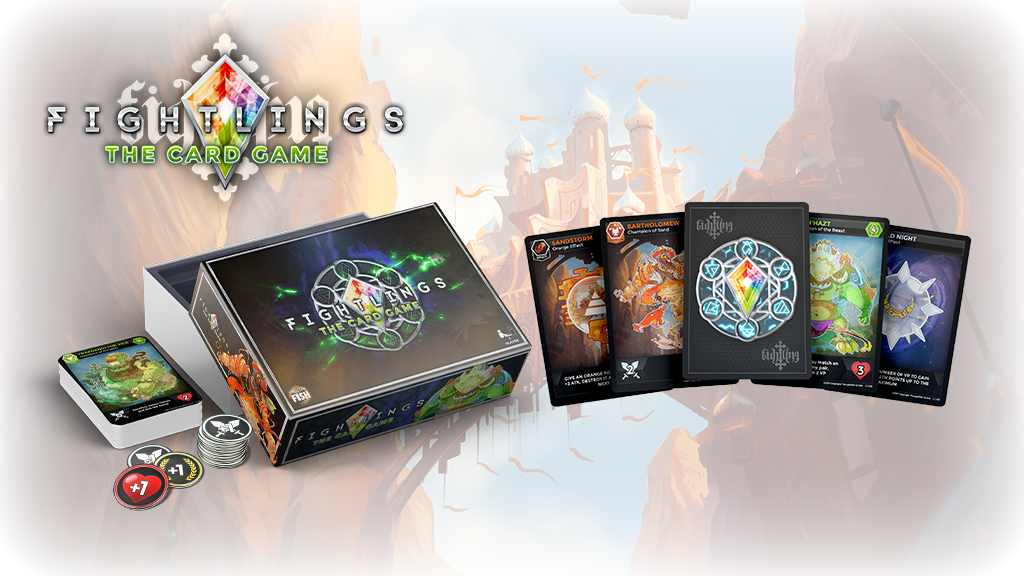 If you’re anything like me, you probably spent a fair deal of your teenage and college years huddled around a table with friends, playing and testing your latest deck build for popular CCGs like Magic: The Gathering, Pokémon, Yu-Gi-Oh!, or more recently, Hearthstone (which actually borrows assets from the World of Warcraft CCG I spent months of my life playing in college).

Enter Fightlings: The Card Game, a living card game that combines CCG deckbuilding and combat with the memory matching card games you played as a child. Created by German company Thoughtfish GmbH, the Fightlings card game is the culmination of two years work in conjunction with their Pokémon Go-esque mobile game of the same name (not yet available in America). 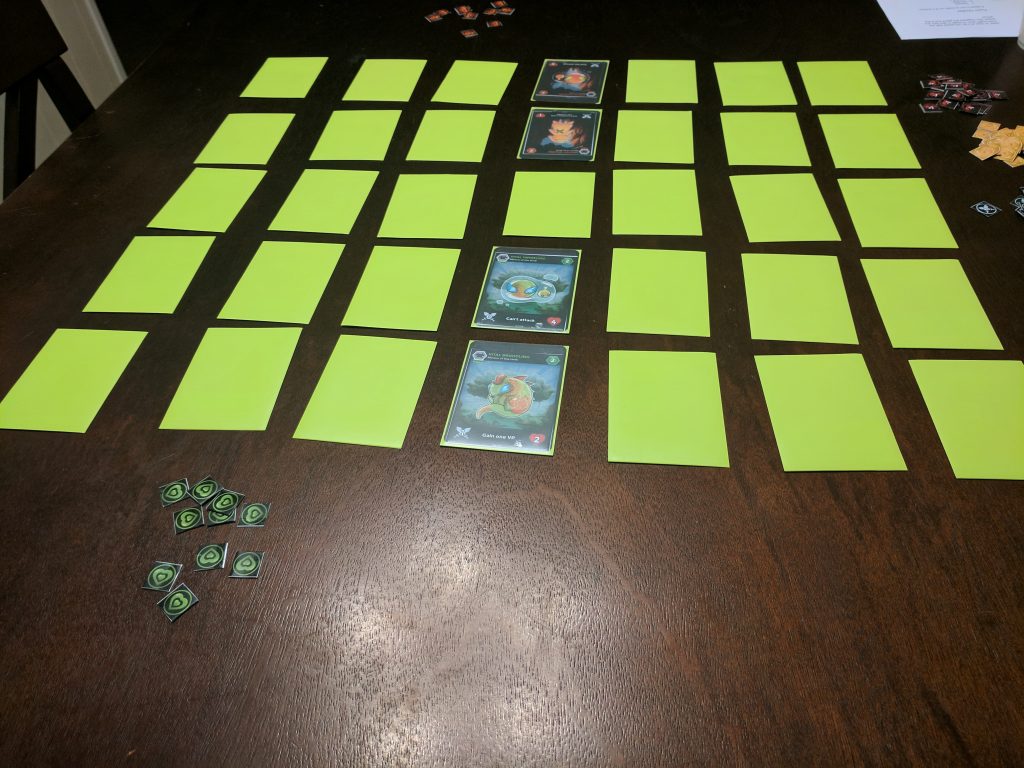 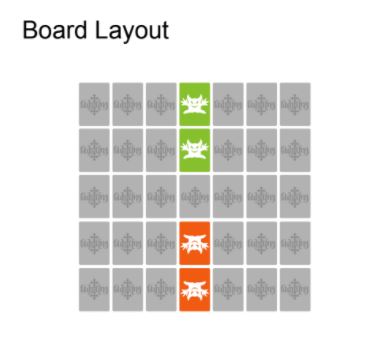 The board should look like this when it’s all set up.

Each player will start with a different colored deck.

The preview I was sent had orange and green in it. Decks consist of 17 cards including minion, fightling, and champion monster pairs and Effect cards that grant some special event. Here’s where things get interesting, though. Each player sets aside two minion cards, then both players combine their remaining decks, adding in one of four random Wild cards.

Once the decks are together, you shuffle everything and deal the cards out into a 5×7 grid, placing the set-aside minions face-up (see accompanying diagram). Each player takes 10 life tokens to track their health.

Once the board is ready, decide who’ll go first (I’d suggest flipping a coin or rolling a die—nothing in the rules I received explained the process). A player takes his turns until he runs out of health, accrues 10 Victory Point tokens, or the board has no cards left to flip.

Each turn consists of three phases: In your Upkeep phase, you’ll untap (or “unfloop” by Fightling slang) any creatures you had attacking previously as well as resolving any status effects (like poison) affecting your creatures. After that, you have the option to enter a Combat phase, allowing you to declare creatures to attack your opponent (denoted by tapping or “flooping” your attacking creatures). They can then choose to declare defenders, damage resolves, and the Combat phase ends. Once combat is resolved, you have my favorite phase of the gameplay loop: the Reveal 3 phase. 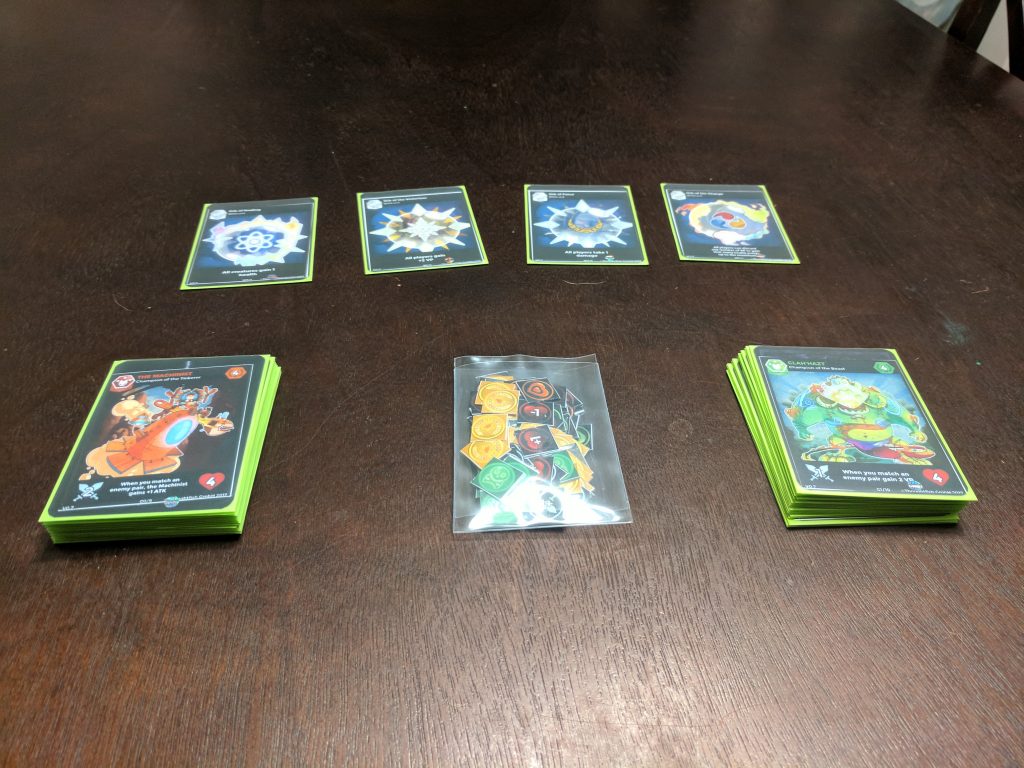 While it sounds straightforward, a lot can happen during the Reveal 3 phase. A player will start by flipping over 3 cards, resolving any effects of a flip before moving onto the next flip. Matching two creature cards pulls them off the board and into the owner’s Creature Zone. Unveiling an Effect card triggers its effect immediately (as does revealing the Wild card).

If you unveil a matching pair of your enemy’s creatures, he gets the monster in his Creature Zone and you’re awarded Victory Point tokens based on the number in the top-right of each card (highlighted in image below). There’s a surprising amount of strategy, memory, and luck involved in the Reveal 3 phase as this can be the engine that drives you to victory or sets your opponent up for the high life.

For a pledge of ~$36 (€30), backers will get a full box set that comes with two decks (and plenty of extra cards to accommodate deckbuilding), as well as a full set of tokens and a rule sheet.

Start to finish, Fightlings takes around 5-15 minutes to play, so you can churn through several games quickly. If their Kickstarter campaign succeeds, I imagine deckbuilding will probably eat up the bulk of players’ time as you create and playtest. For folks looking for a fun, quick game with some CCG flavor, Fightlings looks like a solid option.

Check out the Fightlings Kickstarter! 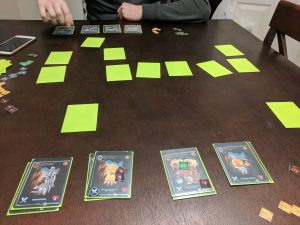