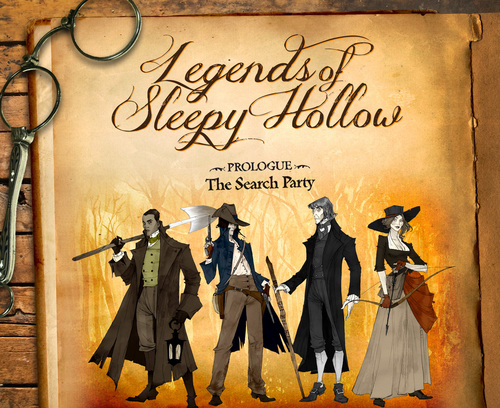 A Bit of Background

We’ve all heard tales of Ichabod Crane and his unfortunate run-in with the headless horseman, but what else happened in tiny Tarrytown? Legends of Sleepy Hollow puts players in the roles of one of four characters. Together, the team explores the spooky landscape of the small town, trying to discover the possible fate of Ichabod.

Legends of Sleepy Hollow is a Kickstarter designed by the design duo of Ben Pinchback and Matt Riddle (Wasteland Delivery Service, Fleet, Morocco, Ladder 29). The game is published by the Dice Hate Me section of Greater Than Games, who’ve also released Viva Java: The Coffee Game, or my favorite worker placement title: Brewcrafters.

A Character for Every Player 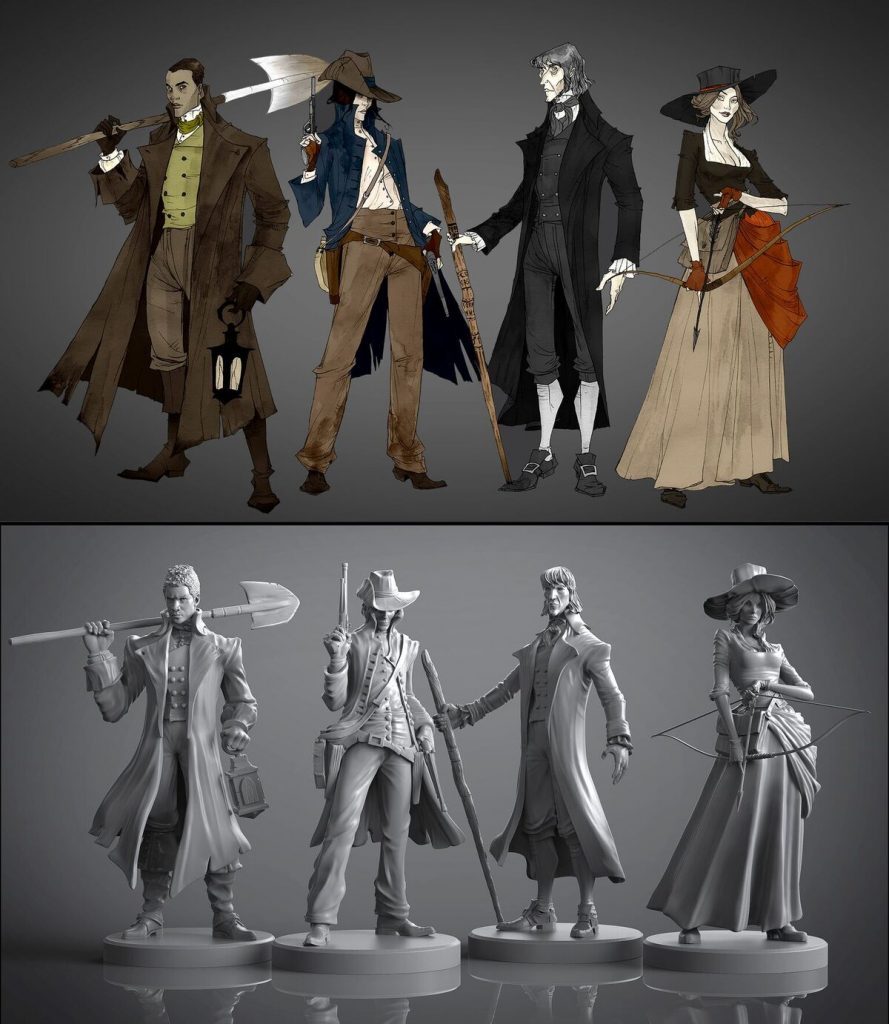 Illustrations of each hero, alongside 3d renders of each miniature.

Legends of Sleepy Hollow is a cooperative miniatures experience. Pincke is an excellent tank, and excels at dealing big melee damage up close, as well as brushing off weak attacks with his thick coat. Van Winkle is a talented archer who can pinpoint enemies in the distance, delivering consistent damage from a safe range. Kappel plays the role of support and can heal the team, as well as deal big area of effect attacks to groups of foes. Finally, Matthias Geroux is a sort of McCree (Overwatch) gunslinger who wields a pistol that can hit hard when he’s accurate.

This diverse group allows each player a chance to find the role they most prefer. From an RPG perspective, players coming from A-RPGs, tabletop RPGs, or even MMOs will find a suitable position to play. Want to support the team with buffs? Play as the minister. Prefer a DPS role? Here’s the stuff for Geroux. I prefer the role of tank so Pincke was my first choice. I was able to position myself to take the brunt of damage and move in for big hits when the time was right. 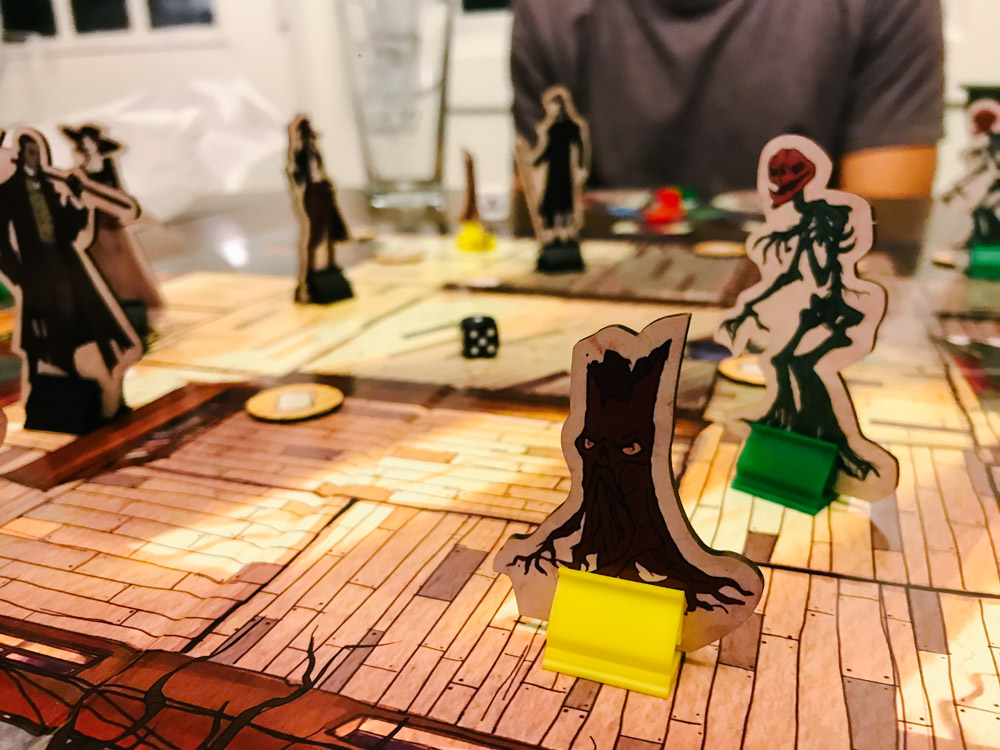 This stump needs to get shoveled.

Each mission of Legends of Sleepy Hollow unfolds the story of the game. Players will uncover equipment for use during missions while trying to complete their main goal. These items can be swapped between characters to help build out kits during each game.

On a player’s turn, he can either move, then use an ability, or use an ability, then move. While each player has a few of the same basic abilities (resting/calming, attacking, environmental skills) he also starts with two special abilities and a stack of action tokens. These tokens are the crux of the system and are placed onto an action space when used. To check a token, players simply move to the space and use the environment action. To battle an enemy, a player moves into range and adds any dice or extra damage to his main weapon. I love how understandable this approach is, because it wisely simplifies the sometimes convoluted aspects of dungeon crawlers. 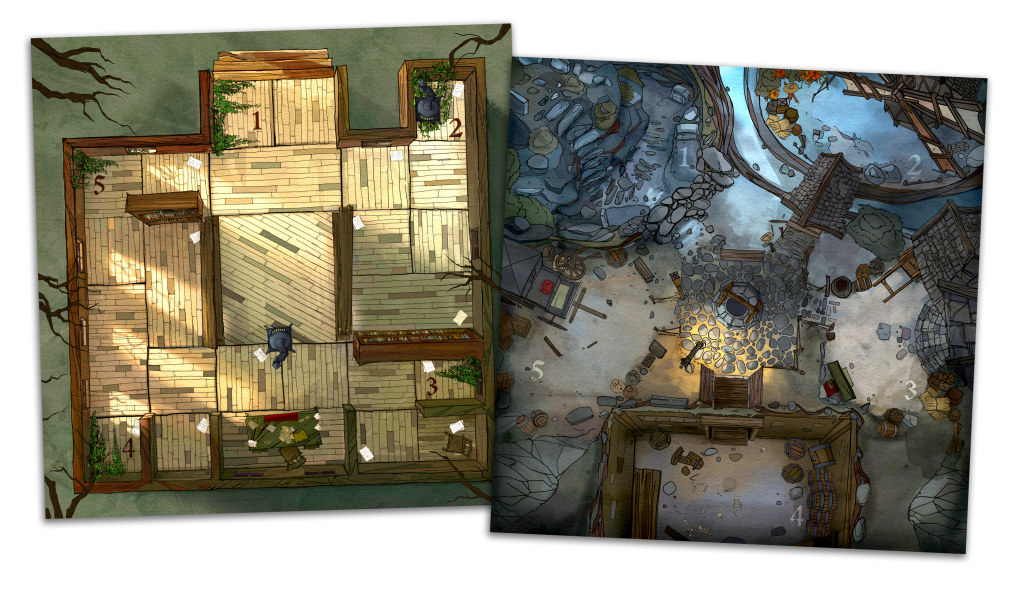 The front and back of a board.

Since special abilities can’t be used when occupied by the token, a player needs to spend all available tokens to reset them. This thematically recreates the idea of trudging through a spooky location, fighting foes to the death, and taking time to catch a breather. Typically, once a player uses four to five actions, it’s time to reset, which is important because special abilities are the key to dealing big damage to enemies. However, this isn’t always so easily achievable. If a player is ever attacked by an enemy, that player must take a fear token. If a player is ever hit hard (3 damage or more), that player must take two fear tokens. These tokens (at least in the first mission of the campaign) are added to a player’s token total, and serve no purpose other than forcing that player to take more actions before resetting his token pool. This again acts towards the severity of the situation, as players are constantly bombarded by foes and fear.

After each player has taken a turn, the enemies move. Movement is simple, where enemies creep one space toward the nearest character, or in case of a tie for distance, choose a specific character based on the mission. Like characters, enemies do base damage and/or add a die to combine additional hits. Some enemies are short-range minions, while others can hit at distance. The first mission includes only two: Shrickroots and Gobkins. These vegetation-based foes will drag themselves about and every other round, spawn more to the board depending on a die roll. If enemies need to spawn and the supply pool is empty, the players will lose the game. Of course, if a character’s health pool is depleted, the team loses the game as well. 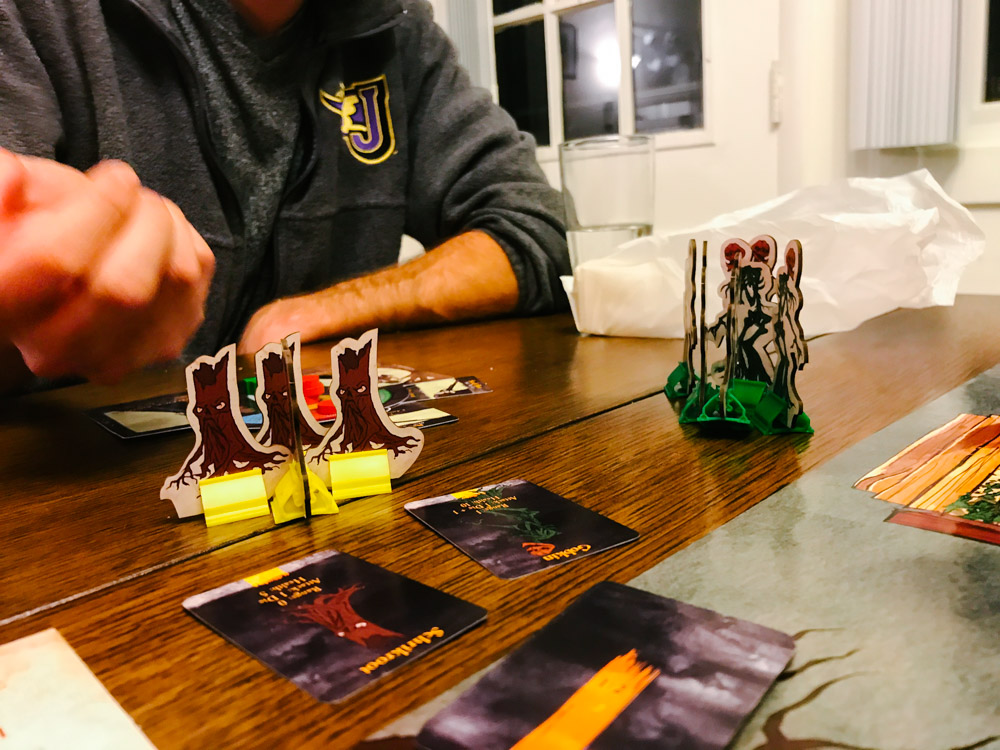 Preparing to roll a die for combat results.

Legends of Sleepy Hollow is so simple to learn and set up. The guide I was sent made it very easy to teach my group and gave plenty of flavor text to get my friends familiar with their characters. I read some prologue writing to the table (which wasn’t cheesy or poorly written) and walked players through their turns. Sure, the end goal for us was simple—to find two specific tokens on the board—and we might have achieved this rather quickly, but players need to decide when and why to use which abilities. Our situation involved us wasting strong abilities on the weak Shrickroots instead of taking down the higher HP Gobkins. We quickly learned our mistake when my character (Pincke) had to step into tank the big, ranged hits from the Gobkins. Luckily, the minister was quickly available to heal Van Winkle, who was nearly crushed in a single blow. These big attacks caused fear tokens to amplify, which resulted in a longer period of time before we could strike back with bigger hits.

Legends of Sleepy Hollow doesn’t even waste time with determining line of sight and impassable spaces. The rules make it very simple to understand when and where players are within sight by allowing only orthogonal movement and attacks. Knowing enemies can only move a space also makes this easier. I reckon Legends of Sleepy Hollow is easier to pick up than Star Wars: Imperial Assault. Having an AI control movement (which happens efficiently and quickly) is another bonus.

I won’t spoil the events that take place after completing the team’s objective, but if it’s anything close to the events of the other seven missions, I expect Legends of Sleepy Hollow will provide ample opportunities for twists and exciting storytelling. Another thing driving story and replayability is once a mission is accomplished, players can choose an additional skill or upgrade their equipment to progress their character and make them more valuable for future missions. I love this inclusion, and I think it will add a lot to keep players engaged, ready to test their new skills on new foes.

A render of Emily’s model.

My photos here are all prototype pieces.

The Kickstarter will include miniatures for both enemies and each player’s character. In addition, artwork will change on skill cards, so instead of zoomed in illustrations, artwork will be unique to help differentiate skills from one another. Enemies will also feature twistable dials underneath that depict the enemy’s health pool. Each hit means a player simply turns the dial to reflect the new health total. This makes fighting easy, as if it wasn’t already easy enough to track. There will likely be other changes that will be made clear on the Kickstarter page. The game is expected to be in backers’ hands by December of 2018.

Check out the Kickstarter launching today! 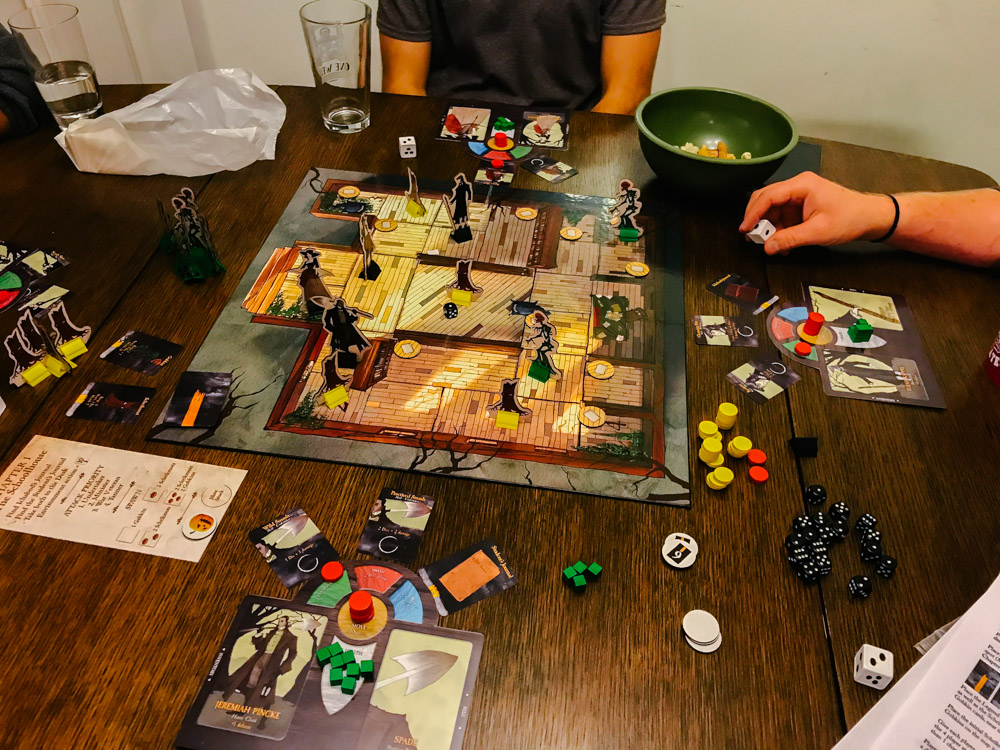